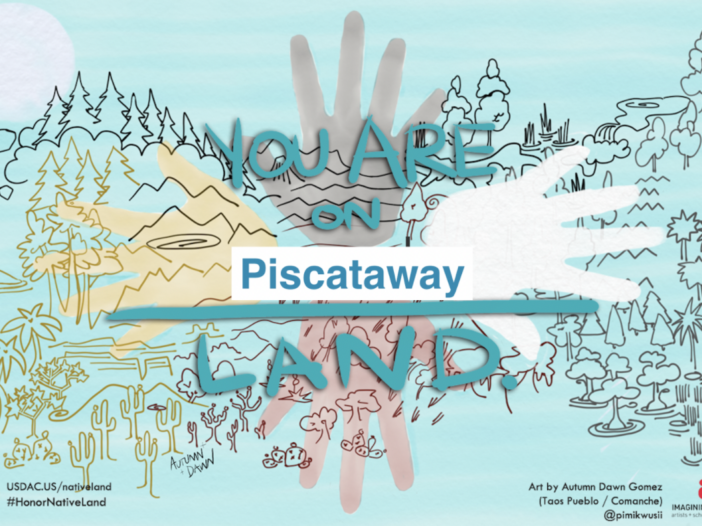 Candice Powers (COL ’22) and Cleo Gates (COL ’22) released a podcast series as a part of the Core Pathways Program “Pathways for People and Planet,” to highlight the environmental perspectives, experiences and knowledge of traditionally marginalized groups of people with respect to the climate crisis.

In this episode, Powers and Gates discuss their first podcast episode, “Indigenous Wisdom & Landback,” and critical takeaways for listeners as well as on- and off-campus resources to learn more about the initiatives discussed in the episode. If you are interested in learning more, the full podcast is linked here.

MR: On today’s episode, we have two very special guests, Candice Powers (COL ’22) and Clio Gates (COL ’22). They’re both a part of the Core Pathways program here at Georgetown and are here today to talk about their podcast series “Pathways for People and Planet,” a podcast that strives to highlight the environmental perspectives, experiences and knowledge of traditionally marginalized groups of people in the context of the climate crisis. The first episode of this series is called “Indigenous Wisdom & Landback,” which discusses Indigenous ways of thinking about and relating to land and is what we will be discussing more of today. Without further ado, I’ll let Candice and Clio introduce themselves and tell us a bit about this program and their podcast.

CP: Hi, everyone. I’m Candice. I’m a senior in the College majoring in environmental biology and minoring in Women and Gender Studies, and I’m originally from Maine.

CG: I’m Clio. I’m also a senior in the College. I’m majoring in justice and peace studies and minoring in environmental studies and African American studies, and I am originally from Cambridge, Massachusetts.

MR: So for listeners who don’t know, can you tell us a bit more about what the Core Pathways program is?

CP: Definitely. So it’s housed under The Red House Designing the Future(s) Initiative, which is part of Georgetown, and the Core Pathways program is a series of classes that are an alternative to the core curriculum at Georgetown. So it’s approaching topics like history and theology, but through a climate change lens. So that’s their primary role right now. But they also do a lot of outreach with students: both Clio and I are part of the fellows program. So we’re working on the podcast. Clio’s doing the salon series with speakers. So they’re more about educational innovation development, like alternative learning styles, I think.

MR: So why did you decide to start this podcast series, and what is the importance of it?

CG: Originally, Candace was the one assigned to this project, and there was a Core Pathways podcast before, started by previous fellows. But I think we’re really excited to kind of do something a little different, and bring in people in Georgetown, but also outside of Georgetown. And I think when we were brainstorming ideas, we noticed that everything we wanted to talk about was the description that you read out. So kind of highlighting traditionally marginalized populations in the context of the climate crisis. And so that’s what led us to “Pathways for People and Planet,” and then we just kind of, it didn’t fall into our lap, but we were just reaching out to different people. And for this podcast, the guests involved were the people that just kind of responded. And we’re really excited about talking to students.

MR: So can you tell us a bit more about who you interviewed in your podcast “Pathways for People and Planet?” And how that worked out? I know you just touched upon it a bit. But to expand on that point.

CP: Yeah, I can talk about Abigail, I am part of this network in DC called the Woman’s Aquatic Network of DC. And I actually did a book club with Abigail Hils this past fall reading Robin Wall Kimmerer’s book “Braiding Sweetgrass,” and she was the moderator of that book club. So I reached out to her because I just loved speaking with her about that. And so she was really happy to serve as our moderator for this conversation. And then Clio if you want to talk about …

CG: Yeah, I procrastinate a lot. And when I’m procrastinating one thing I do is if the class schedule is out, I like to look at all the classes, and I’m like, here are all the classes I might want to take and stuff like that. And I do some keyword searches. And I’m a justice and peace studies major, so I was always really interested in Indigenous perspectives on things, and since my freshman year, I would put into the little search box “Indigenous” or “Native American” and nothing would ever pop up. And then I think maybe my sophomore year, I put it in and then Shelbi popped up teaching a class. I think it was “Intro to Indigenous Philosophy,” which I didn’t get into. But since that moment, she was kind of on my radar, someone that I really wanted to take a class with, and was really interested, and had encountered her in a few spaces, giving talks and moderating stuff. So we reached out to her, and she’s a professor in the philosophy department here.

CP: And then she put us in contact with Cinthya, who is a postdoc here. They have worked together on a few projects. We spoke with Cinthya, and she added a lot of great perspectives, especially for outside the U.S. So it was such a great group of people that came together.

MR: Yeah, that sounds like it came together really well, and it worked out really effectively. What were the biggest takeaways from the interview you conducted in your podcast and key ideas, and kind of what did you want listeners to take away the most from the podcast?

CG: Well, I think first and foremost, the way that we approached creating this podcast was super intentional, and Candice and I came into it with very little knowledge on Indigenous wisdom and stuff like that. And I was definitely nervous going into it. And I was like, I don’t want to mess anything up and the grace with which Cinthya and Abigail and Shelbi approached us was, I think, really special. And I think I learned a lot from just our interpersonal interactions. And so I think my first takeaway is kind of just like, don’t be too scared to learn something new, especially when it’s about people who are different than you, I think, come from different places. And then I think, secondly, their discussion of landback is really interesting and of land acknowledgments, and land acknowledgments, obviously have rose in popularity in the past few years but can be very generic. And we had a really interesting discussion about land acknowledgments at Georgetown, and kind of like, the ways in which land acknowledgments can become almost like I don’t want to say meaningless, but like can lose some meaning when they’re just like, not kind of catered to specific audiences. So if every single department of Georgetown has the same land acknowledgement, that’s not really authentic. And while we, again, didn’t really know what we were doing, when we worked on creating our own land acknowledgement for the podcast, they were just like, it needs to come from you and come from the heart, and that’s what will shine through. And we know that you’re still working and you’re still learning, but what’s important is that you’re approaching it authentically, and intentionally. I don’t know what you have to add to that.

CP: I think maybe the word you’re looking for is performative of the land acknowledgements because talking to Shelbi about this, it was with Georgetown, it was kind of like, oh, this seems like something we should do. Let me copy paste this onto my website, instead of taking the time. Like Clio said, we were very kind of ignorant about a lot of these topics going in. And so I think that’s something we can all learn from is learning the history of where we are, especially at this institution. And I think something big I took away was how intertwined these ideas of colonialism are still today. And I know Shelbi and Cinthya talk to that a lot. It’s not really just like, oh, something happened 300 years ago, and we have to pay people back for that. It’s still ongoing today with just our mindsets and how we approach issues like land back, and they talk about scientific inquiry and how that impacts whose voices and opinions we value today and works into how we treat land and how we, like, develop in stuff like that. So I learned a lot about how our mindsets are kind of ingrained this way, unintentionally, a lot of the time. But it’s more important to realize it and try to reverse that.

MR: From your podcast, what did you learn? Are there some resources available both on Georgetown’s campus and off that can kind of help students learn and engage with this topic?

CG: I think the biggest resource is just kind of self-education, and we and our podcasts post on a Core Pathways website. We link a whole ton of resources. And I think that’s the biggest thing that I would encourage people to do. And also, Shelbi is so approachable. And I think you could definitely reach out to her too. But also, yeah, there are just people who are constantly fielding requests from all different parts of the university, which I think can be hard.

MR: For sure. And do you guys hope to continue producing more episodes as a part of this podcast series, and kind of what are your plans for the future?

CP: Yeah, our second topic that we’re currently reaching out to people about right now is kind of gender and sustainability and female perspectives on climate change issues. So that’s the overall topic. We have one participant right now, who works on a lot of things like sustainable agriculture. And we’re looking for another interested person, so if you know anyone, but yeah, I mean, we’re both seniors, so we hope that the Core Pathways team will kind of take this over and add their ideas. But as of now, we’re trying to do one more episode before we graduate.

CG: Yeah, you would not believe the amount of time it takes to, I don’t know, just get everything together. And then once, I’m sure you know, but once you record stuff, to edit it, it was like, probably like 30 hours of work realistically.

MR: Yeah, no, I am so excited to hear the next episode. And I really hope that someone does continue your series because it’s so informative, and so interesting. Before we close off, I just wanted to ask you both: Is there anything else you’d like to add?

CG: Listen to the podcast!

CP: Give us views. Yeah. I think I just uploaded it to Spotify. So I think that’s probably the easiest way for people to listen now. But you can follow the channel. And so hopefully, as we post our episode and hopefully next year going forward, it’s easy to get those notifications that we’re still working on it.

MR: Yeah, and we’ll link the podcast in the bio below so you guys can take a listen. But thank you so much both for coming on. We really appreciate it, and I’m so excited for people to listen.

CP: Thanks for having us.

MR: This podcast was recorded, edited and produced by Mia Rasamny. A special thanks to Candice Powers and Clio Gates for taking the time to speak with The Hoya.