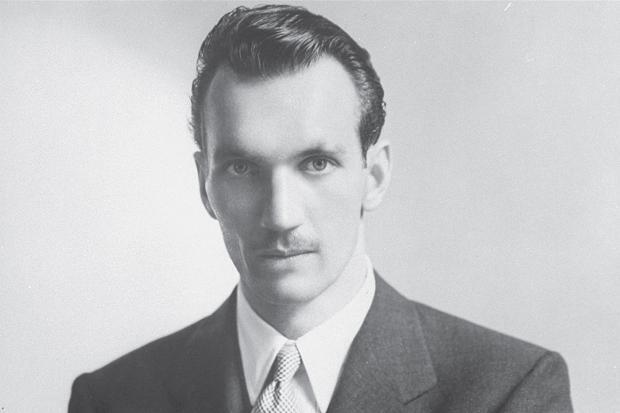 When Derek Goldman, co-director of the The Laboratory for Global Performance and Politics at Georgetown University and professor of performing arts, was approached by the university back in 2014 to create a performance in honor of Jan Karski, Polish soldier and resistance fighter during World War II as well as a former Georgetown University history professor, Goldman didn’t hesitate.

Partnering with Academy Award-nominated actor David Strathairn, Goldman put together an ensemble production about Karski’s life and his commitment to sharing the atrocities of World War II he witnessed first hand. However, there was something about Karski, his solitude and the power of his memory, that begged for creating a whole new kind of production, according to Goldman.

So, seven years later, that production is making its global debut. Listen to Goldman discuss how “Remember This: The Lessons of Jan Karski,” a one-man show that explores not only Karski’s legacy but how his story serves as a call to action today.

CW: This podcast discusses depression and suicide. Please refer to the end of the article for on- and off- campus resources.

DS: For 35 years I never mentioned, even to my students, that I took part in the war. I wanted to forget the degradation, the humiliation, the dirt. I was forgotten and I wanted to be forgotten.

GB: That there was the voice of Oscar-nominated actor David Strathairn. You can’t see it but imagine that he’s standing in the middle of a stage, dark other than a single spotlight shining down on him as he sits at a desk. Strathairn’s presence on the stage is strong, his figure almost never still as he delivers his lines. He looks out at the audience, his white hair combed back smooth, embodying the role of Jan Karski, Polish soldier and resistance fighter during World War II as well as a former Georgetown University history professor.

DS: You may consider what I am saying some kind of ancient terrible myth rather unreal. It’s difficult to visualize. The mind cannot absorb that it is real, that it really happened. So it becomes a myth. All I can say is that I saw it and it is the truth.

GB: The clip you’re hearing comes from a production titled “Remember This: The Lesson of Jan Karski.” The single-man show, produced by The Laboratory for Global Performance and Politics at Georgetown University, was first performed in 2019 before heading to London in January 2020 to commence its global tour, though of course the COVID-19 pandemic brought that to a halt. Now, the story of Karski is headed back for its re-debut on stage right here in Washington, D.C. on Oct. 6. For those who don’t know, a statue commemorating Karski sits beside White-Gravenor Hall. So to learn more about the man immortalized on a bench right here on campus and this upcoming play, I spoke with Derek Goldman, a professor of performing arts here at Georgetown, co-director of the Lab and co-writer of “Remember This.” Here’s what he had to say.

DG: Karksi was a tremendous figure, a kind of compass of that kind of moral courage, and I think part of what has made us fall in love with this story at this time as we see it as really, really deeply resonate with the kind of current moment and the questions especially that young people are asking themselves as they encounter injustice in their own lives.

GB: Jan Karski was born in Poland in 1914 where he would eventually go on to serve as a liaison officer of the Polish Underground, one of the largest resistance forces against the Nazis during World War II. Karski is known as one of the first individuals to relay his accounts of the Holocaust to the world when he met with President Franklin D. Roosevelt in 1943, pleading with the US president to extend the Allied intervention in aid of the Jewish people back in Poland.

JK: I had no chance except my initial statement to tell you ‘Mr. President, listen to me.’ Well, you don’t speak to the president of the United States. No Jewish problem was mentioned until the end of the conversation which lasted one hour, 20 minutes.

GB: Through his work with the Polish Underground, Karski undertook many missions to reveal the atrocities committed against the Jewish people during the Holocoaust. He managed to infiltrate the Jewish Ghetto in Warsaw, Poland, twice, witnessing what he would later describe as “degradation, starvation, and dead bodies lying on the street.” Other times, Karski posed as a Ukrainian guard at the Izbica transit camp, where he saw countless Jewish families packed into train cars and sent to their deaths.

In the years following the war, Karski traveled once again to the United States where he began writing his book, “The Story of a Secret State” and earned his PhD at Georgetown University, then becoming a professor of history here.

JK: The Allied nations are going to win this war. Your country will be alive again, more prosperous than before. Criminals will be punished.

GB: The origin story of Derek Goldmn’s production about the life and legacy of Karski goes back to 2014, when Goldman was approached by the university who was organizing a celebration of 100 years since Karski’s birth.

DG: It took that ask for me to dig a little more deeply into his story and really come to understand the singularity and the power of the story. And in that moment of being asked I immediately thought of David Straithairn who was an actor that I had had the privilege of working with on a couple of previous projects and, you know, a brilliant, brilliant Academy Award-nominated actor, but why I thought of him was there was something about the fierce humility and kind of noble, gentle noble strength of Karski and the kind of elegance and depth of spirit that reminded me of David.

GB: Strathairn didn’t hesitate. He made his way to Georgetown and, alongside Goldman and Clark Young (COL ’09), a graduate of Georgetown College in 2009 and Goldman’s fellow co-writer, launched into putting together a performance about Karski. The show was first performed as a kind of ensemble piece, with students filling the stage with Strathairn. But as Goldman kept revisiting the production, he saw that it had room to grow.

DG: Not because it didn’t work as an ensemble piece, I actually think that’s a really interesting play. There was something ultimately about Karski’s solitude and the singularity and privateness, you know he held this story for decades without the world knowing of it, that felt like it really lent itself theatrically to that sort of, to this one-man performance.

GB: So Goldman and Clark got to rewriting. What would a show with just Strathairn at the helm look like?

DG: You know because the key in theater is what makes it active? We knew we didn’t, it’s not a piece that’s an evening with Jan Karski and he’s chatting. There are pieces of theater like that. But we knew we wanted this to be intensely theatrical, visceral, alive and that’s sometimes hard with one person because the sort of feeling is how do you get conflict. But what we found with Karski is that there’s so much drama in the relationship between the different selves that he’s occupying, the kind of memory of what he endured and all the trauma that he faced and then the different kind of ways he needed to present himself as a teacher, as a messenger.

GB: I asked Goldman what his favorite part of the show is now that it is just Karski’s individual narrative. Though he described it as a bit like having to choose your favorite family member, Goldman nonetheless was particularly struck with a portion of the play in which Karski’s professorial self, his identity as a messenger, unravels. It’s an emotional exploration of all that Karksi had seen and witnessed. How does one stay whole when you carry that much within you?

DG: So it’s the memory of these beatings that he took at the hands of the Nazis and surviving a sucide attempt he makes, an escape from a hospital window, and then he’s in the water. There’s this kind of incredibly physical part of the piece. And I think what’s so powerful is that David is 72 years old and is kind of this incredibly fit, great shape actor, but what you see there is the elegance Karski who the play begins with, the professor, in the memory of the pieces, has been kind of stripped away. For part of that section he’s just kind of in his undergarments and I think you forget that you’re watching a one-person show or that you’re in a classroom with a desk, and you’re really in this prison cell and these other spaces. And it’s all through the kind of, the way an actor can carry sort of almost different sedimented layers of identity.

GB: But despite everything Karski witnessed, the atrocities he saw committed against innocent people, the show is still meant to be a hopeful one. It’s not about looking back and seeing where we could have taken a different path. Rather, according to Goldman, the show is supposed to make the audience think about looking forward, looking at their today.

DG: Where is this happening now? Because versions of it are. And how are we implicated? And what are we to do about it? Which is a very Karski question. And so for me actually the piece has heavy themes and content, but the reason that it’s hopeful is not because there’s some false uplift of happy ending. The hope is in the fact that there’s a kind of a sense of a call to action and to engage dialogue at the end. And the hope comes from the idea that Karski’s work as a teacher, as a witness is still alive and burning in the potential energy of young people who are like, ‘Oh, I’ve got to do something with this.”

GB: “Remember This” begins its global tour at the Shakespeare Theater here in D.C. on Oct. 6 before heading to Chicago, then Poland, and later Berlin. From there, it really depends. With covid restrictions constantly shifting and the show still being relatively new to the global theater world, G0ldman is working on where this production will head.

DG: Unless you were lucky enough to be a Georgetown student who was in Gaston Hall or some of those people in London, this is our premiere really at the Shakespeare Theater. So we’ll also see who gets interested and kind of do it based on that.

GB: This podcast was recorded, edited and produced by Grace Buono. Special thanks to Derek Goldman for his enthusiasm in speaking with me. You can learn more about where to see “Remember This: The Lesson of Jan Karski” on the The Laboratory for Global Performance and Politics’ website. That’s all I have for you today, tune in next week for more.