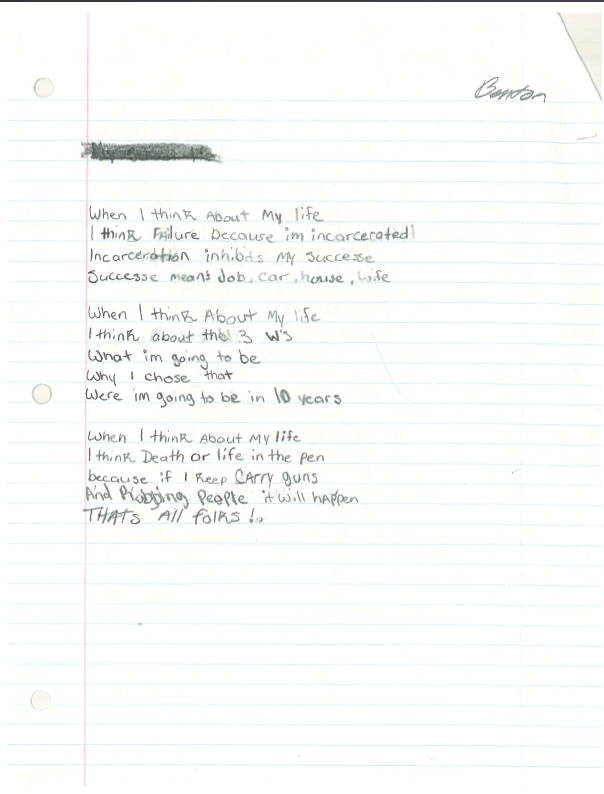 How’s this for coincidence? In 1995, the late hip-hop icon Tupac Shakur, then 24, was serving a sentence at Clinton Correctional Facility in upstate New York for a crime he and many others said he didn’t commit. While incarcerated, this video was recorded of a deposition in which Shakur explains the passion for poetry he developed as a teenager.

Also at Clinton in 1995 — on the same block of cells, in fact — was Marty Tankleff, who was serving the fifth year of a 50-year sentence after being convicted of murdering his parents while a high school senior in Port Jefferson, N.Y. Tankleff was released in 2007 when evidence emerged proving his innocence, in part due to the work of Marc Howard, a government professor at Georgetown and Tankleff’s childhood friend. That experience inspired Howard to develop Georgetown’s “Prisons and Punishment” course, which explores shortcomings in the U.S. criminal justice system.

At the root of both stories is unrelenting optimism, which was evident at the Incarcerated Youth Program at Washington’s Correctional Detention Facility when students in the McDonough School of Business “Courage and Moral Leadership” course visited throughout April. There, Georgetown students worked with groups of 16- and 17-year-old boys, who can attend IYP in pursuit of their high school diploma. The teenagers author poetry as part of their coursework, and students from Robert Bies’ class were able to acquire some samples. The Hoya was not permitted to publish the students’ names.

Below are reflections from the nine-member group of Georgetown students on their experience at IYP.

At IYP I had the opportunity to spend some time with a young man named Charles. I first connected with him through my fascination of a drawing he had done for his art class that depicted a face that was divided into two expressions. The left side was meant to show his former self, and surrounding that part of his head were words such as “rage” and “hate.” The right side of the face was brighter in color and depicted the true self for which he wants to be perceived. On this side of the drawing he surrounded his head with the words “kindhearted” and “smile.” After helping Charles convey the meaning of his drawing into an essay, we sat down for lunch and talked about life, goals and regrets. He explained to me how it’s easy to make a mistake when you’re surrounded by people setting a bad example for you. It was an important reminder of how big of a factor your surrounding environment is to how your life plays out. He told me about his goals of attending Howard University, finding a good job and starting a family. Needless to say, I left the Youth Center that day with a great deal of optimism.

On the second trip, we went to the correctional facility and were met by one of the program workers while going through security. The actual IYP is deep within the building, behind narrow corridors, and three or four airlock-style doors. There was no natural light, and while inside, we had no idea where we were in the building. The cell block itself was divided into two parts: the traditional cells on two floors with a mess area in the middle, then classrooms and a tiny gym room on the other side. When we went into the classrooms, there were computers, reading lists, paintings and drawings done on the wall. They looked like any other normal classroom, but without windows and not much larger than a typical dorm room. A couple of the students chose to come do poetry while we were there, and eagerly went right to writing down their poems after being given a prompt. As they opened up to conversation, we found that they were really curious about life outside the IYP. They wanted to hear about sports, girlfriends and parties, as well as our majors and jobs. They all had creativity and craved the outside stimulation that often fuels creativity. When we asked how they stay sane and keep from being bored by the grind of their daily routine, all of them answered “reading.”

When we explained to the students we were writing poetry, there was student whose eye lit up and immediately spun around and started scribbling on his notebook paper, extremely engaged. When he finished he handed me his poem and it was beautiful, great rhyme and rhythm and really spoke his life.  What blew me away, though, was when he read it to the group out loud. It wasn’t just a poem, but a rap that flowed gracefully off his tongue. Later when talking with the student, I learned that he is inspired by many of the professional rappers who made their way out of bad neighborhoods, similar to where he is from, to make a name for themselves. He went on to explain how hard it is to get out and when he gets back he fears for his life. His plan is to get his GED and enlist in the Army to further his education.

I couldn’t understand what the young man was saying, but what I could understand was how he felt. I could see it, feel it and, more importantly, relate to it. The young men I talked to each had a story similar to mine. I decided to share my story with two young men about how I was almost dismissed from Georgetown because of the decisions I was making. I told them how I was not doing the right thing and how I was warned that I must change my behavior if I was going to stay at the school. And I told them that I made different choices and am beginning to do the right thing. I told them that we make mistakes, but our choices thereafter are what matter most. I challenged those two young men to really think about their experiences, what they did and how they could change. I was struck by how they used the arts, especially poetry, to convey their intimate thoughts and share their compelling stories.

While interacting with the students, I became friends with one individual who had a touching story. He was 17 years old, turning 18 the next day (which would mean that he transferred to the adult facility two hours before midnight on his birthday) and he had a daughter. He told me about his daughter and how much he misses her. At first, I assumed I was more mature than he was since there was a four-year gap between us, but after speaking with him, I realized how he was forced to grow up at such a young age. He started complaining about child care, minimum wage and divorce expenses, and I felt so guilty for having a comfortable life. My heart went out to him. Spending the day inside the facility made me nervous, and when we left in the evening, I had a new sense of appreciation for fresh air. The struggles that these young men face are immense, and at this developing age, one must receive the right environment to flourish and improve.

Rai is working with coordinators at ICY to create a mentor and tutor opportunity for Georgetown students on Friday afternoons, beginning in the 2014-2014 academic year. If interested, please contact Rai at [email protected]