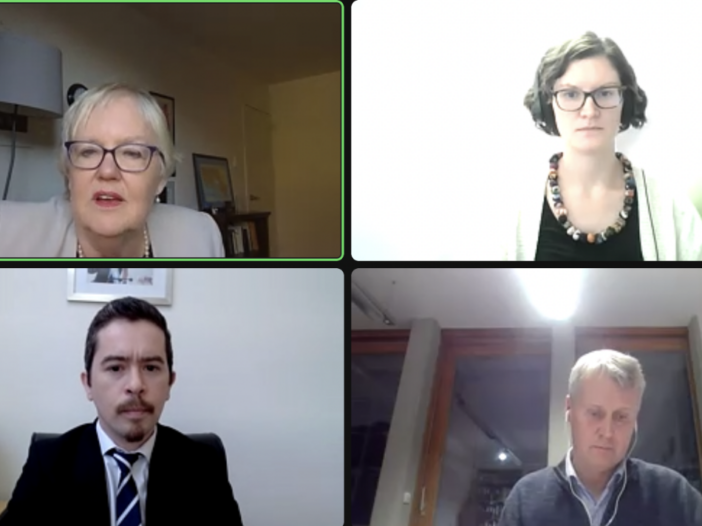 Panelists spoke to Georgetown University community members about Argentina’s humanitarian visa for people displaced by disasters and the example the program sets on the global stage.

The Institute for the Study of International Migration (ISIM) — a multidisciplinary center inside Georgetown’s School of Foreign Service — hosted the virtual event, entitled “Argentina’s Innovative Humanitarian Visa: Responding to Disaster Displacement.” Andrés Pérez Esquivel (GRD ’19) — director of international affairs at the National Directorate of Migration, a government agency responsible for managing Argentina’s migration policy — spoke at the event and shared his insider perspective on the program’s development and implementation.

Other speakers at the Nov. 7 event included Susan Fratzke (GRD ’12) — senior policy analyst at the Migration Policy Institute, a non-profit immigration think tank — and Atle Solberg, head of the secretariat at the Platform on Disaster Displacement, an international, state-led initiative to protect displaced peoples.

In May 2022, the Argentinian government created a new humanitarian visa that enabled people displaced by climate disasters from Mexico, Central America and the Caribbean to reside in the country for three years without migratory fees. Under the program, refugees are guaranteed access to housing, food and other essential support for integration such as health care services throughout this period by a civil society sponsoring organization.

The humanitarian visa program represents the latest step in Argentina’s extensive history of welcoming immigrants, according to Esquivel.

“We have a long tradition of receiving migrants as a country. Even our national constitution promotes immigration,” Esquivel said at the event. “According to our migration law, migrating is an essential, inalienable right of persons. We have equal treatment in both duties and obligations for nationals, as well as for foreigners.”

Esquivel said responding to the crisis of climate-driven displacement is a global issue that must be addressed by nations across the globe.

“Human mobility in the context of natural disasters and the adverse effects of climate change represents one of the greatest humanitarian challenges of the 21st century,” Esquivel said.

Since 2010, weather emergencies have displaced around 21.5 million people a year across the globe. According to the UN High Commissioner for Refugees, 90% of refugees come from countries deemed the most vulnerable and least ready to adapt to the effects of climate change, and the same countries host about 70% of displaced persons.

The existing international protocol of asylum systems is unprepared to efficiently handle the large-scale movement of populations displaced by climate disasters, according to Fratzke.

“Within asylum systems, in the frameworks that we’ve built to deal with the asylum application, you typically see people making individual claims, going through an individual adjudication process,” Fratzke said at the event. “This is intensive, time consuming and leads to mounting backlogs and delays.”

Fratzke said that, without specific programs developed for individuals displaced by natural disasters, these migrants often face denied entry into other countries when seeking safety.

“We know that individuals with complex needs can find it difficult to qualify for asylum,” Fratzke said. “Within the U.S. asylum system, we know that often they have complex cases that don’t clearly meet the criteria for refugee protection and that can leave them in a vulnerable position.”

The United States does not currently offer asylum to people impacted by climate disasters, and can only apply for asylum if they can show their reason for emigration is that they have faced or have reason to fear persecution due to o race, religion, nationality, political opinion or membership in a particular social group.

Current asylum systems require migrants to face many risks prior to beginning the formal immigration process, according to Fraztke.

“Asylum only kicks in once you reach a state’s territory, and it can thus require people to engage in difficult and dangerous journeys to even access the opportunity to apply for asylum,” Fratzke said. “You end up layering additional vulnerabilities on top of the things that actually drove someone to seek protection and move in the first place.”

Solberg said he expects other countries to follow in Argentina’s lead, given the increasing importance of climate emergency response.

“I’m more and more convinced that with global warming and with further environmental degradation, there is a need to prepare more for these types of movement,” Solberg said at the event. “I think we should recognize that this is an important initiative in South America that will most likely benefit an important number of people.”

Fratzke said Argentina’s humanitarian visa is an inspiring and needed step forward that will help to address global flaws in the immigration process.