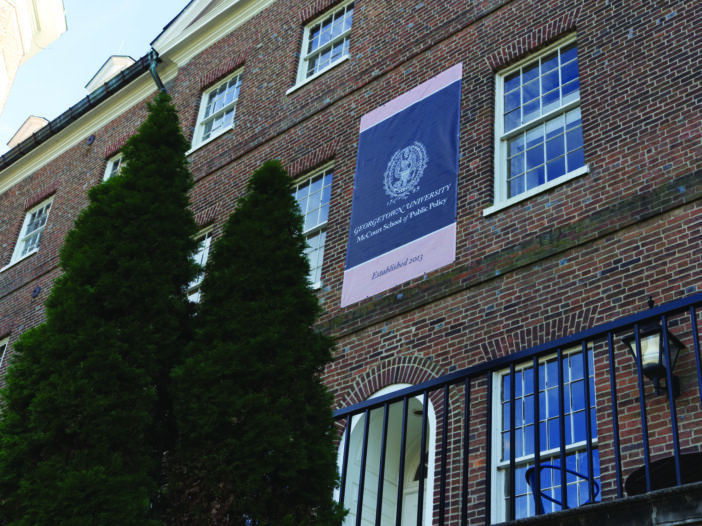 Georgetown University’s McCourt School of Public Policy joined with the Paris Institute of Political Studies (Sciences Po) in June 2021 to found the McCourt Institute, which was created to promote ethical technological innovation. The Institute builds on Georgetown’s Tech & Society initiative, an initiative between all of Georgetown’s nine schools focused on research, driving policy change and improving education around technology.

Semsar’s experience in technological development and infrastructure will allow her to make significant contributions in the field of technological ethics to the McCourt Institute, according to Frank McCourt (CAS ’75), who funded the Institute’s partnership with Sciences Po.

“We are thrilled to welcome Shéhérazade to the McCourt Institute and grateful for the expertise, enthusiasm, and leadership skills that she brings to her role as our first executive director,” McCourt wrote in a statement. “She understands that, to solve the urgent and systemic problems that today’s tech infrastructure is fueling, we need interdisciplinary thinkers working hand-in-hand with technologists to infuse ethics into technology and creating a workable plan for good digital governance.”

Semsar previously served as the founding CEO of Politico Europe, and will now further the institute’s goal of enhancing digital governance, online tools establishing authority and accountability in an organization, and technological ethics through research and engagement with policymakers and academics.

Frank McCourt’s March 2021 $100 million donation granted funding to scholarships, financial aid and research. Of these funds, $25 million were directly distributed to support the university’s initiatives with the McCourt Institute. This marks Frank McCourt’s second donation to Georgetown University; in 2013, Frank McCourt donated the same amount to found the McCourt school.

The Institute will work to improve ethics in technology and development and form a framework for the use of technology in government, according to Semsar.

“Despite technology’s many benefits, it’s clear that today’s tech structure is driving negative outcomes; this is a global problem, not just a U.S. or European problem,” Semsar wrote in the press release. “I look forward to working with great minds across countries and disciplines to create a much-needed governance framework and help put us on this better path.”

During her work at Politico, Semsar helped launch the organization’s annual Artificial Intelligence Innovation and Governance Summit, which gathers leaders from around the world to discuss AI standards. Semsar continues to serve on the Georgetown School of Foreign Service Advisory Board, and also served on Georgetown’s Board of Directors from 2013 to 2019.

The partnership with Sciences Po was made possible by McCourt’s $100 million donation to the McCourt Institute, according to McCourt School Dean Maria Cancian.

“One of the key elements of Frank McCourt’s extraordinary second $100 Million investment in the McCourt School was support for our partnership with the McCourt Institute,” Cancian wrote in an email to The Hoya.

Semsar’s extensive background in technology and digital advancement and experience with leadership at Politico will allow her to think interdisciplinarily about the institute’s work, according to Frank McCourt.

With Semsar’s appointment, the McCourt School will continue to engage with the institute’s projects and research, according to Cancian.

“The appointment of Shéhérazade Semsar-de-Boisséson as the inaugural executive director of the Institute is a great step forward,” Cancian wrote. “Semsar is a Georgetown alum and former board member, with a deep appreciation for public policy and a keen understanding of both US and international dynamics. We look forward to engaging with her in the Institute’s important work.”