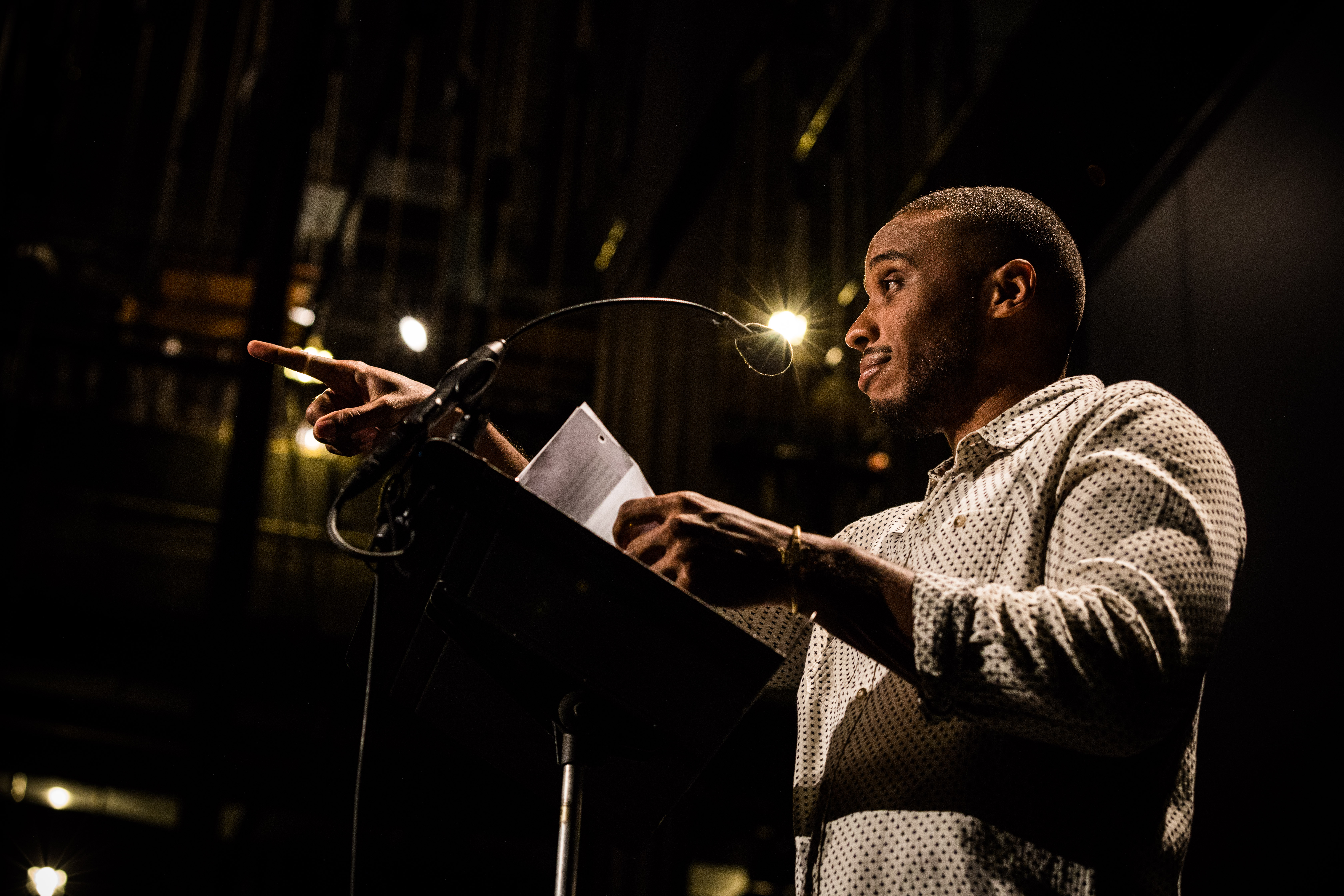 “If you’re someone who likes documentaries, podcasts, theaters, concerts, books…you’ll like our show. There’s a little bit of something for everyone.”

These were big promises from Pop Up Magazine senior story producer and co-host Anita Badejo for a show that, on the surface, presented only a person speaking at the mike, live background music and a projection screen. And yet, the 90-minute show at the Warner Theatre on Sept. 26, 2018 managed to cover topics ranging from Amazon Alexa to “thirst traps” to racial profiling, pictures of the Westminster Kennel Club Dog Show, original and inventive illustrations, and even the opportunity to smell a never-before-smelled scent. I can’t promise everyone will love each story, but failing to find one interesting or relatable aspect of the show would be almost impossible.

The show and company, Pop Up Magazine, is the brainch 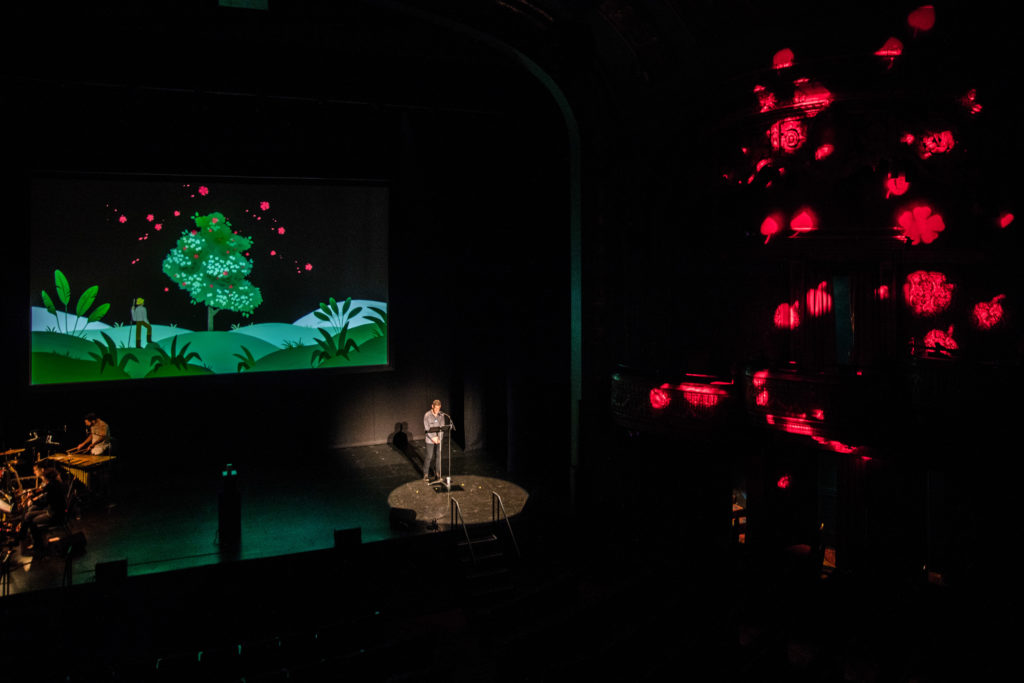 ild of Editor-in-Chief Douglas McGray, a former writer for the New Yorker and The New York Times Magazine. While working for “This American Life,” McGray was baffled that none of his radio colleagues knew any of his writing friends. If they all had the same goal—to produce great stories and narrative nonfiction—why weren’t they working together? McGray sought to bring his two worlds together.

The name “Pop Up Magazine” is both truthful and deceiving. True, the show is pop up in the sense that it prides itself on being temporary and transient—the stories change in each city visited and the shows aren’t recorded; they are gone once the night is over. The title “Magazine,” however, certainly is a falsity. The performance in no way resembles the stagnancy of a magazine. Rather, it brings together writers, radio producers, photographers, filmmakers and illustrators to create a mixed media piece unlike any other pop culture art form.

Nowadays, Pop Up produces three tours a year and has its first international performance this coming October. Behind the scenes, there are three senior story producers, production and technical managers, a photo team, an art team, and an events team. In each tour, the stories change, and a couple region-specific storytellers join the mix. The contributors are as stylistically diverse as their stories; some are lifetime veterans of journalism, while, for others, this is their first dive into storytelling. Their recent stop in Washington, D.C., featured Rebecca Skloot, author of the best-selling The Immortal Life of Henrietta Lacks, and poet/playwright Marc Bamuthi Joseph, as well as stories from artists whose words aren’t often heard, like photographers Landon Nordeman of The New York Times and Lara Shipley, whose art is displayed in the Museum of Modern Art in New York City. 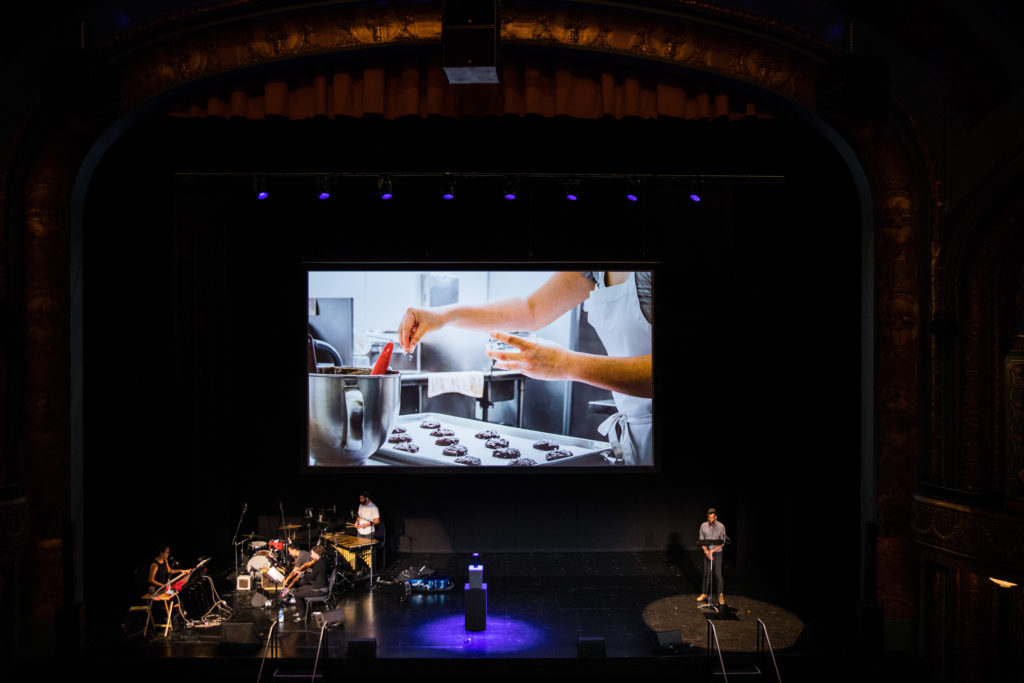 The show’s innovative form enables contributors to branch out of their usual style or topic. Skloot, who is known for her in-depth investigative science journalism, spoke about her fervent teenage determination to become an animal rights lawyer after learning her family played a big part in the fur and leather booms in fashion. Nordeman, typically behind the camera, was able to offer his perspective on the similarities between New York Fashion Week and the Westminster Kennel Club Dog Show.

The end of the D.C. of Pop-Up magazine cemented the influence of these innovative art forms. Marc Bamuthi Joseph spoke unapologetically and forcefully about his newly 16-year-old African American son, entering his “prime suspect years.” The rhythm of his words and the pleading in his voice rang on top of the art projected behind him—a mixed style of abstract and graffiti. Following that, science writer Rowan Jacobsen prompted the audience to open their program and find a small envelope inside, holding a scented paper. We were about to perform a “séance,” he explained. As members of the audience sniffed the rectangular cut outs, they learned that this odor was produced by a flower that existed thousands of years ago. Using the latest DNA technology, its essence was recreated in a lab and we were amongst the first living people to ever smell it. The audience sat there, noses in their programs, totally entranced in that moment.

Five minutes later, the show ended. Audience members walked from our seats and out of the theater with no evidence of what had just occurred—no pictures or recordings or transcripts. The fleeting nature of Pop Up is what makes it so powerful in the 21st century. The stories are for us, in that moment, only to exist in our shared experience.