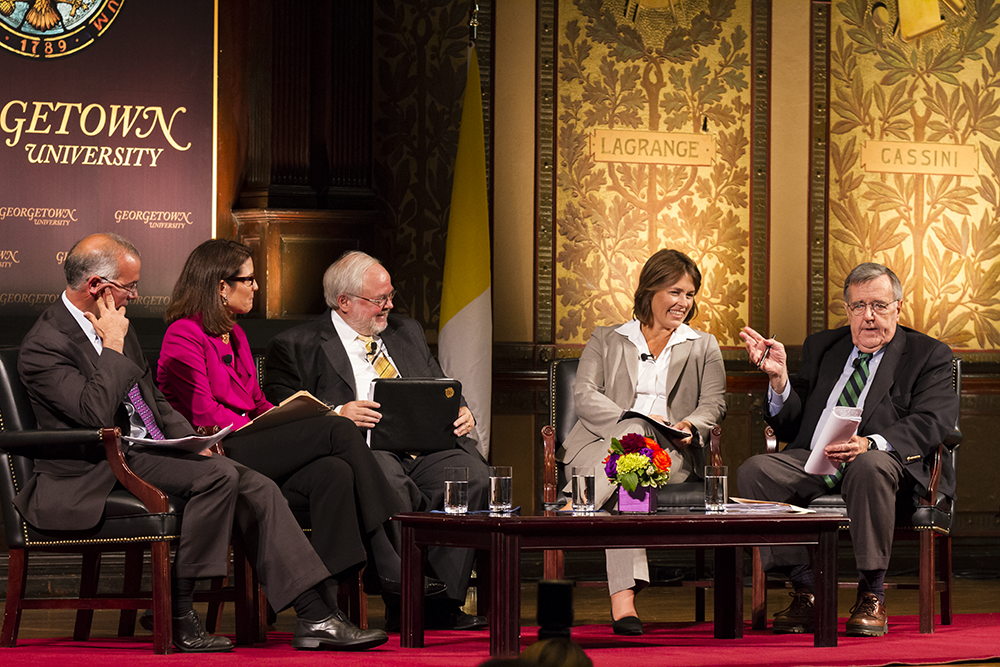 Brooks and Shields joined Kim Daniels, spokesperson for the president of the United States Conference of Catholic Bishops, and Alexia Kelley, president and CEO of Foundations and Donors Interested in Catholic Activities, for a panel discussion on Pope Francis and the future of the Catholic Church.

It was the first event for the new Initiative on Catholic Social Thought and Public Life. The initiative, led by John Carr, who served for more than 20 years as director of the Department of Justice, Peace and Human Development at the United States Conference of Catholic Bishops, aims to promote dialogue on Catholic social teaching as it relates to national and global politics.

In his opening remarks at the event, University President John J. DeGioia said the conversation was a chance to explore the impact Francis has had on the Catholic community.

“We are aware perhaps now more than ever of the resources of our faith that we can bring into public life and of the leadership of the church in bringing these values and contributions to the forefront of public dialogue,” DeGioia said.

The panelists focused on how Francis has shifted the focus of the Catholic Church’s message, and how he can craft it to appeal to audiences previously averse to Catholic teachings.

Shields said that while refreshing for Catholics worldwide, Francis’ frankness is a new challenge for Church elite.

“I think his authenticity can be felt, there’s nothing contrived about him,” Shields said. “He’s a public relations disaster. If you’re the communications staff and he’s making phone calls to atheist publisher-editors for interviews, you’re just sitting there pulling your hair out.”

Kelley praised Francis’ attempts to reach out to young Catholics.

“Young people, on a spiritual level, need something bigger than themselves, something to get them out of the bed in the morning,” Kelley said. “I think just the posture that the pope is taking and the tone he is setting, about the Church being open to the future, being close to the people, I think that kind of language is very inviting to young people.”

Brooks said he was skeptical about the effect Francis may have on the doctrinal identity of the Church.

“The Church is not only a feel-good institution about a humble guy,” Brooks said. “If you lose contact with the doctrine and the stuff that actually makes outsiders uncomfortable with a charming guy that washes people’s feet, then you’re losing something elemental to the Church.”

Conor Canning (COL ’16) agreed with the panelists about the universality of Francis’ message.

“I think the popes before Francis had a real problem in terms of being relatable to someone my age,” Canning said. “A lot of what the panel said about how the pope’s message, and his willingness to be among the people, resonated with me as a young person.”

In particular, some students appreciated the inclusion of a non-Catholic on the panel.

“I liked that David Brooks was able to provide an outside perspective on the role of the pope in the Catholic Church’s message,” Arman Ramnath (SFS ’16) said. “I think he brought up issues that wouldn’t have been brought up by others members of the panel.”