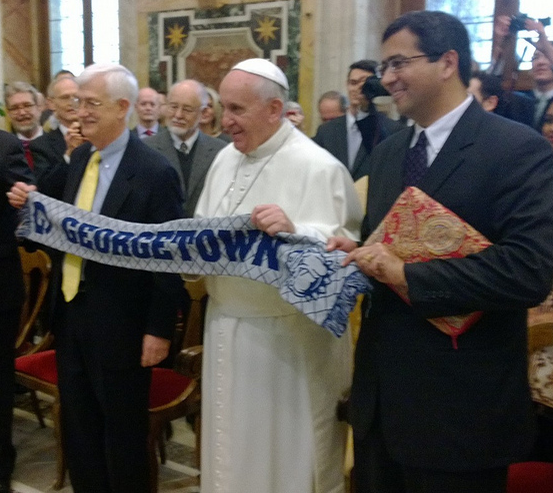 Pope Francis will visit Washington, D.C., this fall during his first official visit to the United States as pope.

Francis’ three-city trip of New York City, Philadelphia and Washington marks the first papal visit to the United States since Pope Benedict XVI came in the spring of 2008. During that trip, which was the first papal visit in over 20 years, the former pope visited New York and D.C., celebrating mass at Nationals Park and meeting with President George W. Bush.

Exact details of Pope Francis’ inaugural trip to the District are still not finalized, but he did indicate that he plans to celebrate Mass at the Basilica of the National Shrine of the Immaculate Conception, the largest Catholic church in the United States, located in the northeast quadrant of D.C. According to DCist, the pope also plans to canonize Junipero Serra during this mass in honor of his service spreading Christianity to the western United States.

More details of the visit, including the exact dates he will be in D.C., will be announced in the coming months.

At this time, Georgetown has no formal plans regarding his visit, but Georgetown officials noted their excitement for the papal visit.

“We look forward to supporting his visit to the United States and Washington, D.C., this fall,” she said.

Vice President for Mission and Ministry Fr. Kevin O’Brien, S.J., said he is excited for students to potentially see the pope in the fall.

“I am very happy for our students that the pope will be coming to Washington so that hopefully they will have a chance to see him during his public appearances,” he said.

Chancellor of the Knights of Columbus Max Rosner (SFS ’18) echoed O’Brien, saying that he plans to take advantage of the visit.

“There was some assumption that he would be coming to D.C. but it was not verified until about two weeks ago, which, living in D.C., is a great opportunity to go to a Mass by the pope, especially this pope,” he said.

He said the Knights of Columbus will plan an official trip to watch a Mass by Pope Francis when final details are announced.

“That’s definitely in the works right now, wherever he’s going to do Mass, it may be the National Basilica or the National Mall, either one, we will 100 percent be taking a van to go see him,” Rosner said.

Rosner added that the organization hopes Pope Francis will stop at Georgetown during his visit.

“We’re in the works of us writing a letter to the Vatican hoping that he can actually come to Georgetown,” he said.

Though Pope Benedict XVI did not visit Georgetown during his trip, and chose to speak at the Catholic University of America, Pope Francis has a closer tie to the Jesuit university, as he is the first pope from the Jesuit order. Originally from Argentina, Pope Francis took over the position of head of the Catholic Church in February 2013 after Pope Benedict XVI became the first pope in centuries to resign his position.

Rosner said he believes Pope Francis’ actions reflect his Jesuit values and closely align with the central values of Georgetown.

“My views are reflective of the whole world’s view that here’s a man that with the church’s recent history of being less focused on action and more with doctrine. Here’s a man that the world sees as a model Christian, and even non-Christians can look to this man as an example,” Rosner said. “Him having this Jesuit message, I actually think it even helps Georgetown more, because he’s reflective of what Georgetown’s message is, which is, let’s actually commit to action and let’s engage with the world.”