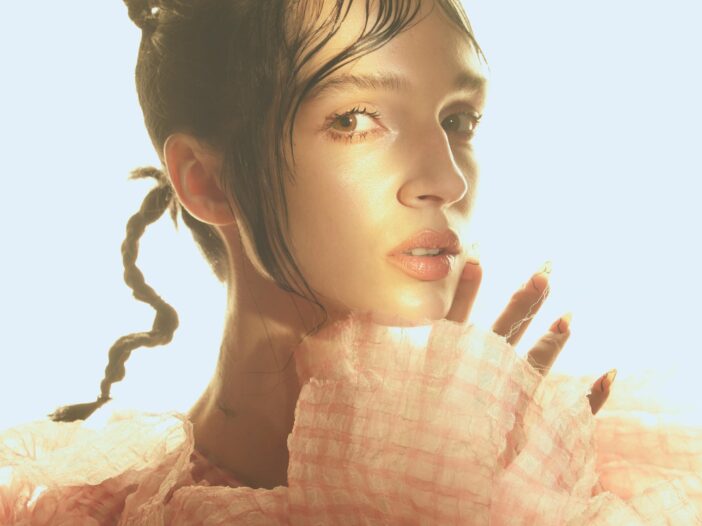 In her newest album, “Flux,” singer-songwriter Poppy (Moriah Pereira) attempts to reconcile the manufactured internet persona of her past with her current state of self-actualization, using tracks that critique societal norms by gazing inward.

Since leaving her old label, Mad Decent, in July 2019, Poppy has slowly departed from her Poppy.Computer era, which was characterized by bizarre Youtube videos and funky pop tracks. Specifically in her last Poppy.Computer era album entitled “I Disagree,” Poppy relied on a hardcore rock-metal sound to express her frustration over not having any creative control over her early career.

Mad Decent and Poppy’s ex-producer Titanic Sinclair infamously controlled Poppy’s previous production style, and tracks from “I Disagree” like “BLOODMONEY” and “Sit / Stay” unapologetically exhibit her anger toward her former label and Sinclair, as they both pushed Poppy into highly manicured roles from the beginning of her career.

While “I Disagree” centers around Poppy’s anger toward Mad Decent and her old producer, “Flux” describes what came after in Poppy’s life. In “Flux,” Poppy is in limbo, reflecting on her past and picking up the pieces of her life after separation from Mad Decent.

The title track starts off the album with a minute-long intro filled with cryptic radio warbles and electric guitar. After the first 45 seconds, drums kick in, followed by increasingly high-pitched synths that introduce Poppy’s voice. Her vocals are light and airy, contrasting with the song’s crunchy base.

In the track, Poppy sings about being objectified in her search for 2016 Internet fame. She belts out the lyrics “Cause I’ve been through it all / Chewed up and used” and “You gotta flux and flow, flow, flow / I won’t fear what I don’t know.” Poppy embraces the artistic limbo of the song, reflecting on her past and facing the unknown bravely. Although the instrumentals in the song often overpower Poppy’s voice, it effectively opens the album’s theme of punk-rock reflection.

Focusing on her intentionally edgy Poppy.Computer persona in the second track off of “Flux,” “Lessen The Damage,” Poppy deconstructs her previous identity, attempting to reckon with her lack of creative autonomy. Compared to the dynamic instrumentals of the title track, however, “Lessen The Damage” fails to captivate listeners with its slower beat.

Reminiscent of early 2000s Paramore and Avril Lavigne, Poppy’s vocals throughout the album alternate between low, throaty grunge and her characteristic light head voice, perfectly complementing the catchy guitar chords present on most of the tracks on “Flux.”

“So Mean” is an immediate album standout in showcasing this dichotomy of Poppy’s voice, capturing both her low bass range and her piercing high notes. On this track, Poppy taps into the album’s central pop-punk sound and messaging, asserting her newfound self-respect lyrically and sonically. She also uses this song to comment on how women are often praised for following orders in the music industry, but as soon as they express differing opinions, they are labeled as bitchy or mean.

Unfortunately, the latter songs on “Flux” are somewhat underwhelming compared to Poppy’s tracks earlier in her career, with a lack of sonic dynamism and repetitive lyrical messaging, exemplified by the songs “Her” and “Bloom.” “Her” is thematically identical to “Lessen The Damage,” and “Bloom” tries to embody the same ambiance as early 2000s alternative rock hits like “Supermassive Black Hole” by Muse but fails to be nearly as dynamic as the earlier rock anthem.

In the album’s final tracks, Poppy radically accepts her current self, and she describes no longer needing to chase after external validation. Poppy sings, “Take what’s mine and get my space / ’Cause I know that I will be fine / If I never find my place” in “Never Find My Place.”As the final songs progress, acoustic guitar and soft synths turn into electric guitar and drumming bases where Poppy leaves the last of her anger behind, moving forward into accepting both her Poppy.Computer era and her personal identity, Moriah Pereira.

Despite some of its underwhelming tracks, “Flux” is a long-awaited window into the person behind the viral Poppy sensation of 2016. Poppy successfully explores her transitional period from her internet personality to a new identity as a pop-rock songstress, making both new listeners and old fans excited for her future projects.