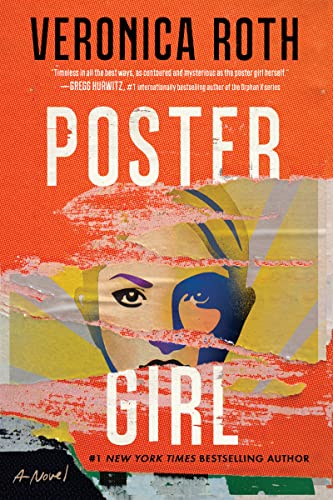 Veronica Roth achieved stardom with her bestselling debut novel “Divergent,” which took the world by storm amid the teenage dystopian craze of the early 2010s alongside titles such as “The Hunger Games” and “The Maze Runner.” While “Divergent” was defined by fast-paced action and dynamic romance, Roth’s new dystopian thriller “Poster Girl” is more reserved and mature, focusing on complex emotional and moral dilemmas.

The story centers on Sonya Kantor, a resident of a prison complex called the Aperture. During the Delegation’s reign before it was overthrown by the Triumvirate, Sonya was the face of the tyrannical regime’s propaganda posters. Sonya’s previous status as the “Poster Girl” and her family’s close ties with the Delegation resulted in her arrest and imprisonment.

The Triumvirate offers Sonya the chance to earn her freedom from the Aperture if she agrees to investigate the disappearance of Grace Ward, a girl who was stolen from her parents by Delegation authorities. The plot follows Sonya’s investigation as she uncovers the Delegation’s dark secrets and the true nature of Grace’s disappearance.

Many dystopian novels depict life under a repressive regime, and the story typically culminates with a dramatic revolution to overthrow said regime. In contrast, “Poster Girl” distinguishes itself from other dystopian novels by framing the story in the aftermath of a revolution, as society struggles to rebuild itself under an improved, albeit imperfect, government.

At first, Sonya appears to be a reserved and unmotivated protagonist, but over the course of the novel, Roth builds a complex and compelling portrait of her psyche through gradually introduced details about her past. Throughout the novel, Sonya is haunted by the death of her loved ones, the Delegation and her previous self as the “Poster Girl.” Sonya attempts to rectify her family’s past wrongs and her role in the Delegation’s oppressive regime, all while trying to navigate a world that is no longer familiar to her.

The story follows a fairly run-of-the-mill thriller plot with predictable twists and turns, but the novel’s strength is its skillful world building and thought-provoking commentary on technology and surveillance. Roth deftly weaves in world-building details throughout the story, introducing readers to concepts such as Insights and DesCoins without ever resorting to boring exposition.

Insights are ocular implants produced during the reign of the Delegation that serve as mentally controlled smartphones appearing in the user’s vision. At first glance, Insights seem like an incredible innovation that provide all the benefits of a smartphone activated with the convenience of a mere thought. In fact, Sonya thinks of her Insight as an old friend that she has missed ever since it was deactivated following the fall of the Delegation.

However, Insights were also a tool weaponized by the Delegation to monitor its citizens. At any time, the Delegation could view a person’s Insight camera feed, track their location and harvest all stored data.

Although comparable technology does not yet exist, the issues surrounding Insights reflect not only contemporary society’s reliance and addiction to smartphones but also the chilling potential for data harvesting and surveillance.

Roth also introduces the intriguing concept of DesCoin, a monetary and social currency established by the Delegation to reward good behavior and punish subversion. As a person goes about their day, they can mentally see DesCoin being added or deducted via their Insights. For example, DesCoin could be rewarded for desirable behaviors such as eating a healthy breakfast or alerting the authorities to political enemies. Likewise, DesCoin could be deducted for violations such as cursing, getting tattoos or simply not expressing enough patriotism.

Throughout the story, Sonya mentally counts the amount of DesCoin she would earn or lose as a result of her actions, even though DesCoin have long since become obsolete. The concept of the DesCoin is not only a clever way of showing how the Delegation still maintains its hegemonic grip on Sonya but also a deeper glimpse into what Sonya herself views as morally right and wrong.

The most compelling element of “Poster Girl” is Sonya’s fight to distance herself from these technologies and the oppressive regime they upheld. As a result, “Poster Girl” shines brightest when it focuses on Sonya’s transformation into a more authentic version of herself, free from the claws of the Delegation.

With skillful worldbuilding, emotional complexity and stinging social commentary, “Poster Girl” makes for a quick and compelling read — especially for those seeking a dose of early 2010’s dystopian nostalgia.