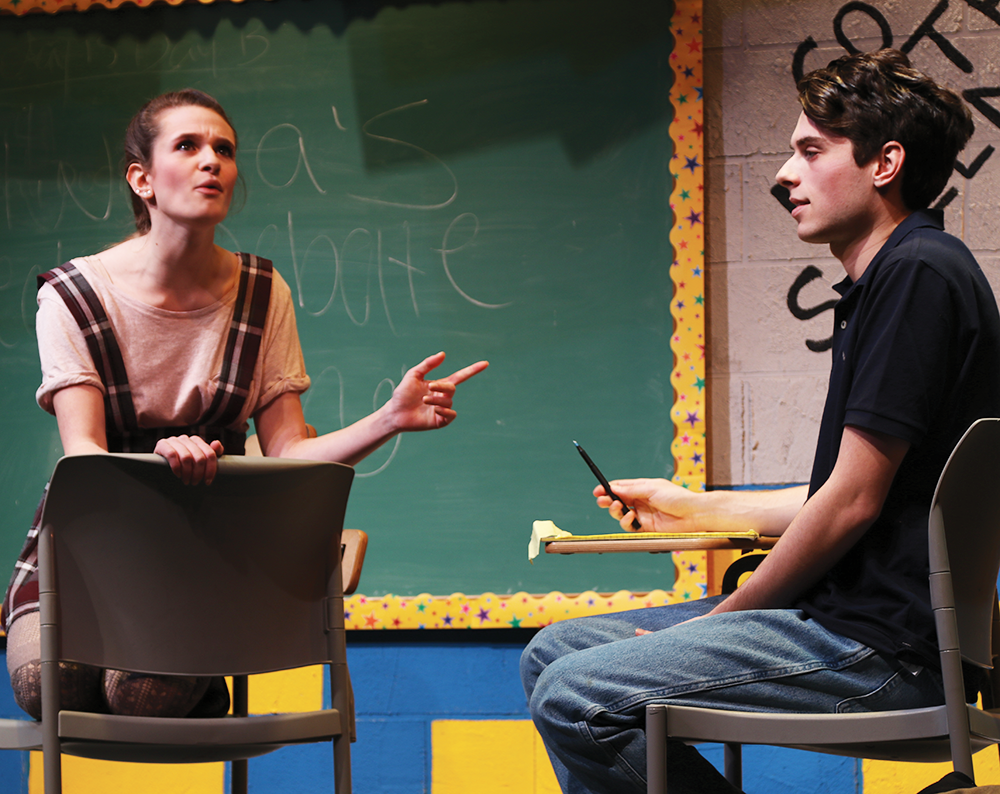 On the surface, “Speech & Debate” seems dry and cliche-ridden: Three outcast teenagers in an oppressively conservative town come together to form a debate club. Below the surface, Georgetown University’s Mask and Bauble Dramatic Society’s newest production is anything but predictable. A production co-sponsored with the theater and performance studies program, “Speech & Debate” by Stephen Karam uses humor and drama to cloak the darkness present in the lives of the show’s three protagonists: over-eager journalist Solomon, played by Nate Weiand (COL ’21); openly gay transfer student Howie, played by Ben Ulrich (SFS ’20); and friendless wannabe-diva Diwata, played by Cristin Crowley (MSB ’20).

“Speech & Debate” takes place in Salem, Ore., right after the discovery of transcripts from a gay chatroom between town’s anti-gay right-wing mayor and younger men. Solomon, who is desperate for a substantive story, tries to convince his teacher to let him write about it for the North Salem High School newspaper. After being firmly shut down, he discovers a similar scandal at his own high school that he tries to pursue for a story that brings the three characters together through the newly formed speech and debate club.

Most scenes take place during the club meetings, where the three discuss their secret but also end up revealing hidden things about themselves, forging an unlikely and often contentious friendship. Their relationship is the core of the play’s power and intrigue — not the scandal or the club’s final performance, but rather the rocky emotions intrinsic to high school and the different ways that they manifest.

“The play itself is so interesting because it’s almost 15 years old but is written with such heart and care that it still feels relevant today,” Ulrich wrote in an email to The Hoya. “More than that, it balances really over-the-top humor with more subtle laughs and some gut-wrenchingly honest moments. It’s this beautiful look into the insecurities everyone grapples with and how they motivate and shape us.”

Crowley, whose Georgetown theater experience includes four other mainstage productions beside “Speech & Debate,” also feels the heart of the play is in its bigger themes rather than its plot.

“Part of the essence of this play is the younger generation finding their freedom and breaking away from the confines the older generation has placed upon them,” Crowley wrote in an email to The Hoya.

One of the strongest parts of Mask and Bauble’s rendition of “Speech & Debate” is the chemistry between the three leads, likely due in part to their shared theater experiences: All three performed in “Footloose” last spring.

Regardless of their chemistry, each of the show’s three leads shines individually. Weiand conveyed Solomon’s high ambitions with the perfect balance of awkward and self-aware behavior. Crowley was bold and hilarious as Diwata, expertly pulling off her over-the-top character. Similarly to Weiand, her performance was powerful both in speech and in physical demonstration: Every movement she made on stage echoed Diwata’s performative nature. Ulrich as Howie served as an effective contrast to Diwata with his more sarcastic and less outlandish persona. Ulrich movingly portrayed the tension between Howie’s proclivity for defensive humor in contrast to his vulnerability.

Director Mark Camilli (COL ’19) first read “Speech & Debate” in 2016 when choosing a piece to direct for Nomadic Theatre and was immediately drawn to its raw expression of emotions and the difficulty of coming into your own sexuality. When given the opportunity to direct again, Camilli returned to the play because of its timely material.

“‘Speech & Debate’ was beyond its time politically,” Camilli wrote in an email to The Hoya. “Written in 2007, its discussion of truthful reporting in the media, sexual misconduct, and censorship feel even more relevant today.”

The production co-sponsored with the theater and performance studies program added another dimension to the production process by expanding their resources.

“As a co-production between Mask & Bauble and the Department, we experienced the benefits of having more resources and mentorship that the department offers, while still being an almost entirely student-led process,” Camilli wrote.

“Speech & Debate” is split into 12 distinct scenes with titles ranging from “extemporaneous commentary” to “original oratory,” which are speech and debate categories. The division and scene shifts make the show seem shorter than its run time and provide colorful transitions between different parts of the story, giving the audience time to recover from the intense emotions present in each scene. The incredibly impressive production value adds to the experience of the play from the comedy to the modern feel.

Earning the classification of “dramedy,” “Speech & Debate” plays with emotional weight and serves as a compelling window into the transition from youth to adulthood.

“Again and again, the play continued to morph and evolve — it became about the high school experience, online gay culture, the sometimes-stifling presence of adult power, and finding yourself within all these confined spaces,” Camilli wrote in the director’s note in the show’s program. “Yet when I read Speech & Debate today, I cannot confine its meaning to these spaces alone. I believe it is a play about connection, how we find each other when we’re growing up — and it is a play about loneliness.”