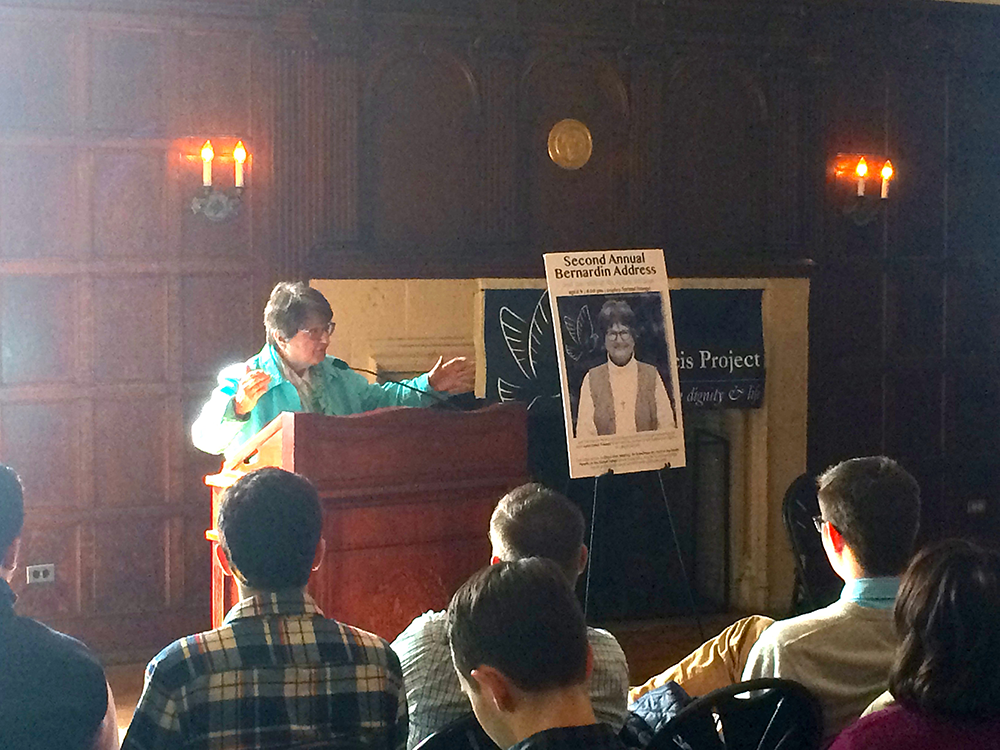 Sister Helen Prejean, one of America’s leading opponents of the death penalty, discussed the importance of grace and forgiveness in her fight to overcome a global culture of death and judgment in the annual Bernardin Address in Copley Formal Lounge on Saturday. Prejean is the author of “Dead Man Walking,” an account of her experiences with two death-row inmates.

More than 120 members of the Georgetown community attended the event, which was hosted by pro-life student groups the Francis Project and Georgetown Right to Life

Prejean, a member of the Congregation of Saint Joseph, discussed an account of her relationship with death-row inmate Patrick Sonnier, a prisoner who killed two teenagers, Loretta Ann Bourque and David LeBlanc. Prejean was Sonnier’s spiritual advisor, and stood by his side during his execution.

Prejean described meeting David’s father, Lloyd LeBlanc, for the first time two weeks before Sonnier’s execution. Instead of spiting her for defending his son’s killer, Lloyd invited Prejean to pray with him, a powerful moment for Prejean.

“It was as we prayed that I got the first glimpse of his soul. He’s the hero of ‘Dead Man Walking,’” Prejean said. “As he grew to trust me, as I kept going back, then he took me into his heart.”

Prejean said LeBlanc told her how he stopped being kind after his son’s death, and that he was only able to save himself through forgiveness.

“‘They killed our son but I’m not going to let them kill me,’” Prejean said, quoting LeBlanc. “And he began to set his face to go down the road where he knew Jesus was waiting for him.”

Prejean created a program in New Orleans called Survive, which offers counseling to the loved ones of the victims of violent crimes.

Through her work with Survive, Prejean said she began to see how considerations of race bias the system of capital punishment.

According to Prejean, eight out of every 10 people who are executed or currently on death row have been sentenced for killing a white person.

Prejean said prosecutors more easily identify with white victims and are hesitant to bring the death penalty against wealthy criminals who can afford to establish stronger legal defenses.

Prejean said the issue of the death penalty is part of a broader dialogue about the sanctity of all life.

“We need to be for life. From the unborn child just trying to be born to the person with Alzheimer’s who doesn’t even know their name: Human life has dignity, all life has dignity,” Prejean said.

Prejean said the run up to Sonnier’s execution and others like his subverted the value of human life.

“We do not yet have a Supreme Court that recognizes the mental torture that goes into taking conscious human beings with imaginations and giving them a date of death which they anticipate and die inside their minds a thousand times,” Prejean said.

Prejean said she struggled to find meaning in Prejean’s death.

“He says to me, ‘Sister, please pray God holds up my legs while I make this walk.’ Where is the dignity in this death?” Prejean said.

According to Prejean, the United States is currently among the global leaders in executions per year, alongside China, Iran and Yemen. However, support for the death penalty is at an all-time low and seven states have repealed it in the past 10 years.

Prejean said she is hopeful that the punishment will soon be abolished worldwide.

Associate Vice President for Student Affairs and Faculty Advisor to the Francis Project Jeanne Lord said preserving the dignity of all human life is entailed in Georgetown’s Catholic identity.

“I think for us as Catholics it is a very critical social justice issue. If you look at the mission and the identity of Georgetown University, we are committed to care for the whole person at all stages of life,” Lord said.

President of Georgetown Right to Life Michael Khan (COL ’18) said Prejean’s address was compelling because of her passion and appeal to personal experience.

“When she began to work with [death row inmates] and learn that they were actual humans with — as she mentioned — human emotions and faces, she really found the passion for [her work]. That’s what she shared today and I thought that was really helpful for our students,” Khan said.

Co-Director of the Cardinal O’Connor Conference on Life Spencer Crawford (SFS ’16) said he believes Georgetown students are predominantly in opposition to the death penalty.

“To see a room filled up on a Saturday afternoon to hear someone give a talk against the death penalty showed me where Georgetown stands on an issue like this,” Crawford said.