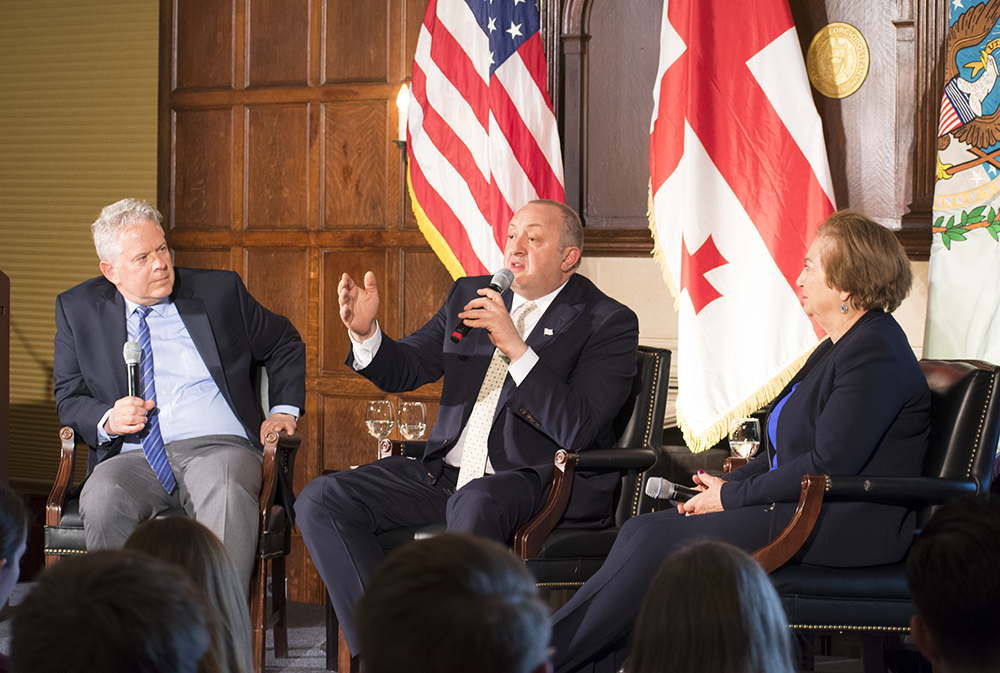 The United States and Western Europe should increase support for Georgian acceptance into the European Union and NATO, Giorgi Margvelashvili, the president of the Georgia, said in a talk hosted by the BMW Center for German and European Studies on Tuesday.

Margvelashvili said European and American support of Georgia through NATO and the EU could help protect Georgia from future Russian aggression and establish peace in Georgia, urging Europe and the United States to take a stronger stance in support of Georgia.

“When you are a superpower or when you are the winning side, by being passive, you don’t really want peace,” Margvelashvili said.

Georgia gained its independence from the Soviet Union in 1991, when the communist state collapsed. It stands out among former Soviet satellites as a country that has  experienced successful, democratic and peaceful transfers of power. However, the small republic has faced internal conflicts and Russian aggression since its inception. Separatist movements in two regions that border Russia, Abkhazia and South Ossetia, instigated fighting in 2008 between government forces and separatist groups.

Tensions between the nations increased when Russia provided support for the separatist movements and unilaterally recognized the independence of these two regions. In 2008, the tensions between Georgia, Russia and separatists culminated in a Russian invasion of Abkhazia and South Ossetia. Russia now occupies almost 20 percent of Georgian territory.

Georgia has worked to improve its relationship with the West since it gained its independence. It became a member state of the United Nations in July 1992 and deepened its economic, political and social ties to Europe through the EU-Georgia Association Council, the European Neighborhood Policy and increased trade with the EU. However, NATO deferred its decision on Georgia’s membership application in 2008, and the country has yet to become a candidate for EU membership.

Margvelashvili’s visits in Washington, D.C., this week and Brussels last week were part of an effort to increase western integration and secure European and American support for Georgia, the president said.

“The U.S. basically led the support with nations like these and gave them the opportunity of free passage to much freer areas or unions like we are trying to get to the European Union,” Margvelashvili said.

Margvelashvili outlined Georgia’s importance to Europe, citing its strategic location at the crossroads between Russia and Asia and its direct ideological opposition to Russian President Vladimir Putin’s authoritarian tendencies.

“Georgia is a clear example choice of dedication to something different than totalitarianism of Soviet Union or basically totalitarian society,” Margvelashvili said. “This is a challenge for Russia, and this is a theological benefit for the Western world. If Georgia is a successful democracy, it is mentally, conceptually, in this confrontation, it is of epic value in the choice of freedom, of the individual, of the nation, of contributing to Western way of living.”

Margvelashvili said that while Georgia will never accept Russian occupation, he awaits a more cooperative Russia to push for a removal of Russian troops.

Margvelashvili acknowledged some of the economic struggles Georgia faces in its effort to become more modern. Georgia’s GDP plummeted after the Russian invasion and is slowly rebuilding, growing at a rate of 4 percent, though almost 10 percent of the population still lives below the poverty line.

Georgia is also grappling with uneven wealth distribution, the president recognized in his speech. However, Margvelashvili expressed his confidence in Georgia’s ability to diversify and strengthen its economy.

“We are on the right track, and we are developing,” Margvelashvili said. “We have our niche in economical geopolitics. We are a transit country; now, we have to add to this niche.”