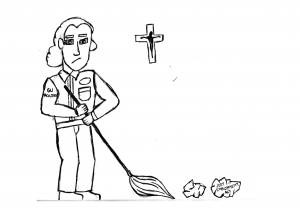 Georgetown is currently celebrating the 10-year anniversary of our Just Employment Policy, but at the same time, we must acknowledge the areas in which we continue to fail our campus workers. A group of students from the Georgetown Solidarity Committee and employees in the Facilities and Management Department attempted to meet with Vice President for Planning and Facilities Management Robin Morey and Director of Business Practices J. Callahan Watson to discuss concerns regarding facilities’ working conditions.

When our group of students entered the Planning and Facilities Management office Tuesday, Nov. 10 for our scheduled meeting, Morey confronted us and said he would not jointly meet with workers and students because the two are “different audiences.”

Morey said he was unprepared for a meeting that included workers. Students argued that because we shared the workers’ concerns, we functioned as a single audience. Morey remained uncooperative and hostile, condescendingly telling a student that she “didn’t understand” the explanation.

“This meeting was set up for about a week and we come in there and he was just disrespectful for the whole time,” one of the workers present, who did not want to be named, said. “He refused to answer any questions or give any good reason why we should not meet and that was unacceptable. He’s supposed to be responsible for the safety and the care of the students and he showed me that he will disregard that somewhere down the line. And as the workers, if he talks to a student like that, just imagine what he does to the workers.”

We wanted this meeting to be the culmination of an ongoing effort by workers and students to address violations against workers and questionable hiring practices. Students and workers have been discussing their concerns since the start of the year and brought them to managers through several letter deliveries Oct. 30. Morey’s refusal to meet with both students and workers was a disappointment but also raises the question of what he is willing to say to students that he does not want workers to hear. We refused the separate meeting in the interest of transparency, because we believe that any conversation about working conditions must involve the workers themselves. If any voice needs to be heard, it is theirs.

Our primary concern is that workers have reported severe understaffing in the facilities department. This understaffing requires workers to perform other tasks before starting their usual assignments, often without overtime pay. This also frequently requires workers to perform multi-person tasks on their own, including repairs using ladders and work involving heavy machinery. Work-related injuries, as well as exhaustion from overwork, have forced many workers to take short-term disability leave. Positions left vacant by workers on disability have not been filled, compounding the original issue.

Despite serious understaffing, the Facilities and Management Department has created several new manager positions within the last few years with salaries significantly higher than those of the workers. Even as the workforce has shrunk to a dangerous level, more managers are being hired to coordinate their declining numbers. Rather than promoting current employees for these positions, Morey hired the majority of new managers from Architect of the Capitol, the agency for which he worked before coming to Georgetown.

Why would Morey pass over employees who have been at Georgetown for decades and have strong relationships with their co-workers in favor of these outside hires?

These allegations of overwork and questionable hiring practices point to a workplace that fails to uphold our university’s Jesuit values of care, dignity and safety, as well as our commitment to act in solidarity with the worker as manifested by our Just Employment Policy. Furthermore, we hope that the administration — particularly Morey — will cooperate with both students and workers to correct the problems of understaffing and create a safer, more respectful environment for Georgetown’s facilities workers. Therefore, we ask Morey, the Facilities and Management managerial staff and the Georgetown administration as a whole to provide us with records of all new managerial hires since December 2012, records of how many workers have been employed in each of the Facilities and Management departments for the last five years, a specific plan to address the understaffing problem and a commitment to stand by the workers of Georgetown in accordance with our Jesuit values and the Just Employment Policy.