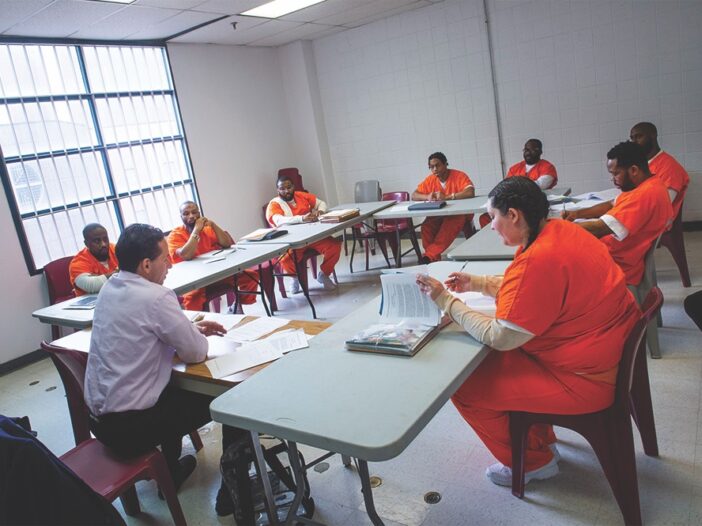 The Georgetown Prisons and Justice Initiative (PJI) released its annual report summarizing the program’s goals for the future and its achievements in the past year including the launch of a new bachelor’s degree program.

The report, which was released April 11, explored the work of the PJI in the past year, focusing on the launch of the first bachelor of liberal arts program for incarcerated people last April, the initiative’s programs for returning citizens, and PJI’s advocacy for wrongfully convicted people.

PJI Director of Communications Evelyn Rupert said the report allows PJI to reflect on its work and find ways to better serve individuals affected by the criminal justice system in the future.

“Creating an annual report allows us to stop and take stock of how far we have come and where we hope to go in the future,” Rupert wrote to The Hoya. “What I hope people take away from it is the scope of what Georgetown and PJI are doing to create opportunities for incarcerated people and returning citizens and how those opportunities have an impact on individual lives and the community at large.”

Since the launch of the new degree, which is offered to students at the Patuxent Institution, a prison in Jessup, Md., the initiative has received over 300 applicants for 25 available spots, according to the report.

Founded in 2016, PJI aims to combat the high incarceration rates in the United States by providing education opportunities to individuals in prison. The program also advocates for wrongfully convicted people and for reforms to support imprisoned individuals.

Many of PJI’s programs were revised and reduced due to the COVID-19 pandemic. The Prison Scholars Program, which enlists Georgetown faculty to teach non-credit and credit-bearing classes in the D.C. Correctional Treatment Facility and Central Detention Facility, completely canceled non-credit courses and switched all credit courses to online instruction due to the pandemic.

In 2021, 26 students completed at least one of the nine courses offered through the Prison Scholars program, according to the report.

Professor and PJI Director Marc Howard said the program is thankful for the support it receives that makes supporting those affected by the criminal justice system possible.

“The Georgetown Prisons and Justice Initiative is proud to publish our 2021 annual report, which provides an overview of our programs and celebrates our students, staff, and faculty,” Howard wrote in a statement to the Hoya.

The report, which was primarily written by Rupert and designed by Georgetown Art Director John LaRue, included the help of undergraduate students Amy Li (SFS ’22) and Jack Pedigo (SFS ’24).

Pedigo said although the report involved many moving parts PJI is proud of the way it turned out.

“Although it was quite a daunting project,” Pedigo wrote to The Hoya. “We’re super happy with how this report turned out, and we hope it has played at least a small role in shining a light on the importance of second chance hiring.”

The report contains news about PJI programs featuring multiple students and graduates of the Pivot Program, which provides formerly incarcerated individuals with professional development opportunities; the Mayor’s Office on Returning Citizen Affairs-Georgetown Paralegal Program, which trains formerly incarcerated individuals for a legal career; and the Prison Scholars Program, according to Rupert.

“Whether or not they decide to open and run a business that they end up pitching, that’s part of our program, they’re walking away with leadership skills, hard and soft skills that make them more marketable in the workforce, and we’ve seen significant progress in those who actually do launch a business,” Francis said in an interview with The Hoya.

The Pivot Program, which welcomed its fourth cohort of fellows in 2021, hopes to expand upon its programming and alumni network, according to Francis. The program is currently developing a graduate ambassadors program in an attempt to engage graduates with the fellow selection process for the next cohort, Francis said.

Rupert said PJI plans to use the report to measure the initiative’s progress and to expand the program’s offerings in the future.

“We plan to continue offering and building upon our current programs for incarcerated people and returning citizens and exploring new ways we can serve those affected by the criminal legal system,” Rupert wrote.