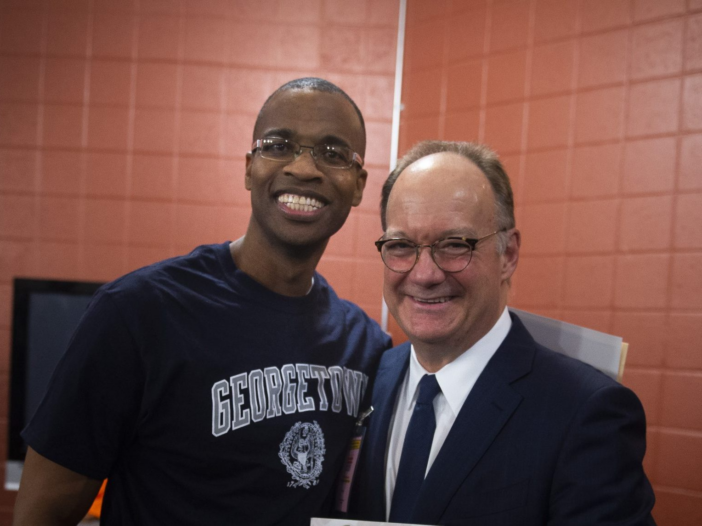 Castón, a student of the Georgetown University Prisons and Justice Initiative, a Georgetown program that offers inmates the opportunity to take credit- or non-credit-bearing classes taught by Georgetown professors, will serve on Advisory Neighborhood Commission 7F for small member district 07 after winning a June 15 special election for the seat. The district is made up primarily of the D.C. Central Detention Facility and the Harriet Tubman Women’s Shelter.

To Castón, the unique experience of being an incarcerated individual will help him to better represent and serve his constituents as an ANC commissioner.

“As an elected official my tenure sheds light on demographic that often goes unnoticed,” Castón wrote in an email to The Hoya. “I’m already experiencing expressions of elation by incarcerated residents and members of the community of the endless possibilities that come from a person who refuses to succumb to his present circumstances.”

The June 2021 special election came after a local community group, Neighbors for Justice, launched an advocacy campaign calling for a special election due to no candidate being elected to the seat during the November 2020 election cycle. The group, which seeks to support incarcerated individuals in the D.C. Central Detention Facility, also worked to recruit candidates and inform inmates of the election process.

Ultimately, over 100 inmates voted in the historic election, with Castón receiving approximately 33% of the vote. The race for ANC 7F07 was also historic, as all four candidates for the seat, including Castón, were incarcerated individuals. Prior to Castón’s election, no commissioner had been elected to serve for the small member district 07 since its creation in 2011.

Previously, in the November 2020 general election, Neighbors for Justice worked to try to fill the seat by helping Castón launch a write-in campaign, because no candidates were on the official ballot. However, Castón was disqualified by the D.C. Board of Elections because of paperwork errors. As a result, during the June 2021 special election, the group worked to ensure Castón appeared as a ballot candidate.

Castón’s election will help bring attention to the issues incarcerated individuals face and lead to a more inclusive political system, according to Marc Howard, director of the Prisons and Justice Initiative.

“I think that Joel Castón’s election serves to highlight the existence of an important community of people who have been largely forgotten and neglected in political debates,” Howard wrote in an email to The Hoya. “I hope that more elected officials will hear the voices and feel the humanity of incarcerated people.”

As of 2018, the United States had the highest incarceration rate in the world, according to the Prison Policy Initiative, a nonprofit think tank that advocates for criminal justice reform in the United States. Additionally, 48 out of 50 states currently impose voting restrictions on all incarcerated individuals, with 27 states further imposing restrictions on voting for incarcerated individuals after release.

Washington, D.C., however, does not impose post-release restrictions on felons, after the D.C. Council passed the Restore the Vote Amendment in July 2020, allowing incarcerated individuals to maintain the right to vote while serving their sentence in prison. Apart from Washington, D.C., Maine and Vermont are the only places in the United States where incarcerated individuals are able to keep their right to vote.

In his new position, Castón will receive a laptop or tablet and a designated workspace within the jail to fulfill his duties as commissioner, according to The Washington Post. Since assuming office, Castón has already begun to amplify the issues of incarcerated people, circulating a survey within the jail to garner feedback on issues his constituents want to see addressed.

Castón’s intelligence, talent and compassion will help him to serve his community in every way possible in his new elected position, according to Howard.

“He is simply a tremendous human being who is a force for good,” Howard wrote. “He will be an outstanding commissioner and representative for his constituents and I’m counting down the days until he comes home, a free man, to share his talents and positivity with the world.”

Going forward, Castón, who anticipates being released from jail in the next six months, hopes his election will encourage more incarcerated individuals to run for office in their communities whenever possible.

“Everyone has a background, it’s a common denominator that marks us all,” Castón wrote in an email to The Hoya. “When a person who has been previously knocked down and subsequently chose to get up and clean off, even an opponent can acknowledge that individual’s resiliency and give such a person a fair chance.”