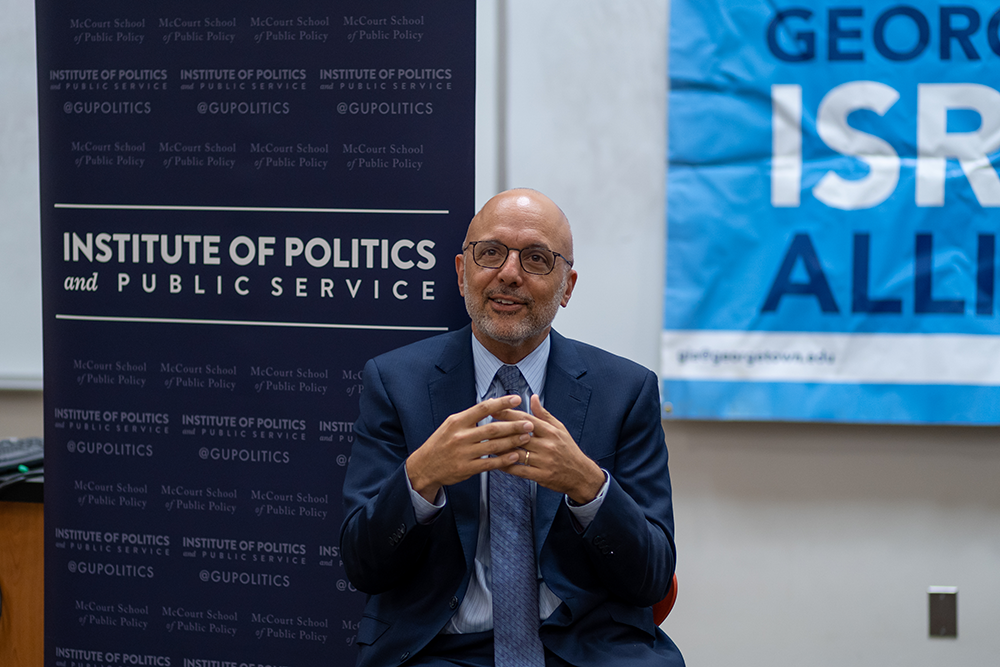 Being progressive and being pro-Israel are not mutually exclusive, but compatible, Congressman Ted Deutch (D-Fla.) said at an event Tuesday.

Deutch, the ranking member of the House Foreign Affairs Subcommittee on the Middle East and North Africa, discussed the importance of the U.S.-Israel relationship and potential solutions for the conflict between Israel and Palestine. Deutch has frequently travelled to Israel and met with Prime Minister Benjamin Netanyahu and members of the Knesset, the Israeli parliament.

The event, cohosted by the Georgetown Israel Alliance, Georgetown Institute of Politics and Public Service and Georgetown University College Democrats, included a conversation with Deutch moderated by President of GIA Ben Goodman (SFS ’20), who is also a Hoya Staff Writer.

Deutch describes himself as a “passionate supporter of Israel,” according to his official website. In September, Deutch and Congresswoman Ileana Ros-Lehtinen (R-Fla.) introduced legislation that authorizes new collaboration between the U.S. and Israel on issues related to humanitarian projects, drones and outer space.

Israel is losing the support of Democratic American voters, according to a New York Times Magazine article published March 2015. Netanyahu has turned to Deutch to find support, according to the article.

His Democratic values and progressive outlook do not conflict with his support for Israel, Deutch said.

“I am a progressive and argue that my support for Israel is not something that I need to fit with my progressive views; rather it is entirely consistent with those views,” Deutch said.

Deutch’s belief in a two-state solution, which would mean the creation of two distinct nation-states between Israel and Palestine, reinforces his progressive politics, he said.

“In order for there to be peace, we try to ensure that the facts on the ground don’t preclude the possibility of getting to a two state solution,” Deutch said.

In a news release on his official website published Sept. 12, Deutch said that the United States must support Israel in its national security endeavors.

“Israel is under constant threat from every direction. A threat to Israel, our strategic ally in a turbulent region, is also a threat to our national security,” Deutch said in a press release about the bill. “Enhancing Israel’s security is a step toward strengthening our own national security,” he said.

Members of Congress sometimes use the U.S. policy toward Israel as a political bargaining chip because the topic has turned partisan, Deutch said.

“In my own party there are some democrats who have challenges with Trump, and so it gets to be challenging if people start to equate support for Israel as something President Trump has,” Deutch said. “It’s important to always remember the relationship has always been bipartisan and that’s why it has been so successful.”

Deutch said that both sides of the political spectrum support the U.S.-Israel relationship and engage with Israel.

“Giving my colleagues the chance to hear from different political officials in Israel helps people understand when we talk about shared values, its more than just belief in equality and human rights, but it actually focuses on the free exchange of ideas,” Deutch said.

According to Deutch, debates about U.S. policy toward Israel lead to broadened bipartisan discussions.

“It’s a chance to start with the discussion of the U.S.-Israel relationship and sometimes broaden to other discussions,” Deutch said.

Deutch first got involved with the Israeli community as an undergraduate and law student at the University of Michigan and has developed a fuller appreciation for the issues that Israel encounters since becoming a Congressman, he said.

“There’s still that same passion about the country and the change I’ve seen over the past number of decades, but a more sophisticated understanding of the challenges now,” Deutch said on Tuesday.

The event was successful because it brought in an audience with varying levels of knowledge and opinions, Goodman said in an interview with The Hoya.

“As the Georgetown Israel Alliance, we run the gambit from knowing and caring a lot about Israel to not knowing much at all,” Goodman said. “The event was a big success for us as an organization in that such a variety of people were able to come and make their voices heard and hear from Congressman Deutch.”