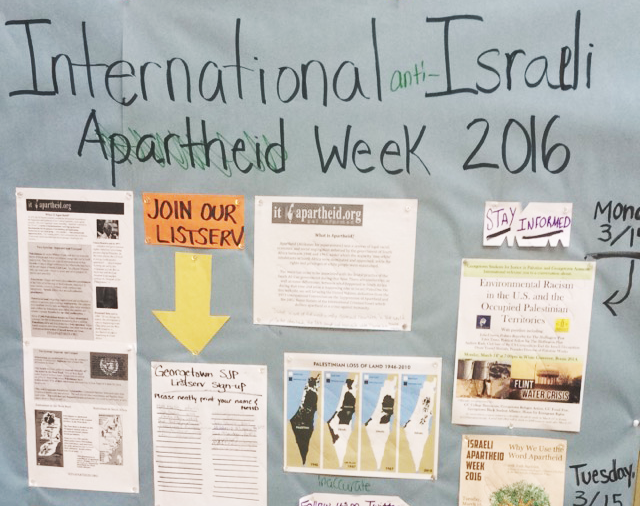 Tensions flared among student groups invested in the Israeli-Palestinian conflict after the vandalism of a makeshift wall created by Georgetown’s chapter of Students for Justice in Palestine in the Intercultural Center Galleria on March 14.

The wall was put up during Israeli Apartheid Week, which is held in over 150 universities worldwide, and aimed at symbolizing the Israeli West Bank barrier while spotlighting alleged injustices associated with the Israeli occupation of the West Bank and Gaza strip.

In addition to the wall, SJP’s programming included events such as a “Faith Washing,” which combatted the view of the conflict as a religious issue, and a discussion on why the SJP uses the term “apartheid” to characterize Israeli settlement.

The defacement included marker etchings and messages over the newspaper clippings, flyers, statistics and photographs pinned to the wall, which was taken down Sunday. The perpetrators of the vandalism have not been identified as of press time. One featured the wall’s title scribbled over and replaced with “International Anti-Israel Week 2016.” Another message invoked a quote by former Israeli Prime Minister Golda Meir, stating, “Peace will come when Arabs love their children more than they hate Jews.”

SJP Chair Eman Abdelfadeel (COL ’17) said she found the messages to be anti-Arab and verging on Islamophobic.

“We were shocked,” Abdelfadeel said. “This is a big issue — it’s bigger than any of us. We’ve done it multiple times in the past and on an annual basis, and we’ve heard from people but no one has ever gone so far as to vandalize our wall.”

“Georgetown University is a place where this kind of activity really isn’t tolerated,” Gruber said. “We’re supposed to be a place where you’re allowed to express your feelings or your thoughts without somebody coming up and causing damage to that, so hopefully this was just an isolated incident.”

“The university considers acts of hate and bias unacceptable and antithetical to its commitment to an inclusive and respectful community,” Gagliardi wrote in an email to The Hoya.

The Georgetown Israel Alliance and J Street U Georgetown, both pro-Israel organizations, have condemned the vandalism of the SJP’s wall.

GIA President Daniel Silbert (COL ’18) said he found SJP’s display one-sided and divisive but emphasized that the GIA would never respond to provocative displays with vandalism.

“If I come face-to-face with whoever did this, I’d say what you did was wrong because you defaced another campus organization’s property, which is against campus rules. It’s disrespectful, but even furthermore, it’s a horrible representation of the pro-Israel community,” Silbert said. “That’s not what we stand for, and if you are upset by what’s being said on that wall, when you respond by writing on it and defacing it, you’re just bringing more attention to it and giving their baseless claims even more attention.”

Molly Wartenberg (SFS ’16), former co-chair and current treasurer of J Street, attributed the politically charged use of the term “apartheid” as fueling the tensions that resulted in the wall’s vandalism.

“One of my main oppositions to it is that it suggests Israel is this horrible apartheid state when there is a huge difference between Israel proper and the occupied territories of the West Bank. I just think glossing over it with one word removes all nuance from the conversation and is also just very inflammatory for everyone,” Wartenberg said.

“Apartheid is an Afrikaans word meaning ‘separateness,’ and that is exactly what is in Israel-Palestine today — separateness,” Martin said. “It’s explicit, and it’s in their laws that are often very discriminatory against Palestinians and all sort of things. It doesn’t seek to equate Israel with apartheid South Africa but to highlight similarities and to then provoke conversation and critical thinking.”

In response to Israel Apartheid Week, the GIA launched a campaign calling for increased dialogue with members of the SJP. Silbert argued the SJP’s anti-normalization policy, which argues that debates between the two sides should be resisted because the process legitimizes pro-Israel positions, has stifled dialogue.

Abdelfadeel said the anti-normalization policy is rooted in the philosophical principle that pro-Israeli and pro-Palestinian positions are not morally equivalent sides.

“Israel has exercised settler-colonial policies against the Palestinians who have suffered immensely under this, and we don’t think it’s fair and it’s actually really, really absurd for anyone to suggest that an occupied people negotiate or talk or dialogue with the occupier,” Abdelfadeel said.

In light of Israel Apartheid Week and the vandalism, Martin criticized the university’s response to the vandalism, claiming its lack of formal statement is an unwelcome sign of how seriously it considers the rights of student groups.

“I anticipate and hope that the university will be more outspoken about vandalism on campus and take the rights of student groups seriously no matter what views they represent,” Martin said.