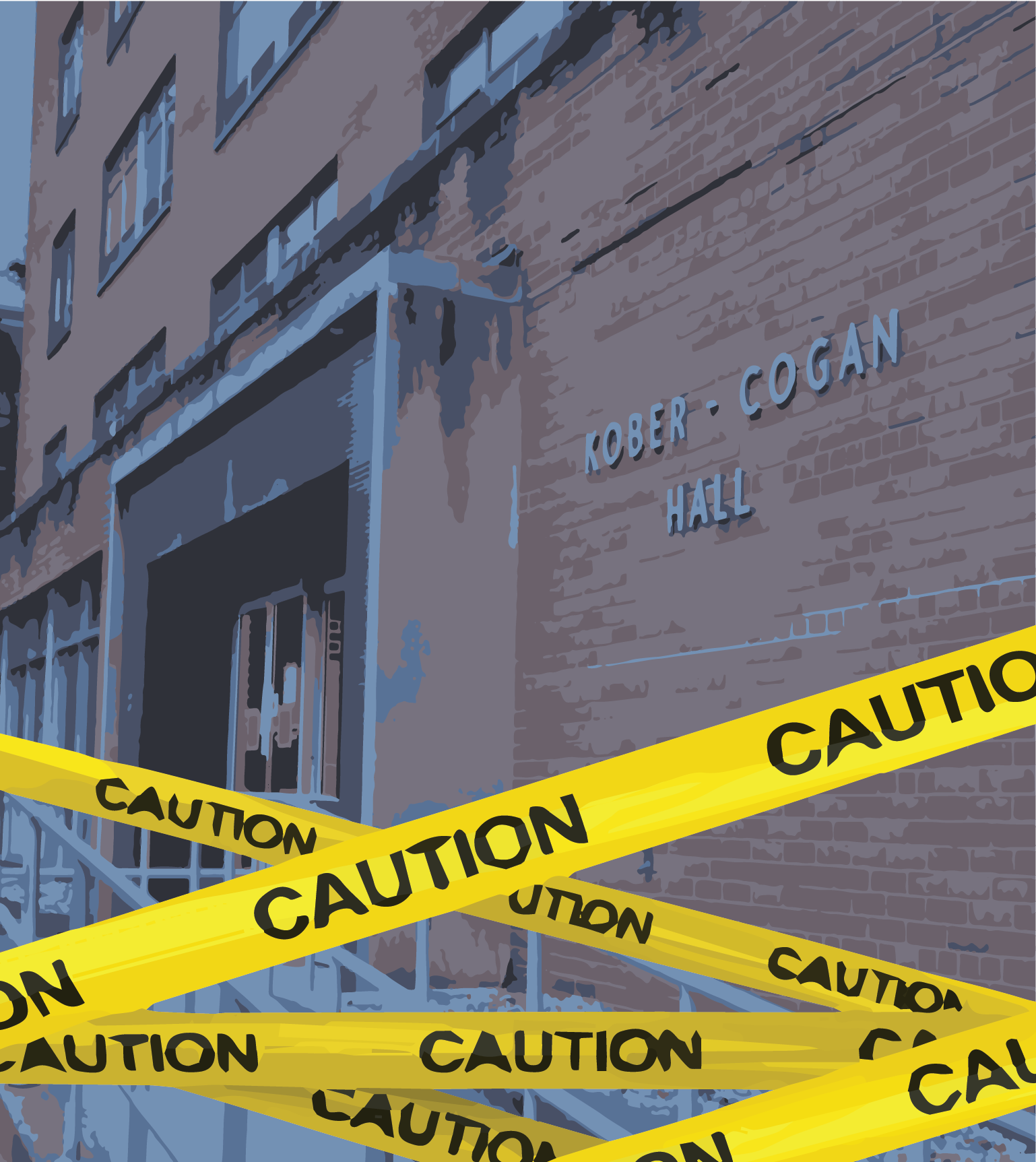 A walk through the abandoned Kober-Cogan Building reveals old books, medical kits and remnants of a hospital all covered in a film of dust, now nearly erased from memory. Furniture still sits untouched in the empty offices of the psychiatric department, while medical equipment once used to study virology grows rusty.

Debris covers the floor and many rooms are little more than decrepit shells, but charts and signage are still intact and give the impression of a once-vibrant medical community. Although the building’s doors are locked to all except maintenance workers, those daring enough to find a way in through the tunnels from the Reiss Science Building are treated to an impressive view of campus and Washington, D.C., on the building’s rooftop.

Located between the Leavey Center and the MedStar Georgetown University Hospital parking lot, Kober-Cogan occupies an important space in Georgetown University’s history of medical treatment and research. But since it was closed in 2010, the building has sat empty on Tondorf Road, awaiting its demolition.

Like many buildings at Georgetown, Kober-Cogan is insulated with asbestos, and it must therefore undergo an asbestos abatement process before it is taken down. This process is scheduled to begin January 2018, and the building’s demolition is scheduled to be complete June 2018.

After its construction in 1959, the 48,500 square foot-building served for six years as a residence hall for medical and dental students before Darnall Hall was constructed in 1965.

From 1965 on, Kober-Cogan served as a clinical building for various fields of medicine and research, including psychiatry, ophthalmology virology and speech, and had a hearing center.

After 51 years of service in these capacities, MedStar evacuated and closed off Kober-Cogan in 2010, citing health concerns related to mold potentially arising from a steam leak in the building. Kober-Cogan was used largely for clinical treatment at the time, but has been unoccupied ever since.

Perhaps the most fascinating aspect of the abandoned building is the presence of hidden underground tunnels that run under campus and provide access to Kober-Cogan. Connecting the hospital to Reiss, the main tunnel stretches for hundreds of feet and leads directly into the stairwell of Kober-Cogan.

Inside the passage are broken glass bottles, rusty tools and a disheveled, dirty mattress. The air is thick with dust, and the atmosphere is hardly pleasant, but no security concerns were cited by Robin Morey, vice president of planning and facilities management, when he was asked by The Hoya about the building.

Today, the building’s boarded-up entrances and “no-trespassing” signs have led to a fair amount of speculation about its history. Some students have shared rumors that the CIA’s MKUltra human subject experiments had a connection to Kober-Cogan.

Conducted between 1953 and 1973, the CIA’s MKUltra program conducted experiments at universities, hospitals and prisons in an attempt to develop mind control techniques that could potentially be used for interrogation and covert operations.

Many of the experiments violated standards established in the Nuremberg Code, a set of research ethics principles developed after World War II, because they involved unwilling administration of drugs, hypnosis, sensory deprivation and torture, all on unwilling patients.

The CIA took particular interest in the MGUH in the mid-1950s and provided the university with funds to build the research building that would eventually house these experiments.

However, although declassified CIA  documents related to the testing program suggest that one-sixth of the MGUH’s Gorman Building was set aside specifically for this purpose, there is no evidence in the documents that directly links Kober-Cogan to the program. Such rumors may have arisen because the building’s construction in March 1959 coincided with the start date of Georgetown’s MKUltra program.

Other rumors spread about Kober-Cogan have far less basis in fact — some say it is a meeting spot for Georgetown’s secret societies, and others even claim the building is haunted by the ghosts of its psychiatric ward.

What these rumors prove, if anything, is that most students know very little about the building, but many are intrigued by its mystery.

Despite the rumors and curiosity surrounding Kober-Cogan among the student body, campus faculty and police do not have any public plans regarding safety concerns for the building or the tunnels. MedStar staff members did not respond to requests for comment, and the Georgetown University Police Department did not respond to requests for comment regarding about safety concerns or the existence of tunnels surrounding Kober-Cogan.

The passage no longer allows access to Kober-Cogan. Although the tunnel can still be entered, the entrance to Kober-Cogan is closed by a locked metal door covered in rust, blocking the only path into the secretive building.

It is unclear precisely when or why this door was closed, putting an end to intrepid students’ exploration. Regardless, the passage could be gone soon entirely.

“These are largely utility tunnels,” wrote Morey. “[The tunnels] will be blocked off and secured.”

The space currently occupied by Kober-Cogan is planned to be used in the construction of both an extensive underground parking garage and a 477,000-square-foot medical and surgical pavilion.

Planned to house 156 patient rooms, a new Emergency Department and updated operating rooms, this pavilion is intended to improve MGUH’s capacity and quality of care.

The roof of the new building is slated also serve as a helipad, which, despite its proximity to busy locations such as St. Mary’s Hall and Darnall Hall, is designed to make less noise than the current helipad near Shaw Field.

Other plans for the $567 million project include updating current hospital facilities and creating two large green spaces, one between St. Mary’s Hall and Reservoir Road and the other between the new pavilion and Epicurean and Company. The Reservoir Road entrance to campus is set to be redesigned for better handicap accessibility. Construction is likely to have a significant impact on vehicular traffic in the area until its scheduled completion in 2021.

Kober-Cogan presents an eyesore for some and a source of intrigue for others, but it will soon reclaim its place as part of Georgetown’s history. The building’s demolition is set to make way for a more capable hospital and a more accessible campus, but with it disappears mysterious rumors and late-night adventures in its abandoned rooms. For future Hoyas, stories of students exploring the crumbling tunnels running deep beneath campus will seem purely the stuff of myths.

Correction: This article previously misidentified Morey’s gender pronoun. It has been updated to correctly reference him.