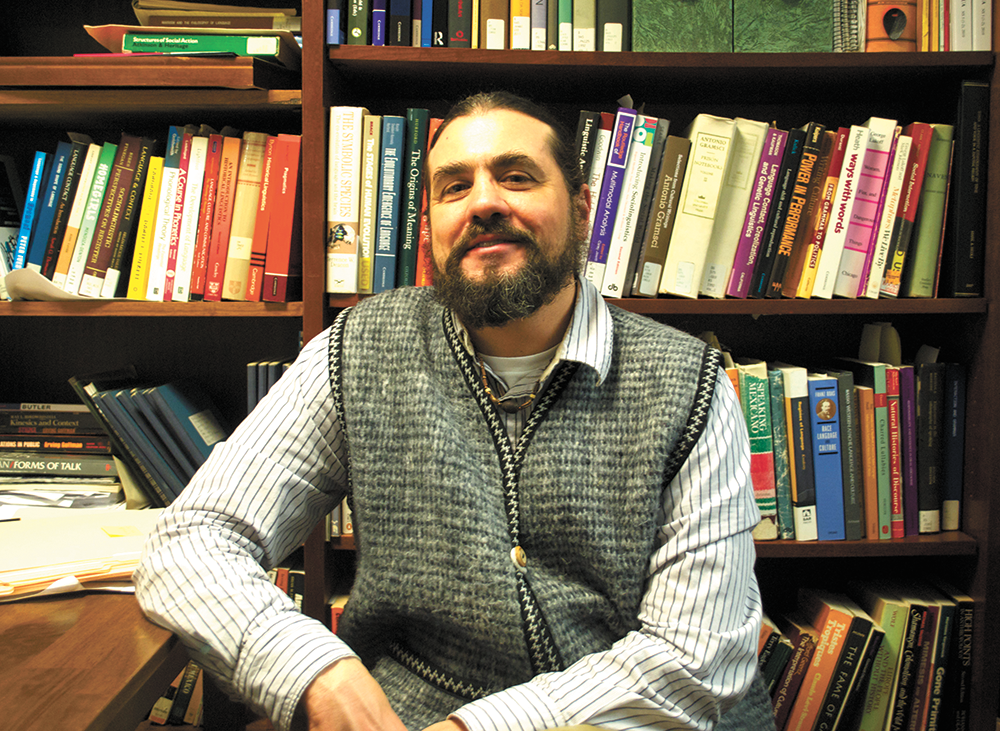 Each Tuesday afternoon in Poulton Hall, professor Mark Sicoli gathers with a student research team to analyze videos of people speaking Lachixío, of the West Zapotec language family that is spoken in Oaxaca, Mexico.

With the rising prominence of Spanish, only approximately 3,000 people in the world currently speak Lachixío; in 2000, children in only four towns learned the language. Lachixío is considered an endangered language, and if current trends continue, the Linguistic Society of America expects it to become extinct within the next century.

Sicoli’s group, named Multimodal Interaction in Meso America, analyzes the videos in order to understand everyday interactions, such as eating dinner or entertaining visitors. The videos, which total over 40 hours, were gathered during the summers of 2008 and 2009. Known as multimodal analysis, this method relies on the theory that language is more than simply spoken words; it is also gestures and other behaviors.

“These are not setups. This is just what people would be doing if they were just going about their normal stuff,” Sicoli said. “Through all this work, we get the flavor of the language — not just the words and rules but also the flavor of how it gets used in social life — which are, in a sense, another level of rules for the use of language.”

According to Sicoli, interactional structures based on specific actions, such as requests or offers, can be similar between languages, even if the spoken language is different.

Sicoli, who also speaks Lachixío, initially learned about the language while completing his master’s degree at the University of Pittsburgh when a professor invited him to help with another language documentation project in the area.

“I found the people fascinating and the languages very fascinating to me,” Sicoli said. “I wanted to work on a tonal language, like Cantonese and Mandarin and most of the other languages of the world.”

Although several factors contribute to a language’s endangerment and possible extinction, Sicoli noted the strong influence of cultural ideologies have a major influence, particularly for Zapotec languages.

“Spanish became everybody’s second language starting in the ’50s and ’60s there, and with nationalism, for instance, comes a strong ideology for creating signs of homogeneity among the population,” Sicoli said. “Language is an easy symbol for people to grab on to and say, if we all speak the same language, we’re all the same people.”

To revitalize the indigenous Zapotec-Chatino language family, which includes Lachixío and approximately 25 other languages, Sicoli has launched two projects that are funded by the National Science Foundation and the National Endowment for the Humanities.

Part of the Documenting Endangered Languages Program is an online archive of 2,500 phrases — such as verbs or numbers — from each of the 103 Mexican towns that speaks a Zapotec-Chatino language, readily available for linguists and students to utilize for revitalization purposes. According to Sicoli, the archive will be completed later this year.

But while Sicoli recognized the importance of documenting languages, he said that it did not embody the true nature of languages.

“It doesn’t capture language in its natural ecology,” Sicoli said.

Therefore, based on the research collected with his student research group, Sicoli aims to release a book called “Saying and Doing in Lachixío Zapotec” this year. To finalize his research, he will return to Oaxaca in July.

“People have tended to focus on documenting vocabularies,” Sicoli said. “Actually looking at language in use and how people are using that to coordinate their activities in everyday life has been mostly absent, but it’s a growing area. It’s a cutting-edge area of linguistics.”

Sicoli added that this shift toward multimodal analysis is a field-wide trend, encouraged by the NSF and the NEH.

“[They] are trying to encourage this type of documentation of language rather than the dictionary documentation as a bag of words and a bag of rules,” Sicoli said. “This is really the future of documentation — how language is used to do all of the things that we do as people — because it’s such a part of everything we do.”

Professor Deborah Tannen, a sociolinguist, stressed the importance of Sicoli’s methods and technology for the field of linguistics.

The students in Sicoli’s research group agreed and said they were excited to work with Sicoli on the innovative analysis methods.

“I really like Dr. Sicoli’s approach — his analytical approach, his theoretical approach,” Amelia Tseng (GRD ’14), who is a Ph.D. candidate, said. “He’s a very well-rounded scholar who works on a number of things in impressive breadth and depth, so to be able to work with someone like that is very good for me in terms of learning how to do various things.”

By learning and using Sicoli’s methods, students are also able to learn and adapt to the specialized software the research group uses.

“I enjoy getting experience with the software, which has been really helpful for me in a lot of the projects that I’ve done,” said April-Michelle Thomas (COL ’15), who is also using Sicoli’s software for her senior anthropology thesis.

In addition to his documentation work, Sicoli also raises awareness in indigenous communities of the endangered nature of their language.

“There’s many a documented case where languages go extinct without people really recognizing they’re coming into jeopardy until it’s too late,” Sicoli said. “It’s this issue of the human right to have a means of communication that is culturally appropriate for your desires, and that’s a nice place to kind of be able to contribute with the work of a linguist to be able to contribute to that empowerment.”

Nevertheless, Sicoli emphasized that he does not like to think of himself as “saving” the languages.

“I’ve done a lot of work to train native speakers of different Zapotec languages to do linguistics and to develop materials for their own town, and this where I really see there’s a service side to the work which helps facilitate people to do language maintenance within their own community, and that piece has to be there in order for anything you do to really work,” Sicoli said. “I like to put the agency in the hands of the people.”