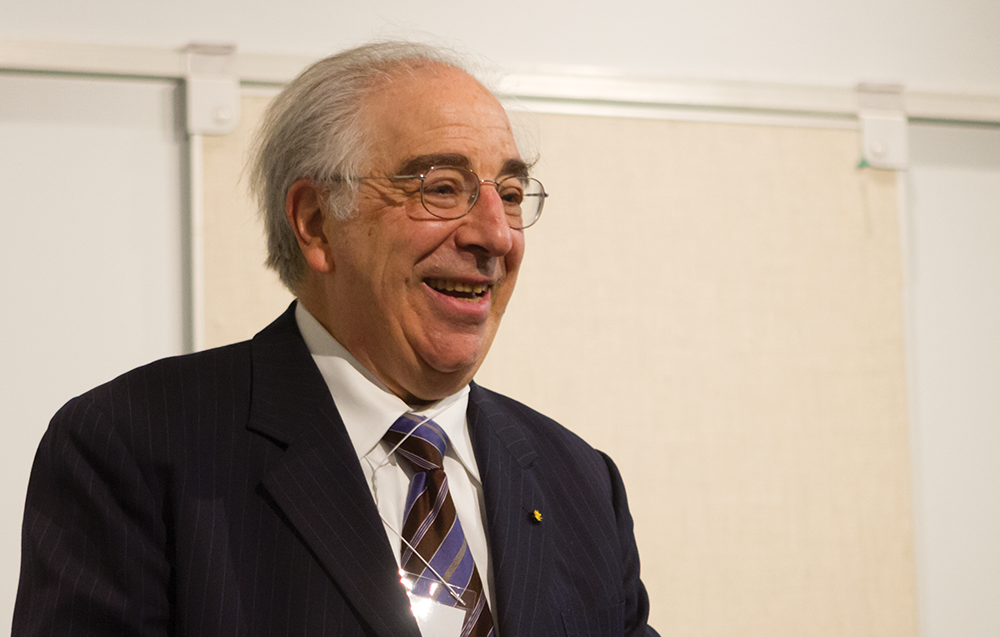 The School of Foreign Service pioneered the major of science, technology and international affairs, with one man, Charles Weiss, instrumental in the program’s development.

After shepherding over 700 students through the STIA program, Weiss will retire at the end of this school year, after a 17-year tenure as a distinguished professor and former STIA director.

After his time at Harvard, Weiss served as a science and technology adviser to the World Bank from 1971 to 1986. He also worked at a variety of universities, including Princeton University, the University of Pennsylvania, the University of California at Berkeley and Johns Hopkins University.

Scholarly publications include a co-authored book about revolutionizing energy technology, in addition to numerous works in academic journals and conferences.

For the past 17 years, Weiss has shaped the STIA program at Georgetown. According to Weiss, crafting the program involved a lot of hard work, preparation, and most of all, education.

“The STIA program is unique. I found that I’m not aware of another undergraduate program with the international focus and the breadth of coverage of STIA,” Weiss said. “In order to put this together, I had to learn a great deal. My experience was broad with the World Bank and other courses I had been teaching, but still I had never undertaken anything quite that broad.”

During his time developing the program, Weiss created the STIA gateway course, “Science & Technology in the Global Arena,” which he has taught since.

He also provided a strong foundation for the program to grow, according to colleague Timothy Beach, the current STIA director.

“Great people retire, and we need to have appropriate symbolism for these events for the institutional history to carry on and solidify around their creations and accomplishments,” Beach wrote in an email. “Chuck Weiss will be missed by all, but we worked to put in place truly exceptional new people who will build from his strong foundation.  This was also part of his accomplishment, namely to help develop a sustainable program that would keep the SFS and [Georgetown] strong.”

Robyn Liska (SFS ’08), a former student of Weiss and a STIA major, said that the professor was intrinsic to the success and legacy of the program.

“I think that the School of Foreign Service really owes a debt to him because he was pivotal to the creation of the STIA program such as it is today. … Without him to start it, I think the program would have looked very different,” Liska said. “Whether it would be here at all, I’m not sure. So I think that Georgetown was really lucky to have him and all of the generations of students that took his classes and learned from him will take his lessons forward.”

In addition to developing the STIA program, Weiss fostered relationships with his students and challenged them to improve and grow. Kevin Meurer (SFS ’16) helped Weiss with research projects this year, and said that Weiss is both brilliant and friendly in a classroom setting.

“When you’re working with professor Weiss, you’re immediately conscious of his unique presence,” Meurer said. “He carefully listens to everything you say and oftentimes will point out things you’d never have thought of. You’re always conscious of his extensive experience and knowledge, yet he’s easy to talk to and quick to share a humorous story. In that way, he’s a great teacher.”

According to Liska, Weiss’ classes were extremely well developed and also very challenging.

“He was a great professor, one of definitely the most challenging I had during my time in the SFS,” Liska said. “The classes he created were the most comprehensive and integrated courses I have ever taken because they covered the breadth of science and technology and innovation and discovery all the way through application in 10 or 15 different fields.”

Through Weiss’ breadth of knowledge, students connected to the themes of the STIA curriculum.

“He somehow — I’m still not sure how to this day he did it — gave us the theoretical foundation of science and technology, of discovery and innovation and somehow connected themes through all of the different, diverse subjects,” Liska said.

In a speech at his retirement symposium, Weiss said that he is proud of the students that he has taught over the years.

“Next year we ‘old bulls’ will be gone and a wonderful new generation of young faculty will take over the STIA program that we have built,” Weiss said. “I thank our marvelous undergraduate students for educating me, for keeping me up to date and for sharing with me their vision of the future.”

Weiss’ experience in the field made him a resource to his colleagues and students. Beach said that his years with Weiss have taught him to think broadly and comprehensively.

“I have learned to question, dig deep, never settle for superficial answers in anything, to appreciate a broader field of science and technology then I had ever imagined: the importance of innovation, the private sector, the depth of the adjunct communities around GU, reinforcement of ethics and community involvement and many Yiddish phrases both apt and hilarious that will always leave eddies in the rivers of my memory,” Beach wrote.

Other than his role as a teacher, director and colleague, Weiss served as a role model for many students.

“Professor Weiss has given me a model to work toward,” Meurer said.“He has demonstrated that a strong, kind character and undeniable success are not mutually exclusive.  Every day, Dr. Weiss proves himself to be a great man, not just for his accomplishments, but also for his character.”

The event ended with a keynote speech by Robert Socolow, a Princeton University professor and colleague and friend of Weiss. Socolow spoke about his long history and friendship with Weiss as well as the importance of environmentalism for the future of the Earth.

According to Weiss, the symposium will remain one of his favorite memories from his time at Georgetown.

“The whole afternoon and evening were very stimulating and very gratifying,” Weiss said. “What was especially gratifying was the alumni panel that brought back graduates of the STIA program because they had understood what we had tried to do.”

“Any time a student comes back and says, ‘What I, as a student, learned in your class, in your classes and in your program has given me direction and has given me insights that have been valuable and have helped me find myself and orient my life,’ then that’s what a professor lives for,” Weiss said. “That’s why you go into the profession. That’s what you’re trying to help people. You’re trying to educate and orient them.”

Since the program’s inception, STIA has graduated 700 to 800 alumni, all of whom Weiss guided over nearly the past two decades.

Weiss looks forward to spending more time with his family and pursuing academic goals throughout his retirement. He is currently in the process of drafting a book on innovation in legacy sectors.

“I have a couple of books I’m trying to finish,” Weiss said.“And it’s nice to see my grandchildren some. … I’ve got some hobbies I’d like to pursue, and I have some languages I want to learn. When I learn some Arabic, that will be fun.”