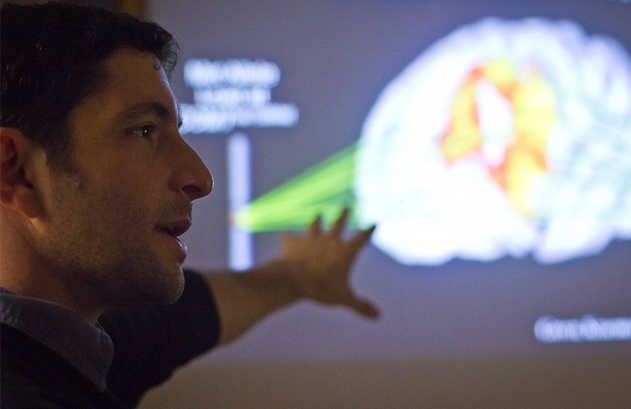 Electrical stimulation to the front of the brain’s left hemisphere may spark an increased capacity for creative thinking, according to new findings by Georgetown researchers Adam Green and Peter Turkeltaub published on April 13 in the science journal, Cerebral Cortex.

During the year-long research project, the team hitched transcranial direct current stimulation, or tDCS, electrodes to the heads of 31 participants while word associations that urged subjects to think more creatively. One group was subjected to electronic simulation to their frontal polar cortex — a hotbed of neural cells wired for integrating and connecting information associated with creativity. Contrastingly, a control group received the same experience without any actual stimulation.

Participants were then instructed to take two tests: a verb generation task which prompted them to form creative associations between words and another which facilitated creating analogical connections between different concepts.

“My lab is very interested in creative intelligence and the nexus between creativity and reasoning, and one of the things we have been studying a lot of is how people make connections between things that don’t seem the same,” Green said. “That’s because a lot of creative thinkers, from Kepler to Einstein to Steve Jobs, and a lot more have described creative insights as really being the product of connections made between things other people didn’t put together.”

The creativity of these connections between words were quantified through a computerized algorithm measuring the semantic distance between words, which compiles massive volumes of text and assesses words based on the contexts where they appear and the phrases they are associated with.

“We’re looking at the interaction between this exogenous electrical stimulation and the conscious and purposeful modulation of creativity and that’s different than what has been done before,” Turkeltaub said. “We’re looking at useful creativity, while a lot of other studies like this one have shown that stimulation produces responses that are farther afield than what you would have expected, and here we show that specifically the stimulation increases people’s ability to find meaningful relationships rather than any relationship regardless of whether it’s meaningful.”

Though Turkeltaub stressed the need for further studies to replicate the results before any definitive conclusions can be made, he said he hopes further research can be used to assist the cognitively impaired, particularly stroke survivors.

“A lot of my research has been in people that have had left hemisphere strokes and who have problems with language called aphasia, and one of the main things they need to do to communicate is find alternate ways of seeing things, and that’s a creative process in finding analogies in what they can say and what they want to say,” Turkeltaub said.

Turkeltaub’s former lab manager Kate Spiegel (COL ’14), who conducted the experiments as her senior thesis at Georgetown, said the study probes into larger questions about brain structure’s effect on personality and character.

“I think this study made me realize how our brain dictates how we are,” Spiegel said. “If you think about it, anything that we do, even if it doesn’t involve zapping your brain with tDCS (transcranial direct-current stimulation), but things like taking medication for ADHD or having a glass of wine changes the chemistry of your brain and how you go about making decision in your everyday life, and I think that relations between brain, mind and person is something I really took away from this study.”

Psychology major Elana Richmond (COL ’16) said learning about this study has caused her to reexamine how she approaches creativity.

“The scariest thing about studying science of the human brain, the more you realize you don’t have control over who you are necessarily,” Richmond said. “You’d like to think your personality and your capacities and your idea of creativity is something that’s yours, that’s who you are, but when you really look into it, it’s only the chemical structure of your brain.”

Nevertheless, Green cautioned against attempting to reproduce the lab experiments in their own homes with narcotics or homemade tDCS devices.

“This is a new area and has become a hot area in cognitive neuroscience, and as is always the case when something is new, it’s important to be careful how we interpret the data we get, and it’s very important to be very cautious against inspiring any outside-the-lab use,” Green said.