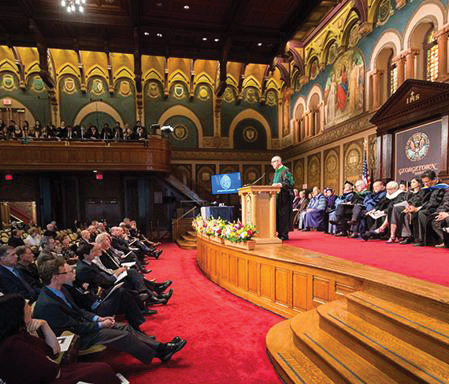 Georgetown University recognized a professor of oncology and pharmacology who is working to cure cancer, a law school professor whose research is shaping the decision-making of the U.S. Supreme Court and another who is changing how the process of aging is addressed with the President’s Award for Distinguished Scholar-Teachers at the annual 2016 Fall Faculty Convocation on Oct. 21.

Professor of oncology and pharmacology Anton Wellstein, professor of law Donald Langevoort and professor of psychology Darlene Howard received this year’s awards, which recognize excellence in both research and teaching at Georgetown.

Provost Robert Groves said the medal recognizes those who set a standard of academic excellence in both research and in teaching.

“This medal was designed to recognize those faculty among us who excel both in research and teaching effectiveness. They, therefore, teach us every day that these two sides of an academic are not in conflict but can be jointly achieved,” Groves said.

University President John J. DeGioia said in his address to the convocation in Gaston Hall that Howard was awarded for her passion both in and out of the classroom.

“All of you who know her know that she’s a generous mentor, known for her ability to bring out an enthusiasm in her students, a passion for the field and a dedication to the rigors of conducting scientific studies that sustains them into their future,” DeGioia said.

Howard, whose work focuses on how cognitive and neural systems decline and progress during aging, said she came to Georgetown because she wanted to be at a place where both aspects of academia are valued.

“There are a lot of places you can go where you’re almost punished for caring about your teaching because the pressure of researching and publishing is too heavy,” Howard said. “I fell in love with teaching as a graduate student, and that’s the reason I came to Georgetown.”

Howard not only stands out for her research abilities, but for her teaching skills, according to one of Howard’s students Shea Crowley (COL ’17).

“Professor Howard really exemplified what a professor should be, which is a knowledgeable lecturer and an expert in his or her field. Howard is also an interesting person who cares about her students,” Crowley said.

Wellstein said good college professors are those who balance teaching and research.

“There’s no conflict between teaching and research; they go hand in hand,” Wellstein said. “I can use what I’m researching in teaching and what I’m teaching in my research. They feed off of each other.”

Wellstein’s work has contributed not only to the Georgetown community but to the broader field of oncology, pharmacology and cancer research, according to DeGioia.

“Few have done more to advance this next generation of research and researchers in the critical field of oncology than Anton. And we’re all better here at Georgetown because of his presence,” DeGioia said.
Langevoort, whose work focuses on contracts and securities regulation, said a lot of his research is motivated and enhanced by the courses he teaches in the Georgetown University Law Center.

“I’ve gotten some of my best ideas for what I write about by standing up in front of a classroom and having a discussion with students,” Langevoort said. “They ask great questions and if you listen carefully, you realize that there are different ways of thinking about these topics. Plus, I love talking about the subjects that I study.”

DeGioia described how the influence of Langevoort’s research has reached as far as the Supreme Court.

“His influential scholarship has been cited in opinions issued by justices of the Supreme Court and continues to shape discussions of insider trading and securities litigation reform,” DeGioia said. “He provides a model for multidisciplinary scholarship bringing together law, psychology and finance to address important issues in governance and business practices.”

All three professors said they were extremely surprised to receive the award, yet were humbled by the recognition.

“As far as we could tell, there aren’t other major universities that have an award like this,” Langevoort said. “There certainly are awards that recognize institutions’ best scholars, and most universities have some kind of teaching merit recognition, but Georgetown bolsters the point that research and teaching are equally important.”