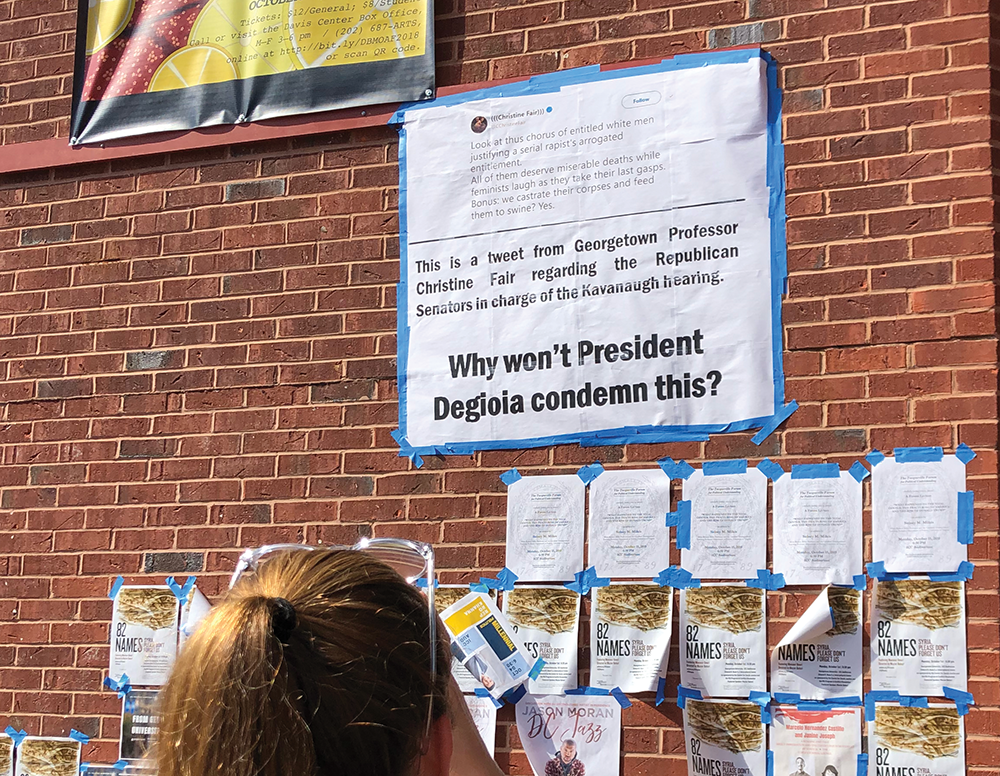 Georgetown University President John J. DeGioia condemned the use of “violent imagery” Tuesday after professor Christine Fair was criticized for a Saturday tweet that called for violence against Republican senators.

The tweet has come under fire from alumni, students and conservative-leaning media. DeGioia said the university would follow established procedures if comments made by faculty are found to affect student learning.

“Look at [this] chorus of entitled white men justifying a serial rapist’s arrogated entitlement. All of them deserve miserable deaths while feminists laugh as they take their last gasps,” Fair wrote. “Bonus: we castrate their corpses and feed them to swine? Yes.”

Fair clarified in a subsequent tweet Tuesday that she does not actually wish to see violence against Republican senators and that she intended to instill discomfort in readers.

“I do NOT and NEVER have condoned violence. My tweet, as I have explained, was an attempt to make YOU as UNCOMFORTABLE as I am using the language of the abuse I receive by the hundreds,” Fair wrote.

DeGioia responded to Fair’s tweets supporting university officials’ right to freedom of speech in a statement released Tuesday. Fair remains employed by the university, Fair wrote in an email to The Hoya.

“We protect the right of our community members to exercise their freedom of expression. This does not mean the University endorses the content of their expression,” DeGioia wrote. “We can and do strongly condemn the use of violent imagery, profanity, and insensitive labeling of individuals based on gender, ethnicity or political affiliation in any form of discourse. Such expressions go against our values.”

Fair says she does not expect any significant changes in her professional life following the attention her tweet has received.

“My dean knows how to reach me,” Fair told The Washington Post on Tuesday. “This morning I’ve been prepping for classes. I’ve not checked my email because most of it is rubbish.”

The media coverage has not affected her classes or student interactions, Fair said. However, she said she has received a large volume of hate mail and two active death threats which she has reported to the Metropolitan Police Department.

“I’m still doing what needs to be done!” Fair wrote.

Fair’s tweet quickly gained attention, and Campus Reform, a conservative news outlet that aims to combat a liberal bias it alleges exists on U.S. university campuses, requested a comment from Fair on her tweet.

Fair criticized the effects of conservative media reporting in her post, underlining the threats she has received.

“For one thing, you intend to outrage CON-servatives (especially those pissed off men who hate women) and thus motivate them to harass me and send me threatening missives,” Fair wrote in her blog post. “If you don’t intend to do this, then you’re ludicrously obtuse because this is the inevitable consequence of your ‘reportage.’ Would you like to see some of the violent missives I get as a result this ‘news’ cycle?”

Despite critiques to her abrasive language, Fair said she believes her methods are more likely to bring about the results she wishes to see.

“The idea you can effect change by using the normative language expected of someone with a Ph.D. is false,” Fair told The Washington Post. “I aim to create language that creates as much discomfort as I am forced to feel in this regime.”

Fair said she strongly objects to attempts to restrict women’s ability to express their anger over sexual assault and rape culture.

“It’s another way to discipline women’s bodies, by asking us to discipline our rage,” Fair told The Washington Post. “I cannot tell you the rage and hurt it feels as all of those men on that Judiciary Committee kicked sexual assault survivors in the gut.”

Fair’s Saturday tweet is not the first time the professor has received significant attention for her commentary. Last year, Fair was accused of calling German police officers Nazis during an altercation at a Frankfurt airport. In November 2015, she came under fire for publicly supporting the use of drones in civilian-inhabited regions.

Coverage of Fair’s tweets follows the suspension of National Catholic School of Social Service Dean at Catholic University of America Will Rainford for his tweets questioning the validity of Kavanaugh accuser Julie Swetnick’s account.