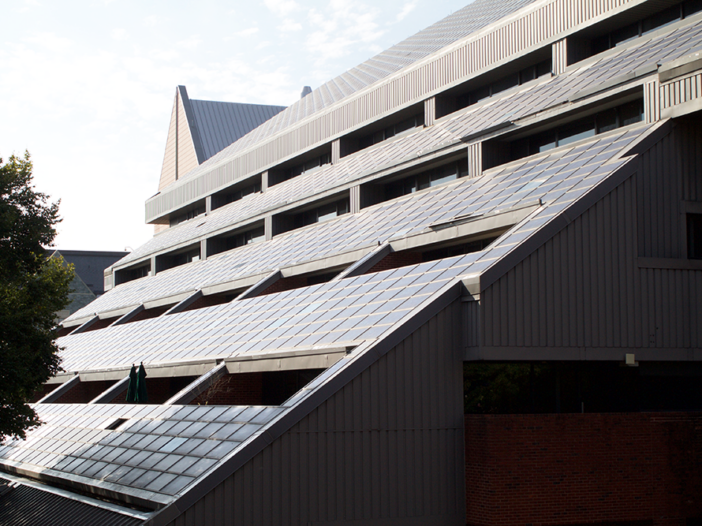 This article references racist content that is potentially upsetting. Please refer to the end of the article for on- and off-campus resources.

A Georgetown University professor is facing backlash from students after quoting the N-word during a lecture on free speech last Thursday.

Michele Swers, a professor of American government, read out the racial slur in her “U.S. Political Systems” class while quoting Clarence Brandenburg, a Ku Klux Klan leader. Swers did not censor the racial epithet when reading the quote off a PowerPoint slide presented to the class. The incident has since sparked a formal bias complaint to the university and a classwide letter from students to Swers.

According to students in the class, after Swers read the quote, students began to send messages using Zoom’s chat function, expressing their discomfort. In response to the students’ messages Swers said that although the quote is racially offensive, it has value in an academic context, according to a class recording obtained by The Hoya.

“I should certainly apologize for it,” Swers said in class on Thursday. “I myself am uncomfortable using that language. But I feel from an educational standpoint that I owe it to you all to try and lay out these issues.”

Students in the class were shocked when Swers used the word, according to a student in the class, who chose to remain anonymous for fear of retribution.

“I sat there for a second and I was like, did I hear this correctly? Like, what? What did I just hear,” the student said in a Zoom interview with The Hoya.

After addressing the Zoom chats, Swers said she continued with the remainder of her lecture.

“After apologizing, I then moved to the rest of the class material, including hate speech, hate crimes, and how social media should be moderated,” Swers wrote in an email to The Hoya. “When the class ended, I quickly e-mailed my department chair to ask for a meeting in the afternoon to discuss what I could do to restore student trust.”

Later that day, Swers sent a classwide message on Canvas, an online assignment platform, announcing the offending word had been removed from the uploaded PowerPoint slides on Canvas, and the class’ next reading quiz would be canceled.

Several students found Swers’ response in class unsatisfactory. After class on Thursday, students in the class created a shared Google Doc and began writing a letter to send to Swers. In their letter, students criticized Swers’ justification and her continuation of class.

“Professor Swers, you did not take responsibility for your contribution to any harm students might have sustained in hearing you read the word aloud, nor did you commit to discontinuing your use of the word in future classes,” the letter reads. “Following this inadequate response, you continued the class without pause.”

The letter also alleged that Swers referred to Brandenburg as “not a terribly sympathetic figure.”

“In this vein, to call Clarence Brandenburg, a leader of the KKK, ‘not a terribly sympathetic figure’ trivializes the threats that white supremacy and domestic terrorism continue to pose in our country,” the letter reads.

Mirka Sosa (COL ’23), a student in Swers’ class, sent a bias complaint to the university’s Office of Institutional Diversity, Equity and Affirmative Action, formally notifying the Georgetown administration of the incident.

In no scenario should Swers have used the slur, even in an educational setting, Sosa wrote in her complaint, which she shared with The Hoya.

“Professor Swers, as a white person should not say that word at all,” Sosa wrote in her complaint. “This incident was very harmful to many students, especially students of color in this class, and I do not feel like she took full accountability for that.”

Using the slur during class did not add any educational value, but instead detracted from the lecture, since so many students were distracted by the incident, according to Sosa.

“A professor saying that, it almost gives the precedent that it’s okay to say this word, even if it’s taken in an educational standpoint,” Sosa said in a Zoom interview with The Hoya.

A staff member from the IDEAA office replied to Sosa’s email, thanking her for the report and offering to set up a meeting.

All complaints filed with IDEAA are investigated fully, according to a university spokesperson.

“Following an IDEAA investigation, the university can hold known community members accountable for acts that violate our institutional policies through the imposition of sanctions and educational remedies if a policy violation is identified,” the spokesperson wrote in an email to The Hoya.

“Georgetown is committed to being an inclusive campus that provides welcoming learning spaces for students of all backgrounds while ensuring faculty members and students can openly pursue scholarship, critical thinking, and discussion,” the spokesperson wrote.

The students emailed the joint letter they drafted to Swers on April 16. On April 18, Swers sent a classwide apology email. After considering student feedback about last week’s class, Swers apologized for using the slur and said she changed her curriculum for future semesters.

“While I indicated at the beginning of class that you may find the material on free speech to be offensive and upsetting to hear, by reading from the Supreme Court’s Brandenburg decision, I clearly failed in my goal of creating a class climate where all can express their views in a safe place and learn about and discuss complex and difficult issues,” Swers wrote in the email. “As this language is painful to you, it is also painful to me. I am deeply and sincerely sorry for the pain this has caused you, my students.”

On Tuesday in class, Swers apologized directly to her students and gave them time at the beginning of class to fill out a Google Form to share their thoughts on Thursday’s incident.

Anita Gonzalez, a professor of African American studies at Georgetown and the incoming co-leader of the university’s newly created Racial Justice Institute, said the “moment of failure” was when Swers moved on with her lecture without addressing the gravity of the epithet she had just uttered.

Students have previously faulted professors for using the N-word in class. In April 2019, four Black students reported Georgetown associate professor Timothy Wickham-Crowley to IDEAA for comments made in a sociology class, including using the N-word when reading a quote.

Given recent incidents of use of racial slurs at the university, the university should thoroughly respond to Swers’ use of the N-word, according to the student letter.

“We cannot allow this to be glossed over or normalized given the historical and institutional racism that Georgetown has been party to and often turned a blind eye to,” the letter reads, pointing out that the use of racial slurs is prohibited in the Georgetown Faculty Handbook.

The Georgetown community should engage in more dialogue about racial inequity, according to Gonzalez.

“If there’s no space to talk about it, the students who are feeling hurt by it are just going back to their rooms and talking to their friends and writing a letter of protest,” Gonzalez said. “I know that everybody wants her to apologize, but I feel like what she should do is have a conversation. And I think that academics too often don’t make space for conversations about race to happen.”