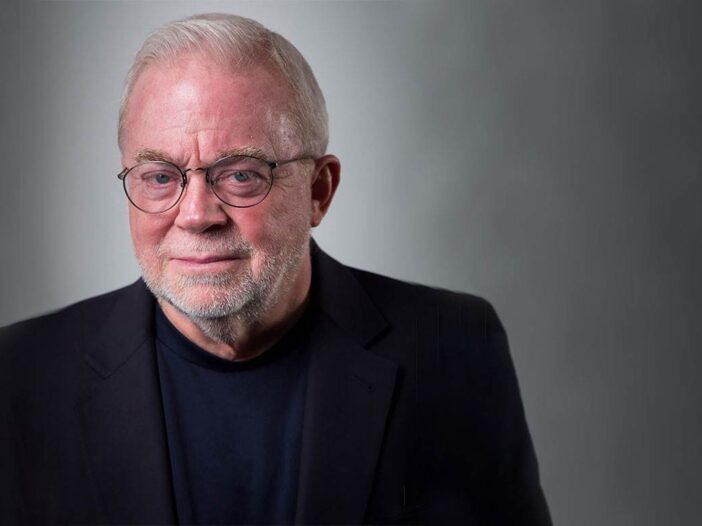 When Rev. Jim Wallis, director and founder of Georgetown’s Center on Faith and Justice (CFJ), co-authored a letter urging the Russian Orthodox Patriarch to oppose the invasion of Ukraine, he put faith into action for social justice.

Wallis co-authored the letter alongside fellow church leaders in response to sermons from Patriarch Kirill of Moscow supporting Vladimir Putin’s invasion of Ukraine. This marks another step in his lifelong mission of promoting the union of justice and faith.

“I like faith better than religion —  what faith means, and how faith and justice are integral to each other, how they belong together, and how if you have faith without justice, it can become very private, and very personal and even very tribal,” said Wallis.

At Georgetown, Wallis engages students with issues at the intersection of religion, race and society. Raised in Detroit, Michigan, by an Evangelical family, Wallis began advocating for social justice after encountering segregation in his city. He continued participating in anti-war and civil rights protests during his time at Michigan State University (MSU). He then attended Trinity Evangelical Divinity School (TEDS), served in Obama’s cabinet and taught at Harvard.

Wallis, a lifelong anti-war and anti-racism advocate, has strengthened the relationship between justice and faith through his journalism, political activism and teaching. After working at “Sojourners” for 50 years, a monthly magazine on religion and politics, Wallis joined the CFJ in 2021 as its founder to foster dialogue and advance action for change. Wallis said he hopes to continue inspiring a generation of activists during his time at Georgetown.

Wallis founded the CFJ In 2021. The Center focuses on the relationship between faith and civic life in relation to racism, poverty, peace and justice.

Wallis established the CFJ to integrate faith into discussions about the fundamental problems with society. To Wallis, Christianity is linked with engaging social justice.

“Repenting in Judaism, Islam, and Christianity doesn’t mean feeling sorry or guilty. It literally means turning around because you’re going in the wrong direction,” Wallis said. “Everything, whether it be criminal justice, and education, the economy, housing, healthcare, we’ve got to turn things around.”

Isabelle Picciotti, assistant to the director at the CFJ, said that the center’s autonomy from other Georgetown institutions allows it to engage more broadly with students and off-campus organizations to advance social justice.

“We’re standalone, and so that provides us with the opportunity to work directly with students, with community groups, with outside members,” Picciotti said in an interview with The Hoya.
“We’re actively working with members of Congress to push forward the hopes and dreams that people have brought to us at the center. So in a nutshell, it was organized to address questions and needs that people on campus had.”

Wallis believes that justice is the manifestation of faith in action as it works to enact virtuous change in the real world.

“Without justice, faith becomes privatized. And yet, justice without faith or some kind of sense of moral conscience can become, just finally, so angry. And so it’s easy to get angry. I’ve been angry for 50 years. And it can turn into resentment and anger and retribution, even revenge,” Wallis said. “Justice and faith can complete each other.”

Principles such as being “men and women for others” — in other words, serving the common good — are emphasized throughout the center, Picciotti said, which can motivate students to take a stand for issues they care about.

“We are trying to both share our work but then inspire them through our work for this idea of magis, for this idea of being men and women for others,” Piciotti said. “How do we take our own skills and our own resources and best apply those to others?”

Wallis hopes that the center can foster advocacy within students.

“Georgetown is the kind of university that could help provide leadership for such a student movement around the country,” Wallis said.

Each month, Wallis hosts a forum for nationwide faith leaders to discuss current sociopolitical issues. Topics range from international problems, like the war in Ukraine, to domestic issues, like voting rights challenges. Usually a space for dialogue, the American faith leaders believed they could affect tangible change by condemning Kirill’s actions in a letter.

Wallis said his letter to the Russian patriarch had three goals: stopping the war in Ukraine, supporting democracy in the face of autocracy and exploring the role of religion in shaping a peaceful future.

“Churches can always be pastoral, which is good, taking care of the victims, comforting, consoling, loving people, what I call pulling bodies out of the river,” Wallis said. “We’re good at that. But sometimes you got to go upstream and see what or who is throwing them in.”

A Crisis of Faith

Wallis, who grew up in Detroit in the 1950s and 1960s, was raised by Christian parents. As a teenager, Wallis found an interest in politics and the news, and started to question the differences between the experiences of white and Black people living in Detroit.

“I was listening to my city — you know, just reading the papers — and you’re in the news and having conversations and something really big, seemed really wrong,” Wallis said. “And nobody in my white world would talk about it.”

In search of answers to the questions that had been plaguing him, Wallis approached his own church leaders. Wallis said he was not given clarity on the disparities between his white upbringing and the experiences of his Black neighbors.

“I asked these questions of my church — why it seems like we live in white Detroit very differently than people do in Black Detroit,” Wallis said. “They said, ‘You’re too young to ask those questions. When you get older, you’ll understand’ or they said, ‘I don’t know, it’s always been that way. I don’t know.’ So I decided to go to the city to get some answers.”

During the ’50s and ’60s, discriminatory housing laws separated Black neighborhoods from white suburbs, fostering discrimination and inequality in the city of Detroit.

Wallis said he took jobs in Detroit to raise money for college, which allowed him to work alongside people from diverse backgrounds, opening his eyes to the lived experiences of his Black co-workers and neighbors.

Wallis said an elder in his childhood church took him aside after learning that he had been spending time in the city alongside Black coworkers.

After losing touch with his faith, Wallis attended MSU from 1966 to 1970, earning his undergraduate degree in Social Science.

“I left my home church — my faith — and I went to Michigan State. And I began to organize. And so I became involved in the movements of my generation,” Wallis said.

While at MSU, Wallis protested against the United States’ involvement in the Vietnam War. Alongside other student activists, Wallis debated State Department representatives about the truth of the war, marched on the Michigan capitol and participated in a nationwide student strike in 1970.

“I became involved in the movements of my generation, but I wasn’t a Christian,” Wallis said. “In college, I was organizing. And after years of organizing and those were days when you know, the police were all over you. And I had death threats in my dorm at night from the right wing and tear gas at lots of demonstrations.”

Despite the danger associated with protesting, Wallis felt drawn to the cause of activism.

“In the middle of that, I began to think about what I want the rest of my life to be,” Wallis said.
“And I just decided to be an activist to change the world. But I needed some foundation, some basis for that.”

Wallis began to search for a philosophical basis for his activism. He read the works of philosophers Ho Chi Minh, Che Guevara and Karl Marx, but was left unsatisfied.

Wallis found himself returning to the New Testament. While he had read the New Testament as a child, he said reading it through the eyes of an older and more experienced adult put more weight on the passages and their meanings.

Wallis said one passage in the New Testament converted him back to his faith: Matthew 25:40. In the passage, Jesus equates his followers’ love for himself to their care for the poor, sick and marginalized.

Wallis’s desire to ground his new faith and enact change led him to Trinity Evangelical Divinity School (TEDS), which he notes was a predominately white and conservative seminary where he studied from 1970 to 1972.

While at TEDS, Wallis continued speaking out against the war in Vietnam, leading a group of 10 students to mobilize and strike. The group drew the attention of the Chicago Sun Times, which began to cover their activities.

“It apparently cost the seminary a million dollars in lost contributions,” Wallis said. “We were called the radicals — the radicals at Trinity, speaking up and out organizing other students and they said, ‘We’re not going to support a school that lets people like that in.’”

The group of students also created and distributed “The Post-American”, a quarterly that expressed their views on politics from an Evangelical Christian lens, each student donating $100 of their tuition money for the following semester to finance its publication. The quarterly’s cover displayed a sculpture of Jesus with an American flag draped over it.

“The cover line that I chose was, ‘And they crucified you,’” Wallis said. “That controversial cover got some attention, and it went around the country.”

Wallis and the other students involved in the project moved to Washington, D.C., in the fall of 1975, later adopting the name “Sojourners,” which refers to the biblical metaphor of God’s people as pilgrims committed to his message.

“Sojourners” became a monthly magazine focused on faith, politics and culture. The magazine also served as a faith-based community that organized national events on behalf of peace and justice programs to support the District community.

“I was a follower of Jesus and I went to seminary just to get my faith grounded, and then I was gonna go into probably law and politics, but I was at seminary when all the things of what became Sojourners just started,” Wallis said. “And for a few, and then a movement started. And that was the rest of my life.”

Wallis continued to be involved in activism at the intersection of faith and justice. In 2009, Wallis was appointed faith advisor to Obama, whom he had befriended during Obama’s time as a state senator. Additionally, he served on Obama’s Advisory Council on Faith-based Organizations and Neighborhood Partnerships, a group of faith leaders committed to serving vulnerable populations.

Wallis said Obama had to send a representative to personally escort him to the Oval Office after his name appeared on the Secret Service’s security list because of his past arrests during protests on the White House, including the 1989 organized prayer for six Jesuits murdered in El Salvador.

“A small group of us faith leaders were in security,” Wallis said. “All the others got in, and I couldn’t get through security.”

While serving on the council, Wallis helped to make recommendations to the White House Task Force on Economic Recovery and Domestic Poverty, encouraging the Obama Administration to expand educational opportunities, welfare benefits and job training through faith-based organizations.

Despite his advisory role in the Obama administration, Wallis said it is key for religious advisors to remain ideologically independent from political leaders.

At Georgetown, Wallis said he hopes to use this independent voice to impact policy.

“How do we take Jesuit values into public policy?”, Wallis said. “I want the Center to be a hub for that conversation.”

Wallis said he urges students to get involved in this conversation and create change.

“I say to students, you’re smart enough, not just to manage that system, but to change it,” Wallis said. “See how you can change it.”