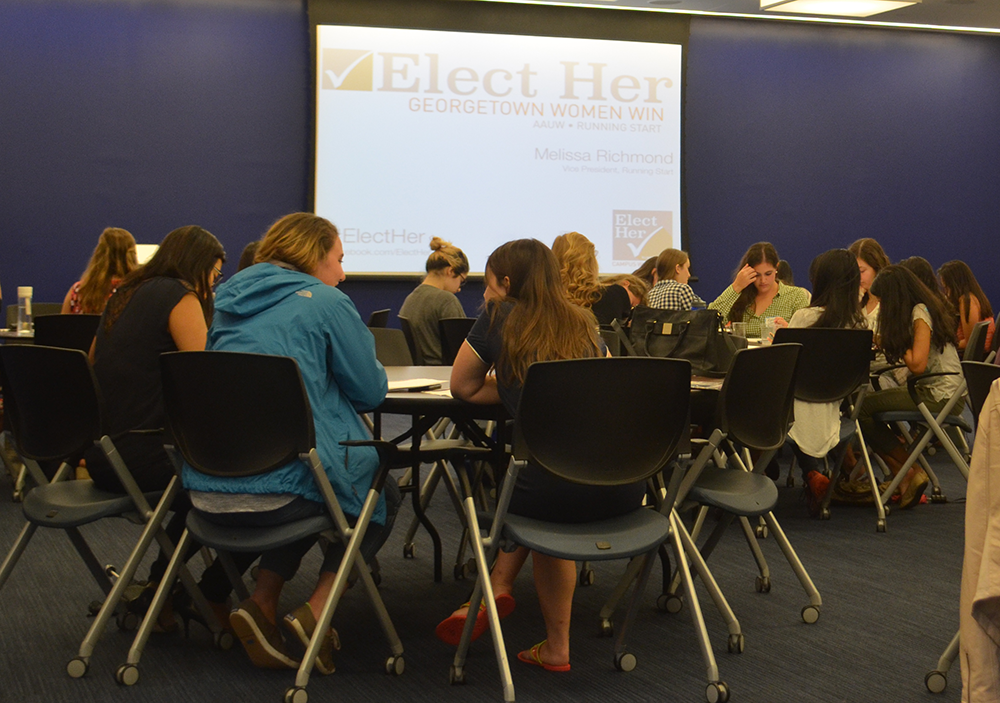 Elect Her, a national program that prepares college-aged women to run for student government and political office, held its second annual program at Georgetown in the Healey Family Student Center Saturday.

The three-hour event, hosted by the American Association of University Women and Running Start, featured a series of lectures and an address from Washington, D.C. City Councilwoman Anita Bonds. Other sponsors of the session at Georgetown included the Georgetown University Women’s Center, the Biondi Copeland Family Fund, the Institute of Politics and Public Service, the McCourt School of Public Policy and the Women Policy Makers House.

In her speech, Bonds encouraged attendees to become involved in politics.

“We would love to have a woman lead our nation,” Bonds said.

Running Start Vice President Melissa Richmond led the majority of the presentations, kicking off the event with an address titled “The Importance of Young Women Running for Office.”

According to Richmond, Running Start was formed in 2007 to support young women who are considering careers in politics.

“Young women and girls need to be educated about politics earlier in life if the makeup of the political leaders in our country is to transform,” Richmond said.

At colleges in D.C., women account for 39 percent of student government executives.

Elect Her is held on college campuses around the country, with sessions planned at around 50 schools for 2016. According to its website, 76 percent of 2015 participants who reported running for student office won their races.

Other speeches in the program cited a number of barriers to women running for office, including feelings of inferiority, media scrutiny and concerns about family and home life.

Despite the event’s overall focus on politics, Richmond stressed that the skills taught at Elect Her can be applied to a wide range of fields.

“Even if you don’t run for office, the skills of building a network or giving an elevator speech could help you to start a business, be a nonprofit leader or be a good servant in your community,” Richmond said.

Participants of Elect Her also automatically join the AAUW’s network of 170,000 members and supporters, 1,000 local branches and 800 college partners, including Yale University, Harvard University and the University of Pennsylvania.

Kelli Baker (COL ’19), an attendee of the event, said that she was drawn to Elect Her after encountering criticism during a campaign for student government in high school.