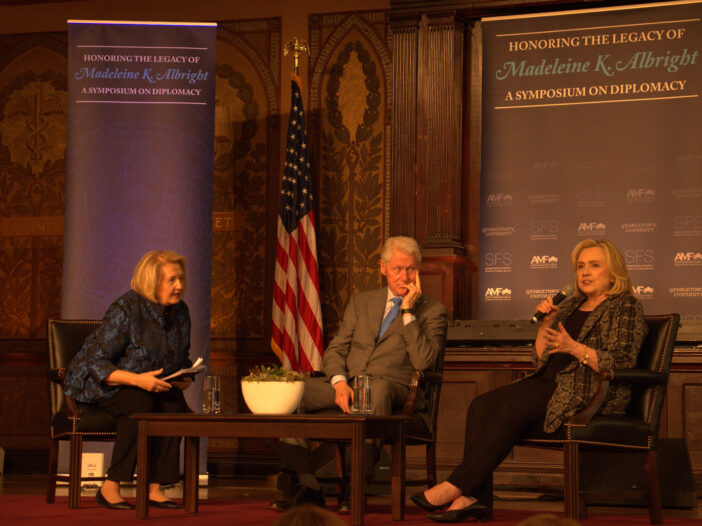 Former U.S. Secretary of State Hillary Clinton and former President Bill Clinton (SFS ’68) reflected on the accomplishments of the late Secretary of State and Georgetown professor Madeleine Albright at a symposium held in her honor.

The Clintons joined moderator Melanne Verveer, the first U.S. Ambassador for Global Women’s Issues, to celebrate Albright’s life of public service and her commitment to her students at the final speaker event of the Sept. 29 symposium, which featured a morning session and a slate of speaker events in the afternoon session.

President Clinton said in his final conversation with Albright just weeks before her death, she said she didn’t want to waste time discussing her health — she wanted to talk about Ukraine.

“I’ll never forget it. It was an amazing conversation, it was so vintage Madeleine,” former President Clinton said at the event. “She was just a really smart woman that couldn’t imagine why you waste the last few weeks of your life on reminiscences or regrets when you’d had the life she’d had and there was so much still to do.”

Secretary Clinton spoke on Albright’s personability and unique ability to connect with others.

“Madeleine really had a capacity for friendship; she was somebody who loved to host dinner parties, who loved to go out to dinner, loved to have conversations and loved to come to the White House residence and put her feet up,” Secretary Clinton said at the event. “It was incredibly disarming because she was not at all shy about expressing her opinions, including on matters of some delicacy.”

The morning session of the symposium featured a single speaker event titled “The World She Shaped: Albright’s Academic Legacy,” where G. John Ikenberry, a professor at Princeton University; Stacie Goddard, a professor at Wellesley College; Deborah Avant, a professor at the University of Denver; and ​​Angela Stent, Professor Emerita at Georgetown University, discussed Albright’s commitment to protecting democracy, her role in bringing countries like Poland, Hungary and Czechia into NATO and the role of women in democracy.

Walsh School of Foreign Service Dean Joel Hellman kicked off the afternoon session of events and said Albright has left a lasting impact on her students, the Georgetown community and the world.

“Madeleine Albright changed the world by empowering others,” Hellman said at the event. “She inspired generations of students not only to understand the world, but to serve the world. And her students, so many of whom are here today, went on to do just that — a legacy that is almost incalculable.”

Albright would have celebrated her 40th year as a Georgetown professor this Fall, and although she eventually became known for a lifetime of service at the apex of U.S. foreign policy and as the first female U.S. Secretary of State, Hellman said she always preferred to be known first and foremost as a professor.

“She said to me, ‘the one thing I tried hardest not to give up was my classroom,’” Hellman said. “Madeleine Albright lived the values of our school and was the very essence of Georgetown in so many ways. We’re proud to call her ours and we’re blessed by what she gave us.”

Albright’s sharp sense of humor, unparalleled diplomatic mind and unwavering commitment to democracy were among the topics U.S. Deputy Secretary of State Wendy Sherman and U.S. Ambassador to the United Nations Linda Thomas-Greenfield spoke about with moderator Verveer at the second event of the afternoon session.

“It’s about remembering that no matter where you are in the world, whether you’re across the table from a friend or from an adversary, you have to be able to put yourself in your counterpart’s shoes to remember that they too are human beings with their own histories, their own interests, their own points of view,” Sherman said. “That’s the spirit Madeleine brought to her classroom here at Georgetown.”

Thomas-Greenfield said Albright was her role model, shaping the way she has approached her role as U.S. Ambassador to the United Nations, a seat Albright filled around 25 years prior.

“When she spoke, people listened. She was grateful, graceful, generous and strong. She was whip-smart, but at the same time down to earth. I remember thinking to myself, ‘This is what leadership looks like,” Thomas-Greenfield said at the event. “I will always have her as the pin sitting on my shoulders, guiding me as we take on some of the world’s most pressing challenges.”

President Clinton said Albright’s efforts to find joy in her work made her a particularly compelling negotiator.

“She thought if people could see that you like them, even if you thought they were wrong politically, that it made a big difference in the conduct of human affairs,” President Clinton said at the event. “You have to realize that as intensely as you care, you should still live. The way she lived made her more effective politically — she did better when she was chewing out with a smile on her face.”