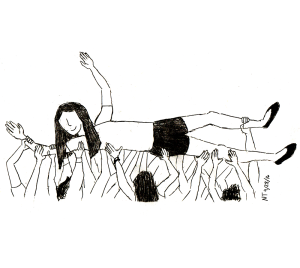 In my freshman year, I had no real understanding of mental health. Mental health issues were still a distant concept to me then, and to be honest, as much as I hate to admit it, I thought I was stronger than the people who struggled with them.

Psychologists estimate that one out of every three individuals in the United States will experience an episode of depression at some point in life. When I came to Georgetown, I was among the two-thirds. Before the end of my freshman year, I became the one out of three.

That spring, I began slipping into something I did not recognize, sinking day by day deeper into apathy, emptiness and desperation. After the first five months, it was as if the color had seeped out of my surroundings. Music became just noise to me. I could not connect emotionally with my friends, so I avoided company. I did not even have the energy to play with my 9-year-old brother anymore. I felt dead inside.

Every night, those losses tore me apart. The depression sat in my chest, more painful than anything I had ever experienced physically, and I lay curled up in bed whimpering desperately, “Father, God, anything, just please take it away.”

What I knew so little about — depression — came bubbling to the surface of my awareness, and I was crippled with fear when I faced it.

My experience with depression was a process of understanding. During that year, I threw away all the assumptions I had unwittingly stacked up in my head previously. I had assumed before that depression was just another word for people who were really sad, that psychiatric medicine was only for messed-up people. I once thought that Christians who have fulfilling relationships with their God do not get depressed. I thought that if I tried hard enough, I could make myself happy again. I would never want to die.

I struggled with mental illness during freshman and senior year, but I know I am not alone in my experiences. Mental illness is shoved into the corners of our society. Clinical depression is so seldom talked about that in my ignorance I did not recognize it when I saw it both in myself and in others.

Mental illness makes us uncomfortable. We are used to diagnosing physical ailments and blaming the body — but the mind is the self, a force that should allow us to overcome struggles, both physical and mental. We accept the body’s fragility, but the idea that the mind could suffer from a sickness is frightening.

I believe our culture is steeped in a myth of control: that we are always in complete control of our minds. Control is reassuring because it provides a sense of security. This makes it hard to see depression as an illness or an authentic cause of pain. The control myth makes it easy to blame individuals for their own mental illnesses.

Because of our myth of control, we often force mental illness from public discussion, trading in understanding for assumptions and a sense of control. The tragic result is one in three people is forced to fake through life while struggling to survive.

Fortunately, our generation is becoming increasingly cognizant of these issues. At Georgetown, we have begun to provide resources for those suffering from mental health issues. Student groups have demanded better resources for those in need, and the administration has taken steps to provide greater services. Individuals are making their stories known through an effort called #breakthestigma, a campaign to raise awareness of mental illness and combat stereotypes. On April 24, the Georgetown University Student Association launched Project Lighthouse, an online, anonymous peer-to-peer counseling service that provides direct support to students dealing with mental health issues.

While I am deeply moved to see these efforts, I want to call attention to the importance of being individual allies and providing understanding. An understanding of this human experience is one of the last walls we will have to break down to erase stigma behind mental illness, and the responsibility to speak up must not solely fall on the suffering. In experiencing depression myself, I gained a new heart for others who are suffering, and this is my silver lining. While I understood mental illness better by experiencing it personally, I do not think that is the only way. I believe in the power of stories and how they can transcend personal experience, move minds and make change.

Right now, those hurting on our campus are beginning to tell their stories, and we have a responsibility to listen to them. Stories have the power to break stigma both by reminding us of the prevalence of mental illness and by allowing us to overcome our ignorance with understanding. All we need to do is to be willing to seek out these stories and listen.

One of the bravest things a person can do is stand by people experiencing something they do not fully understand, and maybe never will. I cannot fully express the comfort I feel when my friends simply recognize the name of my medicine — evidence that they have stood by and listened to me. There is nothing more reassuring than to understand one’s struggles and be understood.

To the two out of three: You are the rocks we touch down on when we struggle and fight through our own mental illnesses. Thank you for helping us push back against the trials and tribulations of our lives.

Brittany Feldott is a senior in the college.