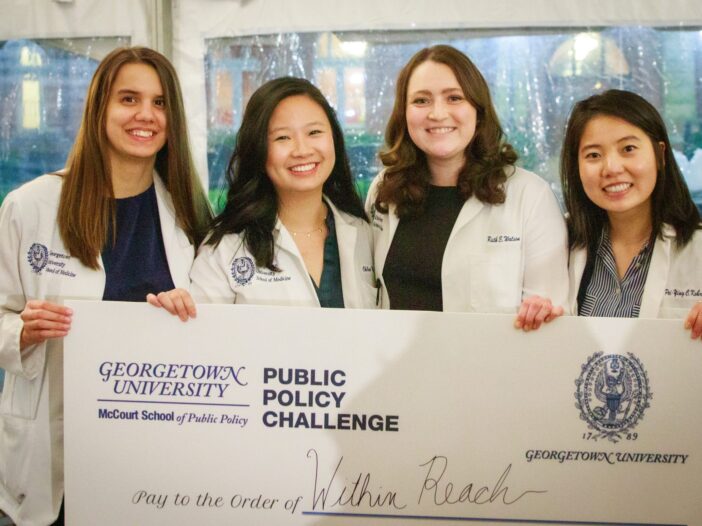 The annual competition, which is hosted by the McCourt School of Public Policy, invites graduate students to submit policy proposals that offer a solution to a local issue of their choice. The winning team, whose proposal was named “Within Reach: Ending Opioid-Related Deaths in the District,” proposed increasing access to naloxone, an opioid overdose reversal drug, by installing opioid rescue kits at bus stops in Wards 5, 7 and 8.

The “Within Reach” team, comprised of Kira Chandran (GRD ’23), Pei-Ying Kobres (GRD ’23), Chloe Wang (GRD ’23) and Ruth Watson (GRD ’23), received a $3,000 grand prize for placing first in the competition while the other four finalists were awarded $1,500 scholarships. Over 50 teams submitted proposals for the competition.

The four students have all been involved in the Hoya Drug Overdose Prevention & Education (DOPE) Project, an initiative that provides training for recognizing and treating opioid overdoses, since their first year of medical school.

The team’s work with DOPE helped develop their shared passion for solving the District’s opioid crisis, according to Chandran.

“As one of the leaders of the Hoya DOPE (Drug Overdose Prevention & Education) Project, I have worked with many community organizations within DC to educate people about opioid overdoses and distribute naloxone,” Chandran wrote to The Hoya. “Through this work, I have realized some of the barriers to obtaining naloxone. This was part of the inspiration for our project.”

The team says it is important to help ongoing efforts to raise awareness for the prevention of opioid-related deaths.

“We believe that community access to naloxone and overdose education are important parts of reducing opioid-related morbidity and mortality in DC,” the team wrote in a statement to The Hoya. “There are many people who have put a lot of work into reducing opioid-related deaths in DC, and we hope that our small contribution helps make DC a healthier community.”

The Centers for Disease Control estimates that 75,673 people died from opioid overdoses between April 2020 and April 2021, a 34.98% increase from the 56,064 opioid-related deaths recorded during the same period the year before.

As health practitioners in training, members of the team say their clinical work with patients has made them intimately aware of the suffering opioids cause among patients and the urgency in finding a solution.

“We are extremely proud to have taken an issue (opioid overdoses) that we witness every single day in the hospital, and engineer a harm-reduction policy that aims to decrease opioid-related deaths in our community,” the team wrote.

The practicality and efficacy of the team’s proposal ultimately convinced the judges to vote for them among stiff competition, according to Jaclyn Clevenger, Director of the Public Policy Challenge.

“The level of competition at this year’s Georgetown Policy Challenge Finals was incredibly high, with teams presenting ideas focused on vertical farming opportunities, youth employment programs, and housing affordability and sustainability,” Clevenger wrote in an email to The Hoya. “However, the ‘Within Reach: Ending Opioid-Related Deaths in the District’ team stood out for their proposal’s potential to make a significant and immediate impact across Washington, DC.”

The “Within Reach” team will now work with the Public Policy Challenge’s leadership to implement their proposal with their prize money. Georgetown Associate Vice President for Local Government and Community Engagement Heidi Tseu is helping connect Challenge teams with policymakers in D.C. to finalize their proposal and develop an advocacy strategy.

According to Tseu, the District’s government provides opportunities for students to create change in their communities through the legislative process.

“DC’s local government community has an open and dynamic process, which allows for great opportunities to have student voices heard,” Tseu wrote in a statement to The Hoya. “In the past we’ve had the opportunity to support student advocates who’ve succeeded in achieving local policy changes, such as funding to support immigrant legal services and DC’s DACA students.”

The team said their participation in the challenge has informed their other responsibilities.

“Working with this initiative has been an important part of our medical school experience,” the team wrote. “As we have entered our clinical rotations, we’ve seen first hand just how important opioid issues are to the DC community.”