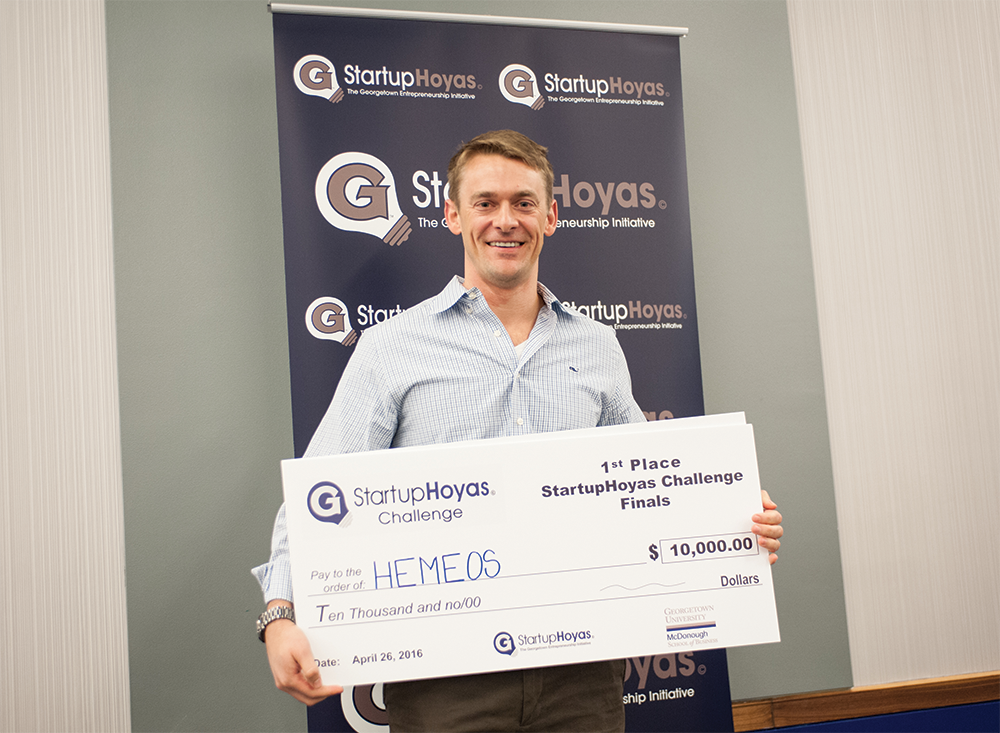 Originally founded by alumni Jon Fernandez (GRD ’16), Doug Grant (GRD ’16) and Craig Poland (GRD ’16) in 2015, Hemeos gained attention in the university community in May when it won first place out of 80 contestants at the Georgetown Entrepreneurship Initiative’s Entrepalooza pitch competition.

The startup, which matches primarily black transplant applicants to compatible marrow donors through a digital registry, incentivizes donation with a $2,000 payment, according to its website.

However, Hemeos is now in danger of violating federal regulations regarding payment for bone marrow stem cells.

While existing federal law under the 1984 National Organ Transplant Act bans the sale of internal organs and bone marrow — punishing violators with up to five years in prison — a 2011 federal court ruling allowed for marrow donors to be paid under certain conditions, which Hemeos meets.

Drawing on reasoning that blood plasma donors can be legally paid for their donations, the U.S. Court of Appeals for the Ninth Circuit decided that new bone marrow collection methods, which cause the donation process to be similar to giving blood and not a solid organ, made these conditional marrow payments permissible.

The newer donation method, which Hemeos advocates, is called apheresis, and involves a patient taking medication to increase the production of bone marrow stem cells in their bloodstream and then removing the cells, as in a standard donation of blood plasma or platelets. This is less invasive than older methods of bone marrow stem cell collection, which involve the use of massive needles inserted directly into the bone.

However, in direct contrast to the federal ruling, the Obama administration proposed regulations in 2013 that would close the payment exception for marrow donations through apheresis.

Grant said Hemeos’ business will be threatened if the regulation takes effect.

“If this goes forward, this would effectively make the business model illegal,” Grant said.

Grant is optimistic, however, that the regulation will not pass when the final decision is made at the end of this year.

“There’s always a resistance to doing something new,” Grant said. “But ultimately … we all have the same goal of saving patients’ lives … I think in the end this is going to work out in our favor.”

During the Entrepalooza event in May, Grant said the current stem cell donor system — the National Marrow Donor Program — is inefficient and results in inequitable, negative effects for minority patients. Of the 2,000 patients each year who cannot find a donor in the system, one third are minorities.

“Usually people with the same racial or ethnic background are a good donor match, and what we found is that African Americans are really, really underserved on the current registry,” Grant said.

Fernandez said that the founders decided to pursue a for-profit model at Hemeos after much deliberation. The decision was made not in the pursuit of profit but because it would be easier and faster to fund the database.

“So, when you’re a non-profit, you have to rely on generosity, donations, contributions, and that’s a lot slower, and, from our perspective, people are dying and need this now,” Fernandez said. “And in order to raise the money, we need to type the donors and build the company, that’s really what pushed us down the for-profit path.”

“I wish to take a moment to applaud Hemeos specifically for its work in combating sickle cell anemia and its efforts to reach the African American donor community. Very simply, Hemeos’ purpose is to find cures for different diseases, such as blood cancer and leukemia, while using modern transplant techniques, especially peripheral blood stem cell filtration,” the two wrote in an email to The Hoya.

However, they were wary of a for-profit bone marrow registry.

“We all want to save lives — but I want to caveat that by noting that we want to save all lives, not just the lives of those patients that can afford a transplant,” Balough and Arbab wrote. “I would hate to see markups in blood cancer, leukemia and sickle cell anemia healthcare if for-profit registries overshadowed non-profit ones.”