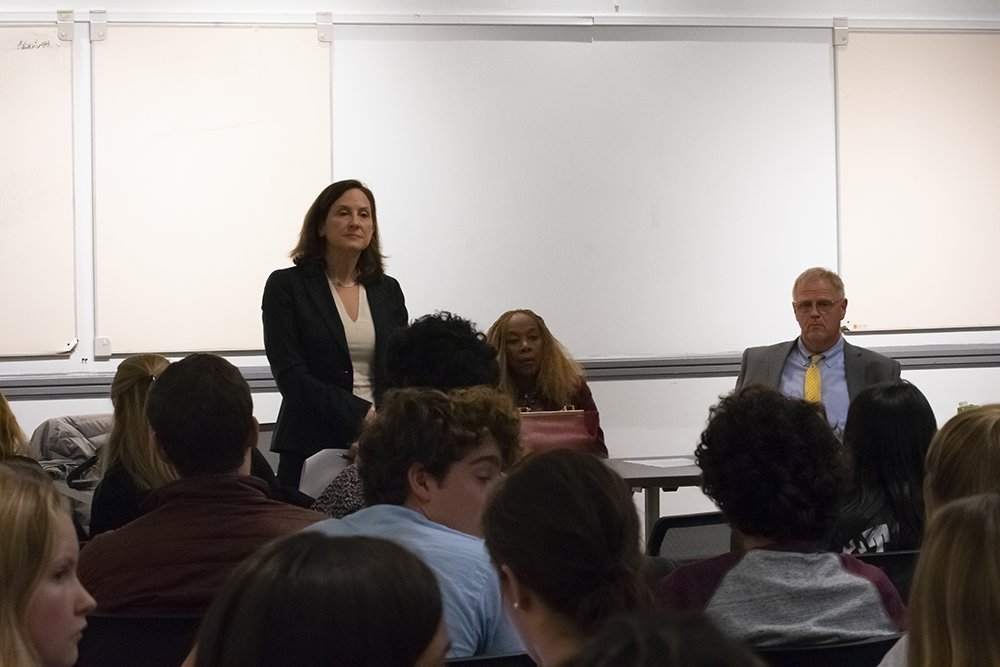 The U.S. Department of Education is holding a 60-day public comment period after its Nov. 16 release of a series of recommendations that would bolster protections for students accused of sexual assault in a number of ways, including by raising the standard of certainty needed to sanction accused students.

Georgetown chose to host a series of feedback sessions to gather student input on how they hope the university will respond to the proposed regulations, according to Vice President for Institutional Diversity and Equity Rosemary Kilkenny (LAW ’87), a coordinator for the events.

The Education Department’s proposed allowance for cross-examination of the survivor by the accused student’s adviser was a major concern of students present at the first session, according to data collected from the event’s RSVP form.

Students questioned whether Georgetown would provide legal counsel to all parties involved, as those of lower socioeconomic backgrounds could be unfairly affected.

If the university does not provide counsel for all students, students who cannot hire a lawyer will have their capacities to advocate for themselves limited, according to Georgetown University Student Association senator Dylan Hughes (COL ’19).

“You will see that classist implication of some students hiring lawyers under the name of advisers, and others not being able to,” Hughes said said at the Monday feedback session.

The additional requirement of all three qualifications for behavior to be considered sexual harassment makes it harder for survivors to provide proof, according to Students Taking Action Against Interpersonal Violence member Kory Stuer (COL ’19).

“The change to the ‘and’ is a very significant change,” Stuer said at the Thursday feedback session. “Particularly in the last few years where we have seen movements like #MeToo and the emergence of ‘Times Up,’ I personally feel that it is incredibly important that we are not going backwards in the context of these movements.”

The student feedback will help the university formulate its draft comments on the proposals, according to Olson. The coordinators, who include Olson, Kilkenny and Guttman-McCabe, will make the comments public to the student body in January before making their official submission.

Georgetown administrators have sought to use these sessions to listen to the student body’s concerns before taking action, according to Olson.

Students present at the first session were disappointed with the level of the university’s engagement in the dialogue, according to STAIV member Maya Moretta (COL ’21). (Full disclosure: Moretta previously served as an opinion assistant for The Hoya.)

“I think the majority of people kind of felt like the university was hiding behind a lawyer not connected to the university in order to protect themselves,” Moretta said in an interview with The Hoya. “I felt like it was very unprofessional for the administration to not speak out about any of the issues pertaining to Georgetown.”

The event did not increase the transparency of the university’s intended response, according to Courtney Smith (COL ’21), who was present at the first session.

“Students were clearly disappointed in the university officials’ lack of involvement because many students attended the session hoping to gain more insight into how the university is planning to respond,” Smith wrote in an email to The Hoya.

Students also expressed concerns that the proposed Title IX regulations could lessen protections available for survivors of assaults that occur off campus.

Tehya Corona (COL ’20) said she disapproved of the changes to the regulations because they would allow the university to neglect a number of potential sexual assault survivors at Georgetown.

“Everyone can understand that in a college town, places that are not technically on campus impact our community,” Corona said during the Monday feedback session.

Though Georgetown may not be able to address off-campus incidents through Title IX under the new proposed regulations, the university could still take disciplinary action through other means, according to Guttman-McCabe.

“Georgetown currently regulates conduct that happens off campus in other ways, and so I think the university would be looking for a way to continue to be able to address this type of behavior,” Guttman-McCabe said.

The Education Department’s proposal also calls for an increased focus on the use of supportive measures like formal counseling and no-contact orders. Investigations of every formal complaint will also be held to a higher legal standard of proof, which would make it harder for universities to take disciplinary action against accused students.

Still, survivors should be allowed to decide whether supportive measures are sufficient or if university investigation should be undertaken, according to Moretta.

Supportive measures alone have often been ineffective in helping survivors of sexual assault, according to Smith.

The feedback sessions are occurring during a monthslong search for a new Title IX coordinator.  Samantha Berner is currently serving as both the Title IX investigator and interim Title IX coordinator after the previous coordinator Laura Cutway departed in June, a situation for which the university has received criticism.