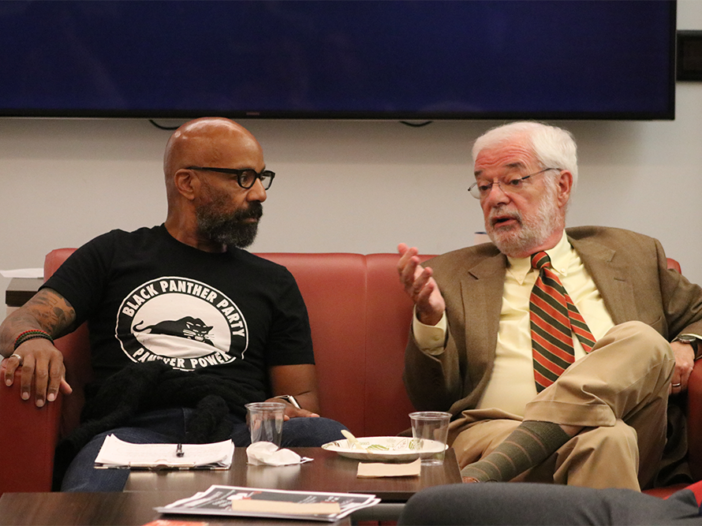 Sports journalist and ESPN panelist Kevin Blackistone stressed the need to address free speech restriction in professional and collegiate sports at an event in the Baker Living Room Tuesday.

Blackistone started his career at The Boston Globe as a city reporter before transitioning to the sports section, becoming an award-winning investigative reporter and sports columnist. He frequently appears on the ESPN “Around the Horn” program, which features roundtable discussions of sports news.

The event, “Free Speech and Sports,” was hosted by the Free Speech Project at Georgetown University, a nonpartisan project launched in 2017 that seeks to highlight issues of free speech around the world.

Spectators pay for tickets to sports games expecting the event to be a form of entertainment separate from politics, which causes the restriction of free speech for athletes, Blackistone said.

“There are a lot of restrictions, constrictions in sports that you won’t necessarily find other places which is why when an incident, a moment does take place in sports, where someone exercises their freedom of speech, it becomes such a big story,” Blackistone said. “We’ve set this up as an arena, a stage, a platform where this is not supposed to take place, and where you have surrendered your right to freedom of speech in order to participate in these games.”

Beyond the restrictions placed on professional players, colleges also prevent their athletes from speaking on particular issues, according to Blackistone.

“They can get away with what they do in terms of restricting speech,” Blackistone said. “I’m always gleeful when I see an incident where they lose that control, where athletes, sometimes coaches, but often athletes will speak their mind, very intelligently about a particular issue, or take a stance that winds up moving a needle.”

Blackistone highlighted Paul Robeson, a successful college football player at Rutgers whose career was effectively ruined after he praised the Soviet Union’s treatment of black descendants of slaves. He also recounted the story of Rose Robinson, an African American high jumper who refused to stand during the national anthem in protest of American foreign policy at the 1959 Pan American games. Her career was over soon after that, Blackistone said.

On the other hand, sports offered one of the first opportunities for African Americans to express their opinions in ways that they were not able to before Emancipation, Blackistone said.

Despite this history of sports serving as an avenue for new liberties, sports are also a domain in which free speech can be heavily restricted, according to Blackistone.

The intersection of free speech and sports has become more of a topic of discussion in recent years because of protests by professional athletes during the national anthem and other forms of political protest.

Former San Francisco 49ers quarterback Colin Kaepernick received backlash when he refused to stand for the pledge of allegiance in a series of NFL games in protest of police brutality and racism, which sparked a conversation about the participation of professional athletes in political and social issues.

Earlier this month, Los Angeles Lakers player LeBron James became the center of attention because of his comments about Daryl Morey, the general manager of the Houston Rockets, after Morey retweeted a slogan in support of the protesters in Hong Kong.

Despite the recent attention athletes like Kaepernick have received for their outspoken views on free speech, they are not the first athletes to use sports as a form of protest, according to Blackistone.

“Everyone thinks Colin Kaepernick was the first, but he’s not,” Blackistone said. “He’s really just part of a lineage.”

Athletes are held to separate standards from the general public for what they can and cannot say, according to Blackistone.

“Sports is a really tight space in which to exercise freedom of speech,” Blackistone said. “In fact, it’s almost an oxymoron because you really don’t have any, and those who exercise it suffer consequences the rest of us don’t.”