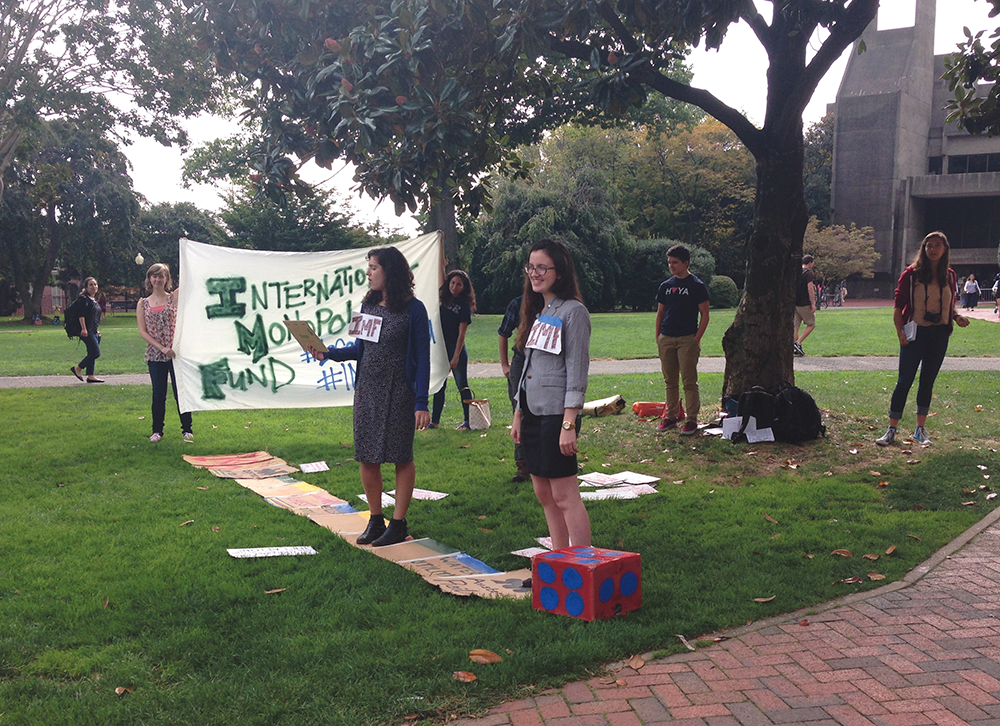 A student protest in Healy Circle went uninterrupted by the Georgetown University Police Department on Thursday morning, although H*yas for Choice was not allowed to table in the same spot last year.

The protest targeted the university’s invitation to Christine Lagarde, managing director of the International Monetary Fund, to speak in Gaston Hall on Thursday. Protesters played a live-action game dubbed “International Monopoly Fund,” satirizing the IMF’s approach to working with developing nations and the global economy.

According GUPD Chief Jay Gruber, the difference between GUPD’s reaction to the two groups is that yesterday’s protest did not involve setting up a table.

The university’s Speech and Expression Policy states that certain “public squares” are open for student tabling, such as Red Square, Regents Lawn and the lobby of the Leavey Center, known as free speech zones. The policy also specifies that protests are not subject to the same limitations as tabling activities.

According to Gruber, H*yas for Choice was removed from Healy Circle in January because they set up a table. The group was also mistakenly forced to stop tabling on the sidewalk outside the front gates in protest of a ceremony granting an honorary degree to Donald Cardinal Wuerl, archbishop of Washington — a decision in violation of the Speech and Expression Policy, for which GUPD has since apologized.

“Having the students table there, that’s really a mean difference. Anyone can set up and stand somewhere, they can hold a banner, they can hold a sign, they can voice their opinion anywhere on campus,” Gruber said. “If you read the Speech and Expression Policy, it specifically mentions that tabling has to take place in certain places on campus. It may seem kind of trivial, but there is a fine difference.”

According to protester Suzy Jivotovski (COL ’15), GUPD officers were present near the group’s monopoly performances in Healy Circle and Red Square, but did not approach the students.

“GUPD was present in the area and had their eye on us, but never came over to say anything,” Jivotovski said.

Jivotovski said the group made sure that they were fully versed in the Speech and Expression Policy to avoid altercations with university officers.

Chandini Jha (COL ’16), one of three student members of the Speech and Expression Committee, said that tables are currently considered “permanent installations” under the current policy.

“We are still having discussions as a free speech and expression committee about what to classify as permanent installations,” Jha said. “Basically, the situation is that we are still in the process of discussing if tables are installations that people can put down.”

Jha said that she hopes to work with the committee to secure more rights for tabling students.

“As a student representative on the group, I want to advocate for students. Tabling is so instrumental at Georgetown,” Jha said. “It’s the way that student groups really get their message out there, but also have a visual point of contact for the organization by having students sit and stand behind the table. It’s something that’s a continued topic of discussion.”

This article originally appeared in print with the headline “Speech Policy Tested.”