From online movements combatting microaggressions at universities nationwide to student-led rallies calling for reform at the gates of the White House, the past year has seen prolific Georgetown student activism. 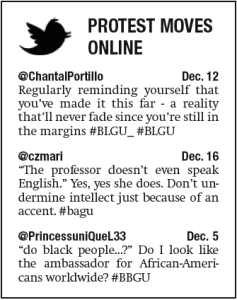 “There’s definitely a movement of students challenging their respective institutions to think critically about these issues, and I’m happy that I’m a part of it or could be a part of it, to see this happening, because I think it’s a very great way for our generation to speak to larger issues about race and class and diversity,” #BBGU organizer Aya Waller-Bey (COL ’14) said.

#BBGU, Georgetown’s first Twitter movement, launched in December 2013 to create a public and safe space for black students to voice their grievances and speak on behalf of their experiences as members of the Georgetown community, notably on the existence of microaggressions, or means of communication concealing offensive or discriminatory undertones. This movement inspired the subsequent rise of #BLGU and #BAGU, which also promoted awareness of racially charged microaggressions.

#DBKGU, a similar protest launched in February on Facebook and Tumblr, more closely followed the format of “I, Too, Am Harvard,” a photo campaign aiming to promote awareness of the prevalence of microaggressions as well as challenge racial stereotypes and show diversity within Harvard. Shavonnia Corbin-Johnson (SFS ’14), the founder of #DBKGU, organized the movement as a way to critique the negative images society often associates with the black community. The page has amassed more than 1,400 likes to date.

“I actually didn’t think it would get as large as it did,” Corbin-Johnson said.

According to Lydia Brown (COL ’15), one of the primary #BDGU organizers, #BDGU has yet to galvanize the support among Georgetown administrators that the movement would require to be successful.

“In our primary aim, I believe we had limited success. A number of prominent student leaders … knew about or participated in the conversation. There is still a long way to go. So far, no official statement from the administration has been forthcoming regarding plans for a Disability Cultural Center, nor have any of the major institutional barriers to access for students with disabilities been changed,” Brown wrote in an email.

Protest Within the Front Gates

Georgetown students’ protests, however, weren’t limited to the screen this year.

After university officials proposed the creation of a satellite residence to house undergraduate students Sept. 8, members of the Georgetown University Student Association launched the One Georgetown, One Campus campaign and gathered 400 petition signatures within three hours. In the subsequent referendum, the student body voted overwhelmingly against the university’s proposal, with just 7 percent of students saying they were in favor of the creation of a satellite campus.

Students also successfully challenged the administration to protest proposed changes to the housing process for current sophomores in February. After student pushback, policy implementation was delayed.

In October, representatives from GU Pride sat in on a Love Saxa event, protesting the Campus Ministry-affiliated organization, which aims to counter campus hookup culture, for its recent choice of allegedly homophobic speakers, including Mark Regnerus, who condemns same-sex parenting.

On-campus protest extended to employers within the front gates. The Georgetown Solidarity Committee, aided by the Georgetown chapter of the National Association for the Advancement of Colored People, Hoyas for Immigrant Rights and GUSA, organized a march in November on restaurant Epicurean and Co. to present its owner, Chang Wook Chon, with a petition demanding fair treatment of the restaurant’s workers. In response, Chon issued a statement in December restating his commitment to upholding Georgetown’s Just Employment Policy but said that he did not intend to change his business practices as a result of the petition.

Not all on-campus protests were successful. On January 20, members of H*yas for Choice were removed from Healy Circle by Georgetown University Police Department officers just 18 minutes after they had settled in to protest the Cardinal O’Connor Conference on Life outside of their usual Red Square setting.

Student activism also extended beyond the Hilltop, as Georgetown students joined with hundreds of universities around the country to protest the construction of the XL Keystone Pipeline on March 2.

The protesters marched to the White House and zip-tied themselves to the North Lawn fence, sprawling out on a mock plastic oil spill. Of the 10 Georgetown students who participated, three were arrested, including Caroline James (COL ’16), Chloe Lazarus (COL ’16) and Michelle Stearn (SFS ’15). Despite the march’s start on campus, the 10 Georgetown students were few in number among the 1,000 protesters.

Student immigration activists’ voices also rang loudly weeks later when, on April 5, more than 100 Georgetown students marched to the White House as part of a National Day of Action, shouting “Obama, escucha, estamos en lucha,” or “Obama, listen, we are fighting,” to protest the record number of deportations that have occurred under the Obama administration.

Hoyas for Immigrant Rights President Citlalli Alvarez (COL ’16) called the protest a success, praising it for bringing together Georgetown students and the outside community.

“That, for me, signified the success more than anything, the way in which we were able to support that community more,” Alvarez said.