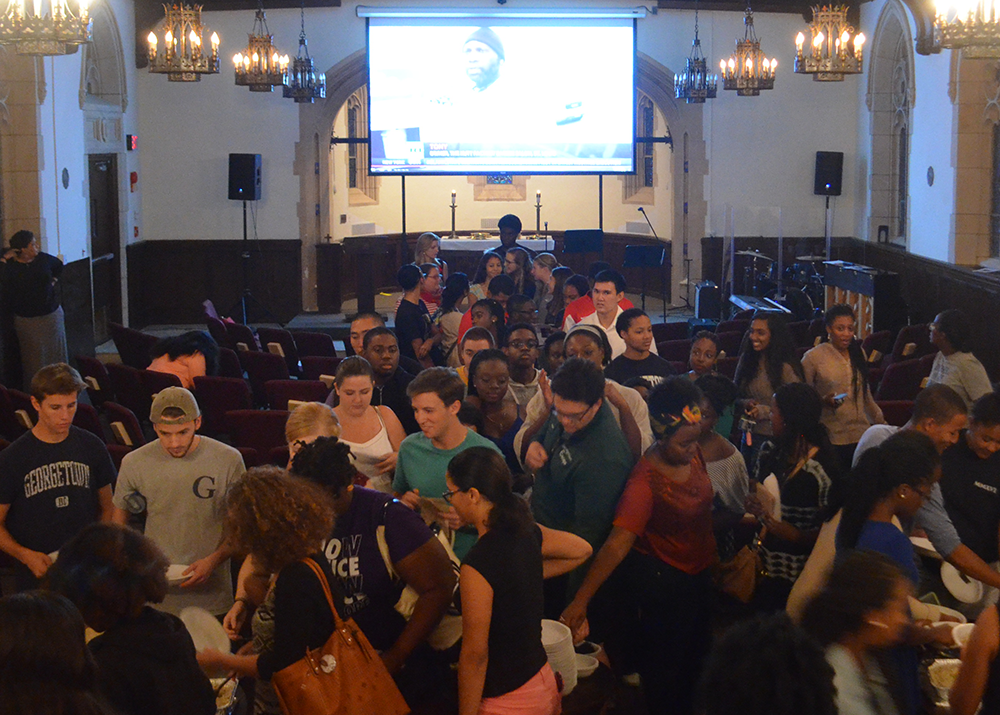 In the first iteration of the Well Talks sponsored by the Protestant Ministry, Georgetown University Brothers for Christ, GU Sisters for Christ and Protestant chaplain Rev. Khristi Adams led a student discussion of the Black Lives Matter social movement.

The Well Talks, which are held the third Sunday of every month, focus on fostering community discussion and healing on contemporary issues in an open-table conversation.

With more than 60 students in attendance, Adams led the dialogue but left most of the commentary to the group.

Adams began the discussion by contextualizing the movements on a national level and defining the platforms of both #BlackLivesMatter and #AllLivesMatter. Over the hour-and-a-half session, student commentary turned internally to Georgetown’s onus to advance a message of inclusion.

Students raised concerns, including a perceived lack of black professors and foreign language professors native to a country where their language is spoken.

Students also ruminated on the naming of the newly renovated Former Jesuit Residence, comprised of both Ryan Hall and Mulledy Hall. Concerns over insensitivity were raised as former University President Rev. Thomas F. Mulledy, S.J., after whom the building was named, had participated in slave trade.

While no specific conclusion was reached during the debate, Protestant Chaplaincy Director Rev. Bryant M. Oskvig spoke to the merit of the Well Talks’ open-table format for learning and exchanging ideas.

“I think that we are a campus that is still trying to figure out where the blue and gray lie,” Oskvig said. “What is great about this discussion is that even if someone is possessing a position that [one student] didn’t necessarily hold, [it is] an opportunity to hear different voices … and I thought it was great that the conversation could really be brought locally.”

Adams said that she wanted the discussion to be a platform for students to openly express their views.

“The best way to show that we care about students’ opinions is to provide a space for them, and a consistent one at that,” Adams said.

Adams also said that the Well Talks were a forum for respectful disagreement, which may not be fostered in digital-centric spaces.

“I see with this generation that the respect and empathy and open-table discussions … are not what I see in social media,” Adams said. “The message that we’re trying to permit is that it’s okay to disagree and to hear each other out no matter where one student falls on one spectrum or another.”

Adams said that she conceptualized the Well Talks after she started a similar program for high school students over the summer.

“There was a space that I had provided for younger high school students this past summer, and [I] wanted to see how we could do that on campus,” Adams said.

Adams collaborated with Coordinator for Ecumenical Christian Life Jordan Blackwell (COL ’15), who lent his familiarity with student dialogue to help organize the Well Talks series around hot-button issues on campus.

Blackwell said that he wanted to approach the sensitive topic through intellectual discussion.

“There has been a lot of talk about racial tensions and [Black Lives Matter],” Blackwell said. “We didn’t want this to be an event where the same people stand up on their soap box and spit emotions.”

While not all Well Talks will be focused on social or racial issues, Blackwell said that the demographic of the Protestant community on campus was influential in determining the topic for the first talk.

“It’s highly minority students, and those are the students that we feel need these spaces,” Blackwell said. “It’s a different experience going throughout Georgetown, and sometimes you can feel alone and that you aren’t able to fully express yourself. We just want to say that here is a space that you can do that.”

Adams said that she hopes the talks will engage students to share their opinions in an open setting.

“Those are Jesuit principles and principles of our ministry here. That’s what we see as being the difference in these types of conversations, and I’m hoping these students took that message away,”