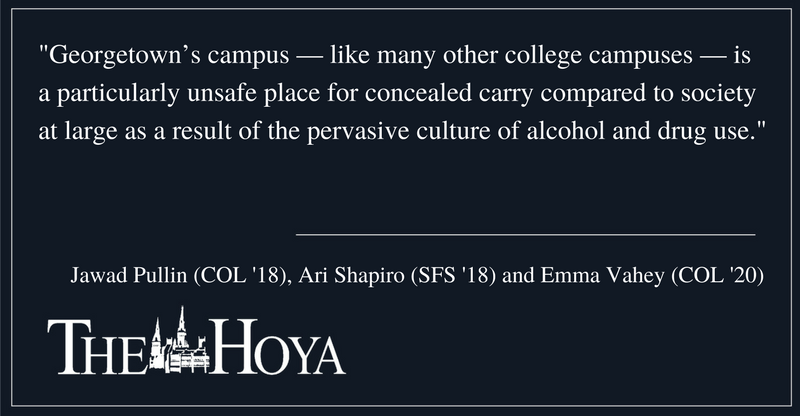 Imagine sitting in a Thursday morning seminar, still bleary-eyed from a late night in Lauinger Library. Suddenly, you catch a glimpse of a .38 Special revolver peeking out from a classmate’s tote bag.

That on-edge feeling — that trepidation — is a sentiment we hope Georgetown University students never need to encounter, let alone the terror and agony that would result from an actual act of violence.

The three of us have witnessed and felt the effects of gun violence: One of us grew up in inner-city Philadelphia; one of us went to high school mere miles from Sandy Hook Elementary, the site of the 2012 shooting in Newtown, Conn.; one of us had friends in the Aurora, Colo. movie theater the night of July 20, 2012, when 12 innocent lives were taken.

In response to our own life experiences and the horror we have seen on the national stage, we stand with the students from the Parkland, Fla. shooting: Enough is enough. We must hold our legislators accountable for the fatalities of gun violence across the United States — 96 people per day, according to the Center for Disease Control and Prevention.

To us — and to many others on this campus and around the nation — no part of the solution includes “campus carry.”

The issue of gun violence stretches far beyond school shootings. While mass shootings spark national conversation, the discussion around gun violence prevention must address the fact that communities of color, young people and victims of domestic violence are more likely to be affected by gun violence.

Black men are 13 times more likely to be shot and killed by a gun than white men, according to Everytown for Gun Safety, a nonprofit that advocates for gun violence prevention.

On an average day, seven kids and teenagers lose their lives to gun violence.

In the United States, 50 women are fatally shot by an intimate partner every month.

While these statistics reflect the United States at large, the threat behind them could easily translate to Georgetown if guns became a permanent presence on our campus.

One of the most troubling aspects of allowing campus police to be armed is the often-contentious relationship between people of color and law enforcement. As communities of color are disproportionately victimized by police brutality across the country, the threat of unjust policing could be amplified on campus by arming officers. It would be naive to assume that such tension between law enforcement and communities of color does not exist here at Georgetown as well, and we should continue to elevate the voices of students of color around these issues.

But even if we did not have to worry about armed Georgetown University Police Department officers, allowing guns on campus would force us to fear our own classmates.

Georgetown’s campus — like many other college campuses — is a particularly unsafe place for concealed carry compared to society at large as a result of the pervasive culture of alcohol and drug use.

The introduction of guns to a college community whose social center involves partying with alcohol and/or drugs would introduce unnecessary and unreasonable risk to campus life. A campus carry policy would allow an intoxicated college student to roam the campus while armed. Although responsible gun owners should never carry while intoxicated, college students are not always known for being responsible, meaning a campus carry policy would be imprudent and ultimately dangerous.

We must also consider mental health issues and suicide rates among college students. Georgetown’s high-stress academic and social scene and inadequate access to on-campus comprehensive mental health providers — along with the fact that suicide is the third-highest cause of death among individuals ages 15 to 24, according to the Georgetown University Student Health Center— means increasing access to guns on Georgetown’s campus would be risky at best and lethal at worst.

Many students on this campus know people who have contemplated taking their own lives while at school: The presence of guns on campus should not be taken lightly, especially considering half of suicides are carried out with firearms, according to the CDC.

As Florence Yared, a Parkland survivor, said, “The right to bear arms … does not and never will overpower the individual’s right to life, liberty and the pursuit of happiness.”

Young people drive action toward the solution for the gun violence that plagues our nation. But that solution in no way includes arming students.