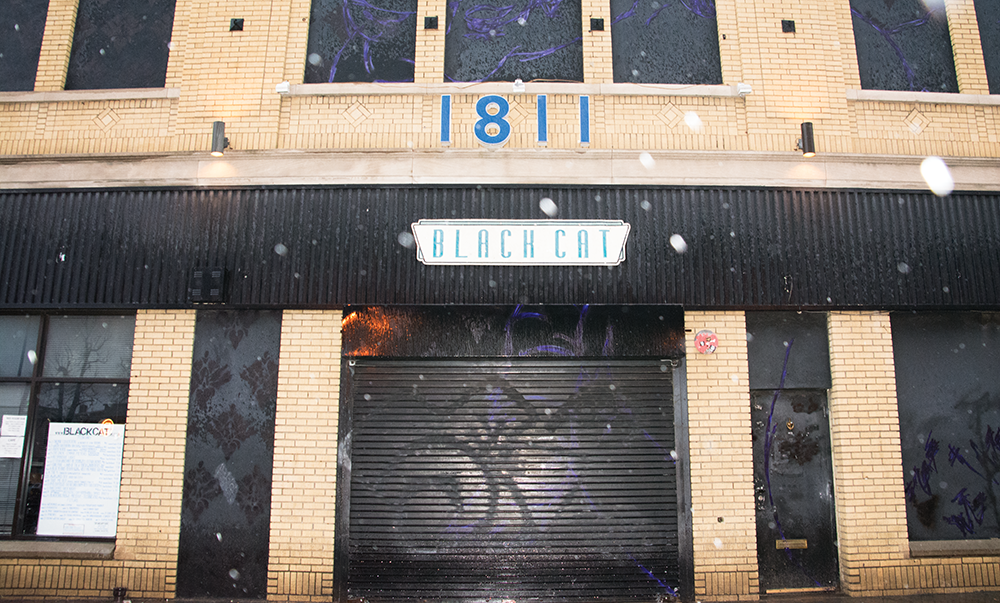 “It felt like things could explode at any moment into absolute chaos.”

James Schneider, director of the upcoming documentary “Punk the Capital,” was not describing a heated protest but rather the influential 1979 punk rock concert held at Georgetown University.

The show was a benefit concert held by Georgetown’s student-run radio station WGTB after the organization was shut down by the university because of the station’s left-wing broadcasts. Beyond the WGTB studio’s walls, Georgetown’s countercultural radio programming was part of a larger punk movement that spread like wildfire across Washington, D.C.

Georgetown’s connection to punk rock stems from WGTB. Rev. Francis Hayden, S.J., founded the radio station in 1946 to broadcast Latin Mass, but over the next 25 years it developed into a prominent left-wing station in D.C.

WGTB played a variety of music, including punk rock on Steve Lorber’s (COL ’76) show “Mystic Eyes” and future keyboardist for punk band The Look Xyra Harper’s program “Revolt into Style” in the mid-’70s. These shows were among the first in the District to broadcast the genre according to Schneider, tying the Georgetown radio station to punk rock’s spread.

“Some of the people who were bound to form influential bands used to go and sneak out of their houses into Harper’s show at two in the morning,” said Schneider in an interview with The Hoya.
Along with punk rock, WGTB was well-known for advertising anti-Vietnam War rallies and contraception, drawing direct condemnation from Vice President Spiro Agnew in 1975.

“There is little will to oppose communism in America anymore, [and] the voice of third-world communism is pervasive in academia. WGTB … broadcasts what seems to be propaganda for the third world,” Agnew told The New York Times Magazine.

“The university was more conservative, and [WGTB] was telling people about rallies, and the priests didn’t like that, so they shut it down,” White said.

The station’s radical political messaging would result in serious consequences for WGTB. Fr. Timothy Healy, S.J., Georgetown’s president from 1976 to 1989, sold the WGTB radio frequency to the University of the District of Columbia in 1979 for a grand total of $1.

Three days later, on Feb. 3, 1979, WGTB hosted a benefit concert in the Hall of Nations, now Walsh Black Box Theater, in a last-ditch attempt to resurrect the now-defunct station. Three rock bands performed that night: The Cramps, The Chumps and the Urban Verbs.

The show perfectly captured the punk ethos, according to Schneider: It was direct, honest and chaotic, filled with sheer energy.

“The place was completely destroyed — kind of anarchy,” Schneider said. “It was sold out, but people like Rob Kennedy from the Chumps were helping to sneak people in.”

The concert’s influence resonated through the nation’s capital. Future punk rock staples such as The Slickee Boys attended the show, while the influential band Bad Brains handed out promotional flyers at the event, according to Schneider.

Audience members, Ian MacKaye, a native of D.C. neighborhood Glover Park, would even go on to start his own record label, Dischord Records, in 1980 and front legendary punk rock bands The Teen Idles, Minor Threat and Fugazi.

Young Punk Pioneers
Off campus, punk was spreading like wildfire through the District. Small shows drummed up support from D.C. youth and created an environment of joyful rebellion and do-it-yourself spirit.

“A lot of people saw what they were doing and thought, ‘I could do that; I can play a few chords and put my heart into it,’” Schneider said.

Punk pioneers like The Slickee Boys operated outside traditional structures such as major record labels and established concert venues. They had to be creative to overcome the barriers presented by their age and inexperience, according to Benjamin Harbert, a professor in the department of performing arts who teaches a course on rock ‘n’ roll history.

“They couldn’t get record deals; they couldn’t even play at the local venues in town, because they weren’t old enough to drink and get in,” Harbert said.

The young musicians relied instead on informal, underground networks they created themselves.

The owners of unconventional venues such as the anarchist collective Madam’s Organ, along with various basements and warehouses, began opening themselves up to punk bands, providing a space for enthusiasts of all ages to attend and enabling the movement to gain momentum.

Even St. Stephen and the Incarnation Episcopal Church in Columbia Heights has welcomed all kinds of musicians to play benefit concerts since the 1970s.

“They generated this network of not only places to play but local scenes, self-produced magazines, audiences and floors to sleep on,” Harbert said.

“D.C. was not an entertainment town, so there was not a thing to model yourself after,” Schneider said. “And that’s why it became an independent, unique scene.”

“There’s a lot of corporate culture here and government and politics,” Janfaza said. “Any time there’s a culture of oppression, there’s a reaction to it.”

The global perspectives of many working in the nation’s capital also helped politicize musicians from the District by increasing their awareness of national and international events, Schneider said.

“It was maybe a more educated class of parents — Working class or government workers or state department parents,” Schneider said. “You had this background reflecting on the world and having a broader perspective than in some scenes.”

Although these influences are all relevant, pinning down the precise reasons for the punk movement’s growth in D.C. is impossible, according to Schneider.

“There’s something very specific and maybe mysterious about each place [where music develops],” Schneider said. “It’s hard to capture, like a work of art. This thing that emerges out of different cities — it’s a sound — it’s hard to put your finger on it always.”

Evolving Ethos
In the modern age, the informal networks that sustained punk rock’s growth are increasingly overshadowed by the internet.

The do-it-yourself ethic of the ’70s and ’80s that favored independent production and distribution of music and rejected corporate sponsorship has become less alluring, according to Schneider.

“With the online capacities that people have, DIY has kind of lost its luster in a way; everybody’s DIY. So that has its positive and negative impacts on the community,” Schneider said.

The modern era has also shifted the goals of punk bands since the ’80s, according to Harbert. Some bands have started to place a higher emphasis on their media presence than on the music itself.

“Nowadays, with the internet, you get bands who have a photo and logo and network on social media before they’ve even written a song,” Harbert said.

Although the spirit of punk rock appears to be shifting, the increased accessibility of music today does allow musicians to reach a wider audience. This gives Michael Poletti (COL ’18), bass player for Panini Girlfriend, optimistic view for the genre’s future.

“Punk will become more popular. Now that it’s all on the internet, it’s so much easier to find,” Poletti said.
Despite the digital proliferation of punk music, Elizabeth Gleyzer (COL ’20), WGTB program director and avid punk fan, still believes live shows are essential to the punk rock experience.

“To appreciate your music, you’d have to physically take your body to the show and hear it,” Gleyzer said.

Although WGTB now broadcasts online only, and the station is no longer an essential fixture in D.C. punk rock, Georgetown’s small but dedicated group of punk fans carries on the spirit of the movement, Gleyzer said.

“I definitely know punk bands on campus and people who are really involved in the scene,” Gleyzer said.
Off campus, the D.C. punk scene remains lively. Mainly sustained by underground house parties, fans can still get their fix at venues such as The Pinch in Columbia Heights and the Black Cat in Cardozo.

Each April, Washington, D.C., also hosts the hardcore punk festival, “Damaged City,” which brings together bands from places like California and Sweden.

Although the future of punk rock in the District is unpredictable, history shows D.C. is a punk town, where the roots of rebellion and counterculture run deep.