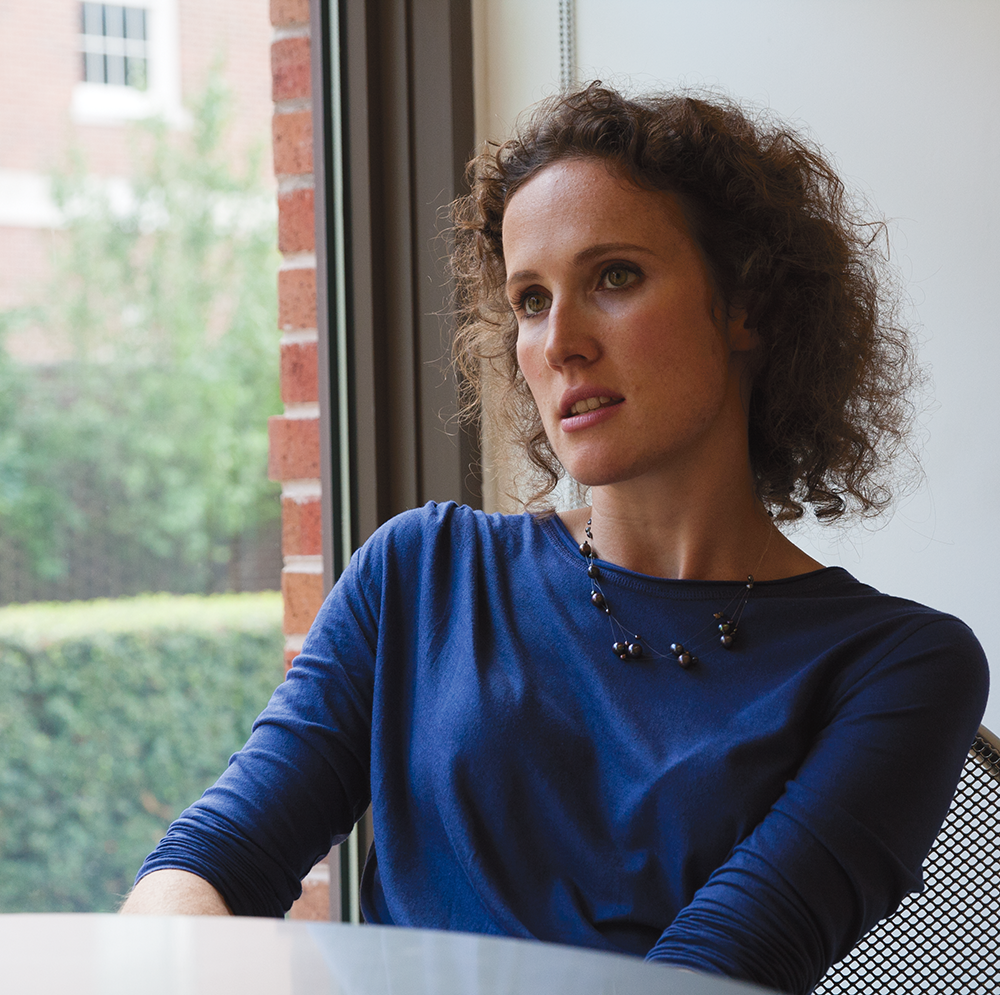 Georgina Paget, a London-based producer, is producing the documentary “Queens of Syria” and the feature film “The Trojan Women,” which evolved from the original play. She read Classics at Oxford, as did her co-producers Charlotte Eagar and William Stirling.

How did you get involved with “Syria: Trojan Women?”

It’s a funny story, actually. I was at a film pitching competition … the year before last and I entered with a completely different project and Charlotte [Eagar] and William [Stirling], who are now my co-producers, entered with this project, and I just thought it sounded like the most amazing idea that I had ever heard.

I had seen that they already had a producer, since they were the writers, but I went up to them afterward and said, “That sounds really interesting and let me know if there’s anything that I can do to be involved or help.” We kind of stayed connected. Well, I basically stalked them and that’s kind of how it started. I just really loved the idea.

I just thought the idea of them using this play for a drama therapy project with a group of refugee women just seemed so perfect, and such a great way to raise awareness on a larger scale of the Syrian refugee crisis, which as much as you feel that it’s in the news a fair amount, it gets relegated to the back pages a lot of the time. And especially working with women as well I thought was a real plus, and actually hearing their stories, because I think the media coverage of the Syrian conflict has been very male and very militaristic, and sometimes for obvious reasons. It’s difficult to report from inside of Syria, but there’s not so much from the women, which is half the population.

How was the Greek play adapted to incorporate the stories of these refugees?

It’s an intricate play, but there are sections of the play where the chorus talk about what their life was like before Troy [lost to] the Greeks. One of the ways that they wove in stories was that some of our cast talk about their previous lives. There were some monologues that were projected onto the screen at the back of the theater, and two women at a time read monologues from the play and talked about characters that they particularly identified with and kind of picked a line from the play and talked about what that meant to them and how that resonated.

A huge part of drama therapy is essentially being in a safe place between the character you’re playing and you, to be able to kind of reference your own experiences … is really helpful, I’m told. We did this other exercise where some of the cast wrote letters to someone who is no longer with them. Somebody wrote a letter to her house, which is kind of cool, to tell her house back in Syria how much she missed it. There were letters to friends, family members who had fled to other parts of the region, like Turkey or Lebanon, or in some cases to people who had died or who they didn’t know where they are, which is quite amazing.
That was kind of interwoven with actual scenes from the play, so it was all one, really playing on the idea of memory witnessing storytelling. Some of the really interesting parts of the play itself … talk about how war is no more, but our story will live on through the ages, which again is kind of a neat parallel.

You used the term “drama therapy.” To what extent is the purpose of this production to inform and entertain the audience, and to what extent is it really for the women who are acting in it?

It’s not one or the other, it’s very much both. Primarily, when we began the project, we didn’t know if the end performance was going to be good or not. It could have been this sort of half-decent school play, you never know. But that wasn’t the focus.
We shot a documentary in hopes that that would be a way of sharing this with a wider audience, even if the play itself was not anything of great artistic value. But in fact, our directors are absolutely wonderful, and the cast were really fantastic and gave a lot of themselves and did a lot of really moving performances. Ultimately, our first concerns were for the women. It was very much that they were in control. They only shared what they wanted to share. The primary purpose was for them, as a drama therapeutic exercise.

How did you interact with a larger community of Syrian refugees and how did that affect the development of the play?

There was certainly a trickle-down effect to that we had to run a daycare center for all of the kids that came with their moms who weren’t in school. A lot of them were very young. The psychologist who was working with the women … also worked with the kids. A lot of them had real behavioral problems and deep traumas as well.

In terms of actually interacting with the community, I suppose the eventual performances were part of that. That wasn’t just the Syrian refugee community … but also Jordanians, people who live alongside Syrian refugees. It’s a very interesting country that people are from all over the region and very few call themselves Jordanians. I didn’t meet someone who called himself a Jordanian for about a week and a half when I first went there.

It was quite hard-hitting for a lot of Jordanians to listen to these experiences of people are living right with them. Ultimately, it is very hard to emphathize with someone if you don’t understand.

The [women] really, really want to show what’s going on, because they feel like they’re being ignored, whether that’s kind of on purpose or by accident. I just remember thinking, how awful it would be and all these things happened to me and essentially no one cared and no one was listening.

The production will be coming to the West this fall in Switzerland. Do you anticipate that it will be received differently in the West than it has been in the Middle East?

I guess it will be received differently by every different audience who watch[es] it, but I think what will be a common thread, and certainly you could feel it in the theater in Amman, was just quite how moving it was to watch these women play characters who weren’t them, but also play themselves and to actually share things that were so deeply personal. The impact is really hard to describe.

I watched the play, and I don’t speak really any Arabic. I had the program notes and I knew the play and I knew what they were saying roughly, but I watched that without subtitles and no translation, and I just found it incredibly moving and very powerful. I think what comes across is the emotion and the feelings of loss and displacement and frustrations around that.

It will be interesting to see how it’s received in the West. I think in the Middle East, perhaps people are a lot more aware on one level, if you see me, not exactly the exact stories of what’s going on, but I don’t think it will be such a shock or a surprise as it might be for certain audiences in the West, depending on how informed they are. I guess you only read as much news as printed, so it will depend on where they live and what is available as to how much they know about what’s going on.