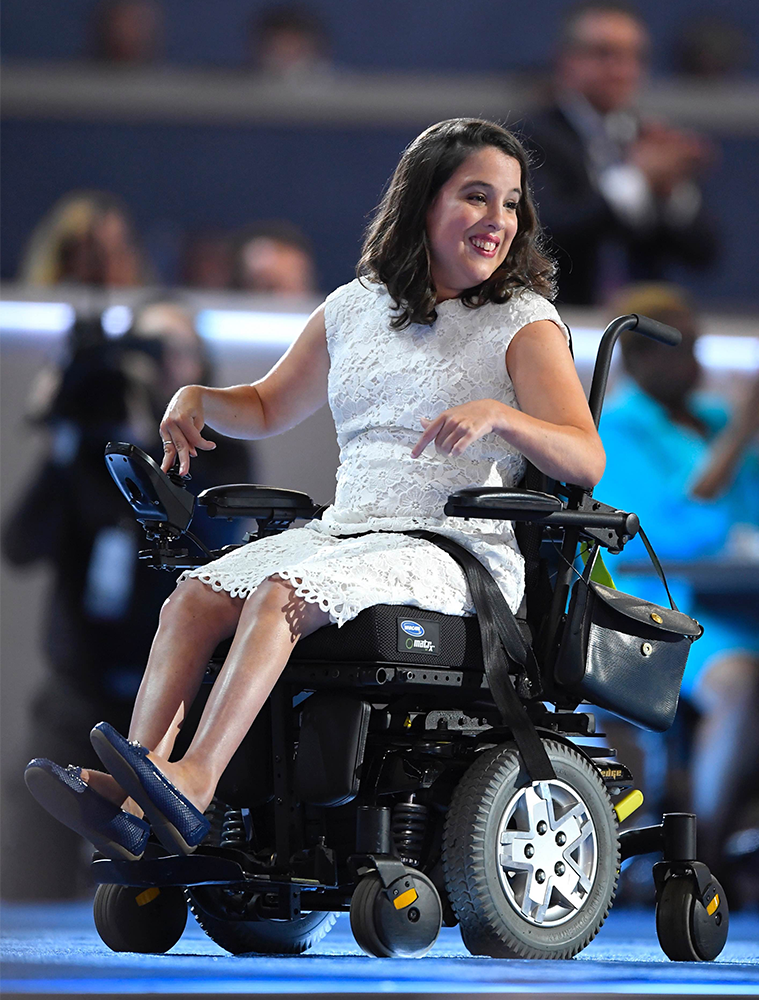 When Anastasia Somoza (COL ’07) addressed the Democratic National Convention in July, she delivered a powerful endorsement of presidential nominee and former Secretary of State Hillary Clinton from her motorized chair. Born with cerebral palsy with spastic quadriplegia, the New York-based disability rights advocate now serves as a surrogate for the Clinton campaign after graduating from Georgetown College with a major in government and a minor in English. In an interview with The Hoya, Somoza reflects on the vitriolic election cycle, advances in disability activism and her own years at Georgetown.

Your address at the DNC was both a testament to the inclusivity of the Clinton campaign and a searing indictment of Trump’s divisiveness. You said at one point Trump “didn’t see me, didn’t hear me and definitely did not speak for me.” In a campaign characterized by nasty remarks and mudslinging on both sides, how did you draw this distinction?

Donald Trump has made it clear through all of his rhetoric that he doesn’t represent, will not fight for and is fearful of women, African Americans, Muslims, people with disabilities and other religious and ethnic minorities – in other words anyone who isn’t the all-American white male. It’s impossible to even attempt to claim to be the best candidate to address the most pressing needs of Americans and our interests when your core policy proposals are centered on deporting all immigrants and building a wall. Not to mention the fact Republican administrations are characterized by limiting government and, more often than not, the cuts are made in the areas of greatest need, including reducing funding to Medicaid and Medicare, both of which are relied upon by the disabled and elderly nationwide. By contrast, Hillary began her career at the Children’s Defense Fund fighting for the needs of families who have children with disabilities, working to increase the numbers of African Americans and other minorities registering to vote, advocating for women’s rights to be seen as human rights and fighting against all odds to make sure health care is a right for all Americans rather than a privilege afforded to some.

To cite a breaking example of the stark differences between the campaigns and candidates, Hillary has just announced her comprehensive agenda on mental health, which demonstrates her action toward addressing an unmet need. As far as I know, Donald Trump has yet to address this in any substantive way.

You came to the national spotlight when you plead with President Bill Clinton in a televised town hall at age 10 to place students like your twin sister Alba in regular classes away from a special education track. Over a decade later, how do you think policies for disabled students in the classroom have fared?

Families across this country are still waging battles at the school district level to make sure their children are included in mainstream classrooms and then, once they are, that they are given the appropriate support and access to accommodations, which can sometimes include assistive technology and individualized adjustments to their academic program. So the work to level the playing field in the classroom is far from over, but beyond that, as a young woman with a disability, I have struggled in the transition from academia into the work force. I am working on increasing the employment of people with disabilities in private industry through tax incentive programs and creating guidelines for a more inclusive workforce.

How can we best be allies to the disabled community?

In your daily lives, one of the important ways everyone can be an ally to those of us with disabilities is being inclusive of us in all school-related activities, groups and programs. If you notice an elevator on campus or a D.C. Metro station that is out of service, take the time to make the call to get it fixed.

Overall, how would you characterize your experience at Georgetown?

While at Georgetown I felt extremely supported by faculty and staff. What I remember sometimes being an issue was the frequency with which elevators on campus would break down and other physical accessibility-related issues, which from what I’ve heard have improved drastically over the years.

The Class of 2020 begins its freshman year this fall. What advice do you have for incoming students?

My advice to incoming freshmen would be to take every opportunity to meet people and discover ways in which you can become actively involved in campus life and really engage in activities that you are passionate about. As far as academics are concerned, it’s important to make the most of the time you have at the beginning of each academic term to sit in on classes and engage in conversations with professors about the content of the course and how the professor will determine your progress throughout the semester. For example, in my case I knew I was more comfortable writing papers than I was taking multiple choice exams. So to the extent that it’s possible, choose classes that fit your learning style and provide you with opportunities to highlight your strengths. Also, even if you think you’re confident about what you’d like to major and minor in, be sure to allow yourself the time and space to explore a variety of academic disciplines.

What are your plans for the months before the election and beyond?

I’m a believer in living in the moment, so I don’t have a five- or 10-year plan, but between now and the election I am honored and excited to be speaking as a surrogate on the campaign trail in support of Hillary. I’m also looking forward to a handful of speaking engagements this fall, including one that’s bringing me back to the Hilltop at the end of October. There are many thrilling projects and opportunities in the works that I hope to be able to elaborate on at a later date.