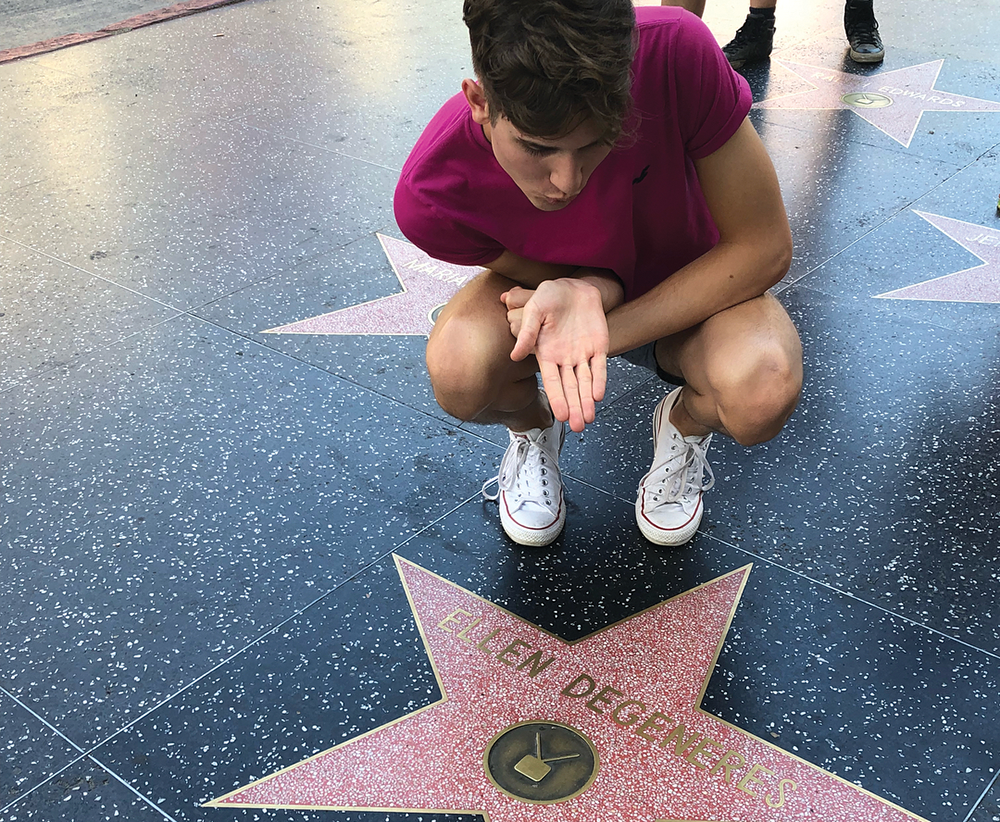 Seth Owen (SFS ’22) appeared on The Ellen DeGeneres Show on Sept. 11 after gaining national attention in July when a fundraiser for his Georgetown tuition after he was kicked out of his house for refusing to attend his parents’ church went viral.

After Owen, who is gay, refused to attend his parents’ church in Jacksonville, Fla., due to the church’s anti-gay messaging. Owen’s biology teacher, Jane Martin, started a GoFundMe fundraiser to raise money for his Georgetown education. The campaign ultimately raised more than $140,000.

Cheerios teamed up with the Ellen Show to give Owen $25,000 to start a scholarship to help other students facing adverse conditions pay their college tuitions.

In an interview with The Hoya, Owen discussed his experience on the show, as well as reflections on adjusting to college life after his story was picked up by multiple news agencies.

How did you get to be on the Ellen Show?

They picked up my story because it went viral. I’m sitting down one day and I get a call from Burbank, California. And I thought, “Oh, this is odd.” So, I answer the phone, and the guy said, “This is Alex from The Ellen Show.” And I said, “Excuse me, did you just say The Ellen Show as in Ellen DeGeneres?” And he goes, “Yes.” So, I’m like, “Can you give me a moment because I’m in tears.” I just interviewed with him, then I interviewed with the producers. It was wild that we were setting up the date for the show.

What was it like to meet someone that you spent so much time looking up to?

The most shocking part was that we spent time, a lot of time, hugging when I first walked out. One of the producers warned me. He was like, “Don’t sit there and acknowledge it. Just walk out there straight to Ellen.” Because, while on stage, I am using my time that we could be talking. I was really impressed that she spent so much time giving me a hug that was eating up our stage time. It really, really meant a lot to me. I felt extremely loved and supported when she was giving me that really nice, long hug. They only showed, like, half of it when they aired the show. She gives the best hugs. She smells amazing. Her perfume is, like, perfectly selected. Her eyes are extremely blue. Absolutely gorgeous. It’s very easy to talk to her, too.

What was your reaction when Ellen gave you $25,000 to kick start this scholarship?

What do you mean by “start the scholarship”?

I’m actually in contact with some lawyers in Jacksonville who are starting nonprofits. We are in the process of starting a nonprofit organization to run the scholarship fund for kids in similar situations, but not limited to the LGBTQ+ community. We are looking for people who show a capacity for resiliency and are putting in a lot of hard work, but just need a little extra help to make it to their dream school. Whether that’s a four-year college, a community college, or a career and technical education school.

How did you get the idea to make that fund?

I wanted to do it when the GoFundMe really started soaring. I wanted to take the extra money and put it towards a scholarship. Some of my mentors were very encouraging to the idea and reminded me of my privilege as a white student that I received. I received extra help that students of color would not have received. I feel that it is my obligation to give back and make it more equitable.

What do you hope people can learn from your experience?

For kids in similar situations, my message — I would have to quote Mrs. Brown in her TED Talk and the power of vulnerability, when she said, “Tell the story of who you are with your whole heart, and that what makes you vulnerable makes you beautiful.” I think that it could potentially help another kid to just be comfortable in who they are and not conform to the pressure around them.

What has it been like for you, transitioning to college, and having your personal experience be broadcasted in such a public way?

How do you feel about it now, personally?

I do not regret it. I am extremely glad that I was able to help at least one kid. I’ve had many students reach out to me, saying that they are going through something similar and appreciated my courage in telling my story and that it helped inspire them and helped them through. I’ve even had family members reach out to me and say that they drew strength off of my willingness to share. I think that, however few or however many people benefitted from it, it was worth it.