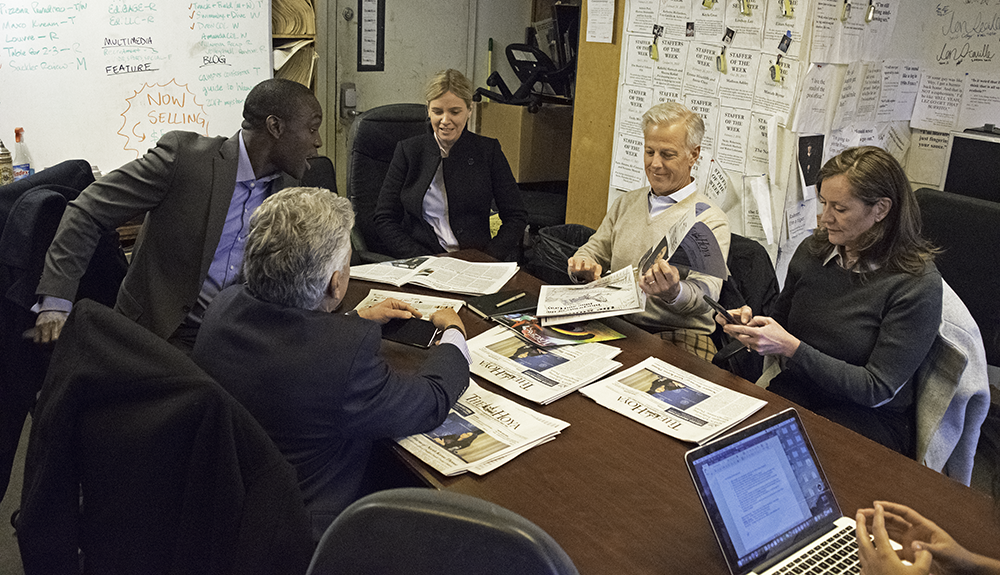 The Georgetown Institute of Politics and Public Service’s fifth class of fellows brings a diverse range of political perspectives from both major political parties and a variety of fields, including communications, political fundraising and journalism.

In an interview with The Hoya, the fellows discussed their goals for democracy and civic engagement among Georgetown students and millennial Americans.

Elshami: To learn from the students here and to kind of get re-energized about the future, I am going to offer a clear assessment of how Congress works — all the bad, all the ugly, and get from the students how it could be improved. That’s what I hope, to engage them in that sense.

Law: We tend to take the existence of democracy for granted. We think it’s the way things have always been, and in reality, our country is a rare experiment in all of human history. I think people have a sense that democracy is not doing well. My hope is to explore that with students — why there is a sense of unease, and why democratic institutions are not functioning as well as they could.

Shields: I’m focusing really on presidential elections and national elections and what those look like in a changing environment. In terms of how technology interfaces in campaigns and how people are connecting with voters, I hope to really look at how we can see what’s different from previous elections, but then also look at what 2020 might look like, or what 2024 might look like.

Scott: I would like to just hear how millennials feel that their world is being misrepresented in the media and what people don’t understand outside their bubble. I don’t think people realize that millennials include freshmen in college right now and people who have been married for a decade and have four kids, in Missouri or New York. I think we really have to do a better job of diversifying our understanding of groups and communities and different political tribes.

In each of your fields, with focuses ranging from civil action to political discourse, how do you encourage young people to stay motivated and active in the role of citizenship?

McAuliffe: One of the things I want to talk about is encouraging and starting conversations about civic engagement at a much younger age. A lot of times it doesn’t happen until you’re eligible to vote at age 18. Many high schools don’t require a government class or a U.S. history class. I want every young person in this country to feel like getting that voter ID card is as exciting as getting your driver’s license.

Law: What I think has happened in politics is what happened in professional sports. You spend all your time yelling at the TV and let other people do all the work for you. The truth of the matter is politics and democracy require some work; it requires some buy-in. If you do nothing else, you read your newspaper, you try to educate yourself, you try to talk to people who aren’t like you and get their perspective.

Scott: In the last year or so, we’ve seen millennials start hashtags that force candidates to address issues that need to be talked about. They can write op-eds — activism we’ve just seen across the board. I think that is really important, because we are seeing a lot of 20-year-olds say, “My voice doesn’t matter — they’re going to do what they want to do anyway.”

What does it mean to be a citizen for you? How do you use your citizenship?

McAuliffe: Even in my generation, in my personal life, it is easy within a social group with friends to bring something up from today’s news and say, “I don’t want to talk about that, it’s exhausting.” We have to force those conversations in our daily lives even with those who don’t want to have them. In public education, that’s why I think it’s so important to have civics, to have history, so we have those debates and have discourse in a way that’s respectful and civil.

Scott: I am obviously a huge supporter of the free press. I realize just how important it is and how rare it is. One of the ways I try to model my citizenship is just magnifying issues in media that just don’t get covered very often, especially by the mainstream media. I started in alternative media, and I’m a huge supporter of student media and faith-based media and identity-based media and partisan media, because I think we see issues from all of these outlets that aren’t happening in mainstream newspapers and leading cable networks.

In all of your fields, you each have become experts in communication. How have you learned to master the art of language, and how do you think language’s role has shifted throughout the years in the political atmosphere?

McAuliffe: The coarseness of language, the difference of acceptable terms and just the generational shift in language and appropriate language sets the tone on if we’re really going to have a meeting of the minds, because you’re halted by some of the language. We’re seeing that play out on the national stage in politics. There’s just been a denigration of respect with some of the language that’s tossed out, and with social media and the internet, you have such amplification.

On the positive side, the move in language has been around storytelling — just understanding the real-life story of who our politics and policies are working toward or trying to impact. We can tell these stories and find everyday Americans and really just amplify what they’re going through.

Shields: People’s attention span is about 30 seconds. If you can’t get to someone in 30 seconds, you’ve lost them. What I found so much when I interacted with voters, [when I encouraged them] to learn more about the issue, I deem that a success. I think so many people in this country have such a top-level understanding of issues, and if they spent more time looking at why we’ve arrived at where we are, then I normally find the better educated you are, the more reasonable you are about a situation.

What brought you to Georgetown and to the GU Politics Fellows program?

Shields: I worked at the [Republican National Committee] when Mo [Elleithee, executive director of GU Politics,] was at the [Democratic National Committee], and so we had an opportunity to work together on some projects. There are a lot of things the RNC and DNC work together on that people don’t realize, like conventions and debates, et cetera. Mo approached me, and I just think the world of him, and the program he built here at Georgetown is unbelievable.

Elshami: Mo and I crossed paths in Democratic politics. I was working for speaker and leader Pelosi, I was working at the DNC. We’ve known each other for a while, so after I retired from Congress — and I admit, I didn’t know much about [GU Politics] — but the McCourt School is something I became very interested in and learned quite a bit about and brought me back into politics just really two weeks after I left.

Scott: I was a guest at a discussion group for another GU Politics fellow, and remember thinking, “This is awesome.” I am enough of a nerd where I want to be on campus and talking to people, and I think all of us do work that impacts young people and includes young people, but we’re not as knowledgeable about 20-year-old life as we think we are, and it would be really good just to talk to students to figure out how they’re processing politics and policy.

McAuliffe: I go back with Mo on my husband’s campaign in ’09, and then through other campaigns. And I love the model of this program: I love working with young people, I love talking about politics. Politics is policy, and that’s something I’m passionate about. And I just think it’s a wonderful personal opportunity for me to engage with young people and to think together how to move the country forward, working together across party lines to find a common ground.

Law: For me, I didn’t know Mo before this, but I did know previous fellow Mike Dubke, who called me and asked me if I’d be interested. I’ve been involved in politics and public life for about three decades, and I thought, “What a great time to process what’s going on and what perceptions of students are and have a conversation about it with some of the smartest students in the whole country.”