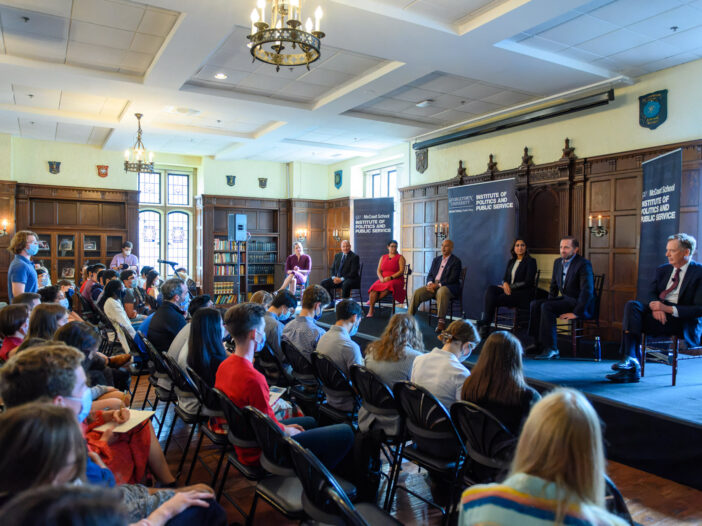 As the Georgetown Institute of Politics and Public Service fellows prepare to launch the first in-person discussion groups in over a year, the cohort sat down with The Hoya to discuss their goals for the upcoming semester.

The group marks the 13th class of fellows to come to the Hilltop. Launched in 2015, the fellows program brings influential political figures to campus to exchange ideas and analysis with students. Fellows host weekly discussion groups focused on current political issues as well as office hours with students, held in person for the first time since spring 2020.

Could you tell us briefly what your plans are for your discussion groups and what you hope students can take away from them?

Clymer: I’m doing advocacy communications for the semester, and what I really want to do is make a space where folks can talk honestly about really tough topics, especially as they relate to advocacy. So for example, we’ll be doing a whole discussion on LGBTQ rights, specifically trans rights. We’ll be doing one on police brutality and white supremacy, the defund the police conversation. We’ll be doing one on how to talk to media to pursue your advocacy goals. But beyond that, it would be really great to have a philosophical discussion on things that folks generally avoid talking about in polite company.

Nawaz: I’m focusing on representation in halls of power and focusing mostly on media. A lot of the conversations we are gonna have are going to focus on who’s at the table, who’s in the room, you know, whose voices are elevated and whose aren’t and how those decisions are made and then also how that impacts what stories get told — so specific to political journalism, the impact it has on the politics that affect all of us in our everyday lives and connecting the media to the politics but really through a lens of power and who’s at the table.

Lighthizer: It’ll surprise you to know that I’m going to talk about trade — international trade specifically — and what kind of a trade policy we should have in the United States and what our objectives should be, and then I want to talk about it in specific discussion groups as it relates to specific countries … So, I mean, those are the issues, the major international trade issues and how we ought to be rethinking about them.

Stelter: My program on CNN is about media, about what’s right and what’s wrong in the media, so my discussion groups are going to be called “Press and Propaganda: Real News, Fake News and Everything in Between.” And I’m really interested in the “in between” part of that. There’s a wide spectrum of news coverage in the U.S. and some of it is prestige, high-quality, fact-checked, rigorous stuff, and then there’s obviously trash and truly fake news and nonsense out there. There’s a lot in between, and so there’s a wide range to talk about, I think, when it comes to what is the role of the press corps? What is the role of the press corps in responding to outright propaganda, and how do we know what’s in between? And I’m hoping to do that in a constructive way, not a destructive way. So much media criticism these days is destructive; it is designed to sow doubt and disturb distrust and sow hatred of the media. What’s much more valuable is to be constructive and talk about ways to fix what’s broken, so that’s what I hope to do.

Pearcey: I will be talking about the nexus between political campaigns and the policies the candidates put forward but how those policies actually get into government offices and then enacted into law. Beyond that, we will talk about some of the political movements over the last 20 years, not going as back as civil rights, but maybe Occupy Wall Street or — I forget some of the other ones that are maybe on there — but so it will be more of a campaign-side view of what goes on, on the political end.

Cooper: I am going to be focusing on different reforms that can help government possibly perform better or could also negatively impact it. I think that the students here at Georgetown are going to be the ones over the next 10 or 20 years who are determining what and how government operates, and what I’m excited to do is to learn their thoughts on the positives and negatives of certain reforms, like increasing the size of the House, adding states to the country, ending the filibuster, adding seats to the Supreme Court and other reforms like that — and really explore and help them understand and help myself understand how some of these could help politics and public service work better for Americans.

What advice would you give from your career experience to a Georgetown student participating in your programming?

Clymer: My biggest piece of advice hands down is make sure you develop your relationships both personally and professionally. Personally, you should have a support network that you can go back to on really tough days, friends and family that you take care of and that take care of you. Professionally, talk to as many people as you can, learning more about who is in your industry, who is in your general professional world and learning how to work with them toward the goals you have.

Nawaz: I tell young journalists that the one thing you have to maintain is your curiosity. The moment you’ve made up your mind about the things you cover, you should stop covering that issue. That’s specific to journalists. The best piece of advice I ever got early in my career was the two things you control and you can never lose and once you’ve lost either of them you’re done are your reputation and relationships. That’s regardless of whatever field you go into. You build those the moment you start working with your classmates, start working on projects together, have your first internship. Those will stay with you every step of the way throughout your career.

Stelter: You know when you see those scrums at a press conference, where there’s 40 reporters there all trying to get the same soundbyte? We all have to do that assignment someday, sometimes we all have to do that job. But it’s not very satisfying; you’re not going to get anything original in that scrum of 100 cameras. In fact, you’re probably just going to get trampled. It’s so much more interesting to be the one person across campus doing something entirely different from what that scrum is doing. It’s so much more satisfying to figure out what is going to be news a month from now rather than following up on what was news yesterday. It’s that mindset of figuring out what you can break or what is going to be news as opposed to what everyone else is doing. That’s one of the only ways to stand out in the profession — to try and figure out what the next story is, not just following up on what everyone else is doing.

Pearcey: I actually think that when people come and ask me how I got to where I am, they’re looking for a very linear answer, that it is, “You do this, then you do that, then you go here.” I think in politics, it’s really a “choose your own adventure.” You can get to wherever you want to go, you just have to make decisions and keep moving forward and not get too hung up on “What’s my next move?” I like to ask people, “What do you want to learn next? What do you want to be doing next?” Then, if you’re still pressing me for the next move, it’s about two steps from now but not a massive 10-year plan where you plan the next presidential race. It’s about what you want to learn, what you want to be doing, and then figuring it out.

Cooper: You can have a lot of bad jobs. Every job doesn’t have to be perfect. And you don’t have to settle on exactly what you’re going to be for the rest of your life the second you enter your career. I think relationships and knowledge are your power in this industry. Being smart about the issues and the process and the people involved will help you move ahead. And sometimes it’s not necessarily having the knowledge but being the quickest one to attain it. Things move rapidly in politics, and you need to be flexible and you need to have a thick skin and you need to be able to move fast. And if you can think through problems with those attributes in mind, you’ll do okay.

American political discourse can be very polar. How do you plan to facilitate dialogue with students from across the political spectrum?

Clymer: I would love to emphasize to students to get back to facts — not compelling opinions, not things that sound good in your head or sound good when someone says them compellingly, but actual numbers, figures, things that make sense. You can have someone who’s really smart and makes a compelling case, but it’s not based on much. I think we see that a lot now in politics, across the spectrum, and certainly with progressives. I’ve seen progressives say some things that were completely dead wrong, but they said it in compelling ways, and people love it. That doesn’t help with discourse at all. We really need to get back to adult conversations with facts and evidence.

Nawaz: Facts, not feelings. There is sort of an assumption of good faith. If you are here and participating in these conversations, I will assume you’re here with good intentions and you want to learn and you have some basic level of curiosity and you think you might be wrong about some things. Those are all really good starting points to have a thoughtful discussion. That’s the way I practice journalism most of the time, but it’s key to these discussions too. It’s an intention of good faith; we think you’re here because you want to learn, and we’re going to learn with you, and we don’t have all the answers. At all of the discussion groups, we have questions we want answers to that we hope will come in the discussion groups.

Stelter: Yes, there are students of all ages, but we’re talking largely about young people. And young people should recognize they have more in common than they have apart. There’s a lot to fix. It’s going to fall on the shoulders of young people whether they vote one way or another. I hope that’s a common ground to find here.
Cooper: My discussion groups are going to be about issues that are complex and don’t have an easy answer and that there are positives and negatives on both sides of the equation. The students will have to evaluate those for themselves and for the larger political context. I don’t see there being much friction in that, but I may be surprised.