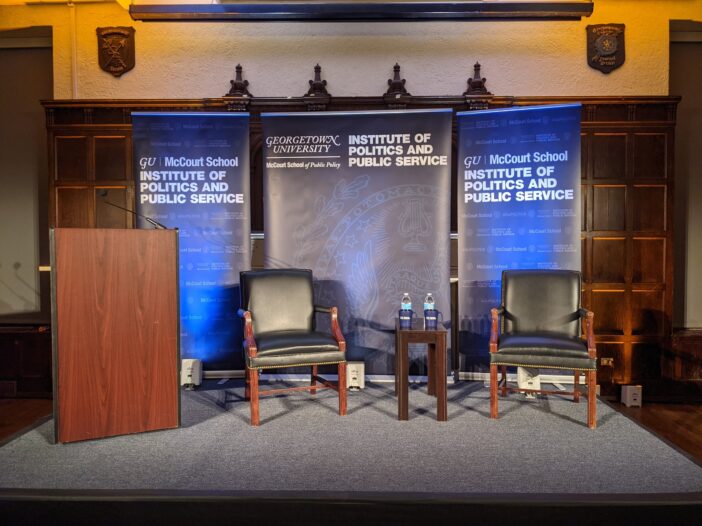 The Georgetown Institute of Politics and Public Service (GU Politics) fellows for the spring 2022 semester sat down with The Hoya to discuss what they hope to talk about with students as well as how they plan to strengthen democratic ideals through dialogue in their discussion groups.

Question 1: What is the most important topic that each of you hope to cover in your discussion group, and why that topic?

Griffin: Threats to democracy. I think that we’ve seen them more recently from the right — my party, I’m a Republican — they exist on the left as well, and I think our country hasn’t had to grapple with the notion that this great American experiment is in fact an experiment and something that we’re not promised.

Linzer: My topic is actually trust and government, so what we’re really going to focus on in almost every possible way is the erosion of trust and government and trying to understand what that’s about and how to turn that around. I think participation from students and people really thinking together is what I’m hoping will get us there.

Lowery: My topic is going to be about the institution of media specifically, and I think one of the things I’m interested in is talking to students about their media consumption habits. I think so much of what we’ve done in our industry has been based off of what people inside of our industry think readers and viewers want, with often not much actual consideration of how people are consuming and receiving news today.

Williams: Jan. 6, for a big reason, because it’s playing out in real time, with Congress investigating the events. Also, the fact that this attack on democracy, literally and figuratively, the response to it has become so partisan, is something we need to explore and pick apart and understand.

Anderson: One thing I’m excited to tackle with my group that I think is really important is the way that listening plays a role in political communication. A lot of the time there are folks that want to get their message right. They sort of miss that old adage that you have two ears and one mouth, and you should use them in appropriate proportion. There’s a lot of talking that happens in politics but not a lot of listening, and I want to think through with the students, “How is listening a prerequisite for smart political communication?”

Etienne: My discussion group is going to be discussing the use of power. I’ve had the benefit and the privilege of having a front row seat and watching these really transformative political figures — from Obama to Pelosi to Harris — negotiate the politics of power at the most powerful seats in the world. We’re going to take an examination and a look at how some of the political figures have done it, and then more importantly how it’s being exercised across different industries to discuss the status quo, transform our nation and have a lasting impact.

Question 2: Given increased polarization in the aftermath of Jan. 6, how will you plan to use your discussion groups to promote and strengthen democratic ideals?

Anderson: I want to cover what role should political leaders play when it comes to, “Do I listen to what my voters are telling me or not?” If you are a Republican member of Congress on Jan. 6 and your constituents wanted you to vote against certifying the election results, but you knew in your heart of hearts that you should certify them, how do you resolve that tension?

Griffin: One is tackling polarization and leading by example, being a conservative on a left of center campus and saying, “I want to hear from as many viewpoints as possible.” Secondly, something I will tackle as part of my discussion group is the role that adversary propaganda and disinformation has played in tearing at our institutions and chipping away at our democracy.

Williams: When we talk about how people consume news and information and some of the problems therein, I don’t think that this is a function of one newspaper or television outlet or words placed in an article or a headline in a certain way. It’s your uncle on Facebook and the manner in which people for years have been able to only select the places where they gather information. I don’t necessarily think that Jan. 6 was a triggering event but a symptom and an extreme example of something toxic that started years before.

Linzer: I can’t imagine anything that’s more indicative of a lack of trust in government than what we saw on that day. I think it’s important for all Americans, but I think there’s a personal experience for Georgetown students having been a part of this city and the capital in this period. I do hope that it comes up often in the discussions and in interesting ways.

Lowery: I think that from a media perspective this raises a discourse of questions that have existed. We live in a moment where the most elite media organizations are organizations that have constructed a system that requires them to brand themselves neutrally. Should the Washington Post and the New York Times be neutral on the concept of democracy? Suddenly these questions of values and ethics become several steps more complicated. Jan. 6 is an easy thing to grapple with. What we do tomorrow, how we cover the voting rights legislation, is much more complicated. I think that having those sorts of conversations is really important.

Question 3: What would you say is the most important thing young people can do to promote democracy given the recent political climate?

Anderson: I’m a big advocate of things like high school debate programs and anything that puts people in an environment where they’re pushed outside their comfort zone. Being courageous enough to be in a place with people who think differently than you is important, and I think that if more people did that, our democracy would be healthier today.

Griffin: As often as you can, have conversations with people on the other side of the aisle, not even necessarily to change your viewpoint but just to try to better understand theirs and understand that your learned experience brought you to certain conclusions, but somebody is not a bad person because their experience brought them to different political conclusions. Get out of your echo chambers, talk to people you disagree with.

Etienne: Political engagement and activity should not just happen around elections. Young people need to stay engaged. Having been in those buildings and those rooms, you get nothing without pressure. I think as young people, I think you have to figure out, “How do you continue to leverage your voice, your power, your influence to hold your elected officials accountable and to get what you want out of the deal?”
Linzer: The U.S. citizenship test has a question: “How does one participate in a democracy?” It’s a multiple choice answer for a new citizen, and one of the correct answers is write a letter to your newspaper. I love it so much.