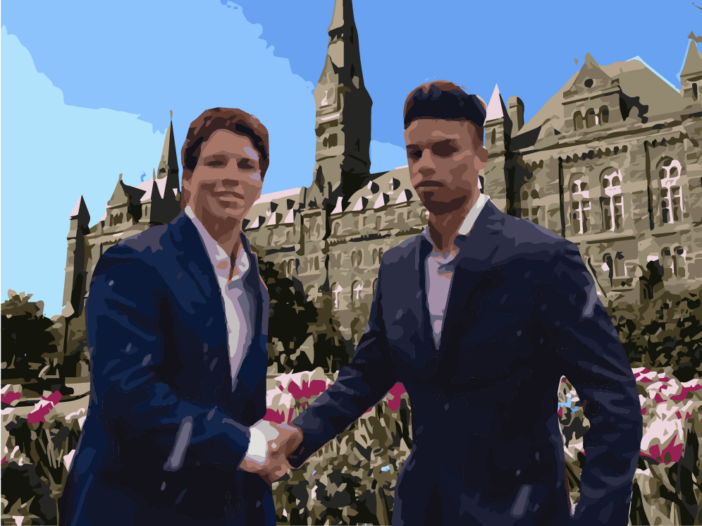 Students elected Wolfe and Ume-Ukeje to office in February 2022 amid allegations that the pair committed campaign violations, including bribing students with alcohol for votes, which Wolfe and Ume-Ukeje denied and a GUSA investigative committee could not confirm.

The Hoya sat down with Wolfe and Ume-Ukeje on Oct. 19 to discuss how they overcame difficulties, including the aftermath of these allegations, their administration’s journey so far and how the two have worked alongside members of the GUSA Senate and Executive to serve students.

What was it like adjusting to GUSA given that neither of you had prior experience with the organization?

Wolfe: It was a lot of us having to educate ourselves on what was going on and what we really needed to do. Building out our staff took a little bit of time, just in terms of that outreach, and I think one of the things that we really prioritized was keeping people from the previous administration involved, especially in terms of some of the advocacy work they were doing. I think a lot of the reason why we were elected in the first place isn’t because GUSA doesn’t do great things, it’s just because people really are unaware of them, and I think we too were also unaware of it.

Ume-Ukeje: We already had a lot of people who were skeptical about our office appointment. We definitely felt the special need to really try to educate ourselves as much as possible. We wanted to spend the time speaking with different groups and different people who run different areas of campus and making sure that we were at least doing our part to represent students in the best way possible as a sign of commitment to not only this office, but also to the people who elected us and even to the people who didn’t elect us because we will really do feel like we want to be representative not just for the people who voted for us.

How have you listened to the demands of students, and do you feel you have been able to represent them?

Ume-Ukeje: I think a lot of what we realized was that our position doesn’t necessarily always grant us direct power to get things done. So that was a little bit of a challenge, and it caused us to need to work with the administrators a lot more.

Wolfe: There was so much sensationalist commentary surrounding our election or our ascendancy into this position, but at the end of the day, it really is just student government. The most we can do is ask the administration to do something or pressure them to do something or work with them to get something done, because at the end of the day, they control the funding and they control the policy that they want to implement on this campus.

What has been your administration’s biggest accomplishment? What was the biggest challenge you faced in accomplishing this, and how did you overcome it?

Wolfe: I’d probably say the biggest thing that we’ve done is the changes that have been made to Epicurean, expanding to meal exchange and going back to its original pre-COVID hours. A lot of conversations that we would have with students always circled back to the lack of available dining options on campus, especially late at night and during breaks when a lot of students who are on vacation and are dependent on the meal plan couldn’t get access to meals. There was a general lack of trust in the community and an expectation that we intended to disenfranchise people or that we had some sort of ulterior motive or agenda in running for this position, and I think the biggest challenge has been slowly trying to overcome that and show people that we really care about what we’re doing.

In April, following a decision by the GUSA Senate to reject holding another student referendum to restructure GUSA, you said that you are still committed to the goal of restructuring. How have you made progress on that goal this fall?

Wolfe: I think a lot of the reasons why we pursued the second referendum was because we thought that GUSA was functioning inefficiently. But I think in the most current iteration of the senate, people have been working really well together, the environment is much more conducive and friendly and the atmosphere really isn’t one of hate and contempt. I think originally the goal of the restructure was to make the atmosphere a better place and something that more younger people wanted to be a part of.

How have you worked with members of the Senate and other members of GUSA who may have shown initial resistance or distrust?

Ume-Ukeje: I think one of our biggest things was that we didn’t want to hold any grudges. The campaign was really challenging for us just on a lot of fronts, what people were saying about us and that being publicized on a campuswide platform. But we had multiple complicated conversations with the previous administration during our transition into office. We extended multiple offers to people who are working in the cabinet to come and continue to work with us because we know that these are people who really care about what they do.

What have you yet to accomplish that you hope to do before the end of your term?

Wolfe: The reputation that our organization has, even before we came in, is just unfortunate, and I think, although some of the things that were said about us in the press and in general are sort of unfortunate and negative, I think that GUSA provides a great platform for people to advocate and enact positive change on campus. I would really like for people to be excited about doing the work and in large numbers to come in again and make GUSA a really formidable organization that can work with the administration and put pressure on them when need be, to get things done.