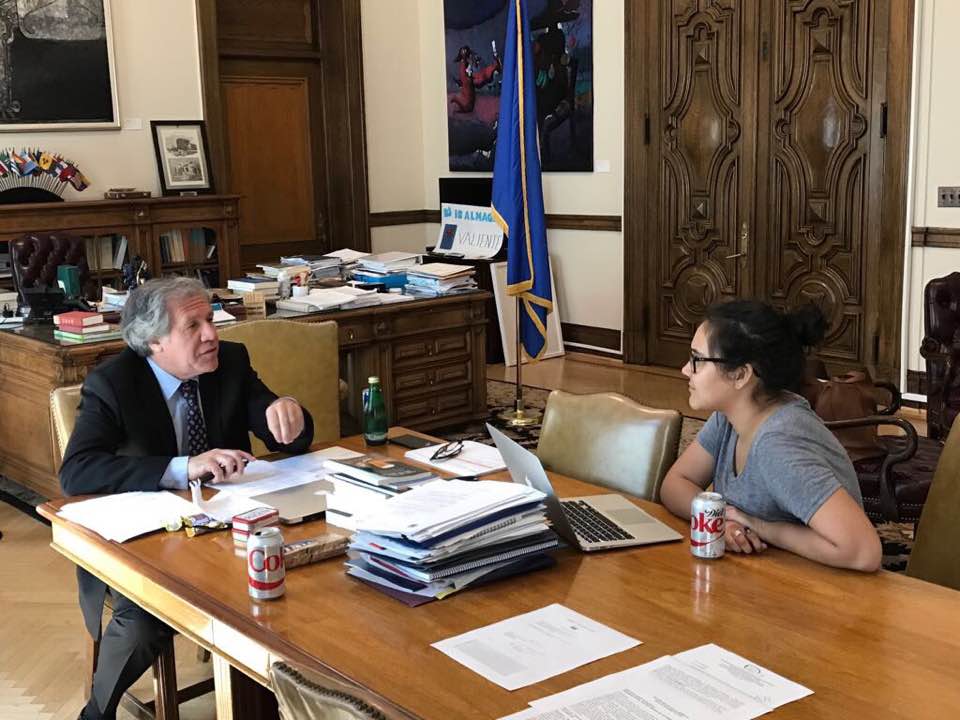 Two people were killed Monday in Venezuela as thousands continue to protest against President Nicolas Maduro’s government, which continues to be engulfed by political scandals and an economic recession.

The latest deaths bring the total number of people killed due to political unrest in April to 21, according to BBC News. The past month has seen a series of protests, politically-motivated shootings and clashes between security forces and protestors after a March 29 Supreme Court decision, reversed April 1, to strip legislative authority from the opposition-controlled National Assembly.

Since his contested election in 2013, Maduro has been unwilling to negotiate with the opposition and most international organizations, including the United Nations, the World Trade Organization, and the International Monetary Fund.

The Hoya sat down April 17 with Secretary General of the Organization of American States Luis Almagro,  one of the few international leaders who has met with Maduro.

Since taking office two years ago, Almagro has taken an active role in denouncing and countering Venezuela’s troubling practices, including documenting the Maduro government’s malfeasances in a 132-page dossier and calling for a referendum to recall Maduro.

In an interview with The Hoya, Almagro discussed the current situation in Venezuela and laid out his expectations for the future of democracy in the country.

What does the situation in Venezuela represent for the development of democracy in Latin America?

The situation in Venezuela is a major setback in the development of democracy in the American continent. First, because Venezuela is a country that had maintained a democratic tradition and during the ’70s and ’80s, Venezuelan governments assumed very strong positions in claiming democracies in the Southern Cone, which was experiencing dictatorships at the time.

It is a significant setback because, in general, the left should already have this conceptualization resolved. The left can and should only be democratic. After the fall of the Berlin Wall, there was no more space for the left to assume totalitarian or authoritarian syndromes. The case of Cuba remained isolated, with a process that hinted to an eventual opening.

However, with Venezuela practically violating, in its entirety, the principles of the Inter-American Democratic Charter, which represent the principles and values ​​of democracy, has caused a revival of the conceptual debate over a left that is not democratic on the continent, and that means a tremendous ideological setback for many of the leftist parties in Latin America.

What role has the OAS played in recent years in Venezuela? What has been the general disposition of the Venezuelan regime towards the OAS?

What the OAS has done during the time I have been here is to mobilize its efforts so that the regime no longer has impunity. The regime must assume its responsibilities and we have worked to end the impunity it currently exercises in relation to democracy and human rights violations. These efforts have relied on our two voluminous reports exposing the political, social and economic situation in Venezuela.

The Venezuelan regime has openly said very bad things about the OAS, and — something even more worrisome — has personally targeted the Secretary General, which is simply inadmissible. The regime has continuously expressed certain negative feelings and emotions to the work that has been carried out by the OAS in Venezuela. Venezuela is part of the recent Permanent Council resolution that discusses the country’s constitutional order violations, placing the Venezuelan issue very high on the OAS agenda.

Does Latin America continue to be a hospitable region for authoritarian regimes like the one in Venezuela?

In the future, the OAS will have to play an even larger role in Venezuela by dealing with the problems the country is facing: mainly, the lack of separation and independence of powers, the co-optation of the judiciary branch by the executive power, the oppression of the National Assembly, the existence of political prisoners and the humanitarian crisis itself. All these issues, we have to resolve them to help Venezuela regain its democracy.

What are the main instruments of the OAS to address the current crisis in Venezuela?

The OAS has requested the application of Article 20, which allows the Secretary General, or any state, to take the initiative regarding the constitutional order violations in Venezuela. Article 20 contains a series of procedures that are actually very constructive: diplomatic efforts, joint resolutions and other means seeking shared solutions with the country that is violating the Inter-American Democratic Charter.

When none of this works, there is the penultimate step, which would be the suspension of the country from the OAS framework. We hope that the gradual character of these measures and the progressive pressure they can create will allow for the reforms Venezuela needs.

You have stated that the solution to the crisis “must be for and by the Venezuelans.” How will the OAS reconcile this wish with the current democracy and human rights violations in the country?

To make a dictatorship fall, two types of pressures must be exercised. The first is the external pressure, which is the series of sanctions by which the international community condemns the acts of the Venezuelan government. Over time, the sentences have been very clear, condemning the government’s political disqualifications, repression, exile of political prisoners and weakening of the National Assembly. All this is part of a greater pressure that establishes that the international community does not accept these anti-democratic practices in Venezuela.

In relation to the future of the country, what does the situation of Venezuela mean for young Latin Americans?

The Venezuelan youth is assuming this commitment to act to protect the country’s future. It is a commitment that has a lot of generosity, drawing much tension and intention from the inside. The young man who faces the state’s repressive apparatus today is putting aside a comfort zone, but he knows that this comfort zone means having a life with no future, no perspective on tomorrow, because now, what can Venezuela offer to its youth? What is the prospect of a country that does not have vaccines for its people, does not have medicines to treat basic diseases, does not have food to ensure fundamental nutrition? From there, what kind of perspective of life can you construct?

The young are the driving force of change. Young people mean the hope of the country, and young Venezuelans have assumed a responsibility to their country, despite the tear gas dropped at them from helicopters, despite the snipers waiting on the roofs. The fact that the youth still has the courage to confront the regime means that the country still has a desire of democracy and has not reached the most abject stage of “Cubanization,” which is the worst condition in which a political system in Latin America could find itself nowadays.

What are the expectations about the future of democracy in Venezuela and the role of the OAS in the conflict?

The role of the OAS will continue to demand for democracy in Venezuela and for the better functioning of democracy in all countries across the American continent. The OAS will strive to ensure the protection and validity of human rights in Venezuela specifically, but also in relation to the rest of the continent.

Venezuela is a case of current crisis, and that is why it is such a serious concern for the Organization. While dialogue is the key instrument of democracy, this means that there must be a democratic spirit for there to be dialogue. The priority today is to restore democracy and dialogue.