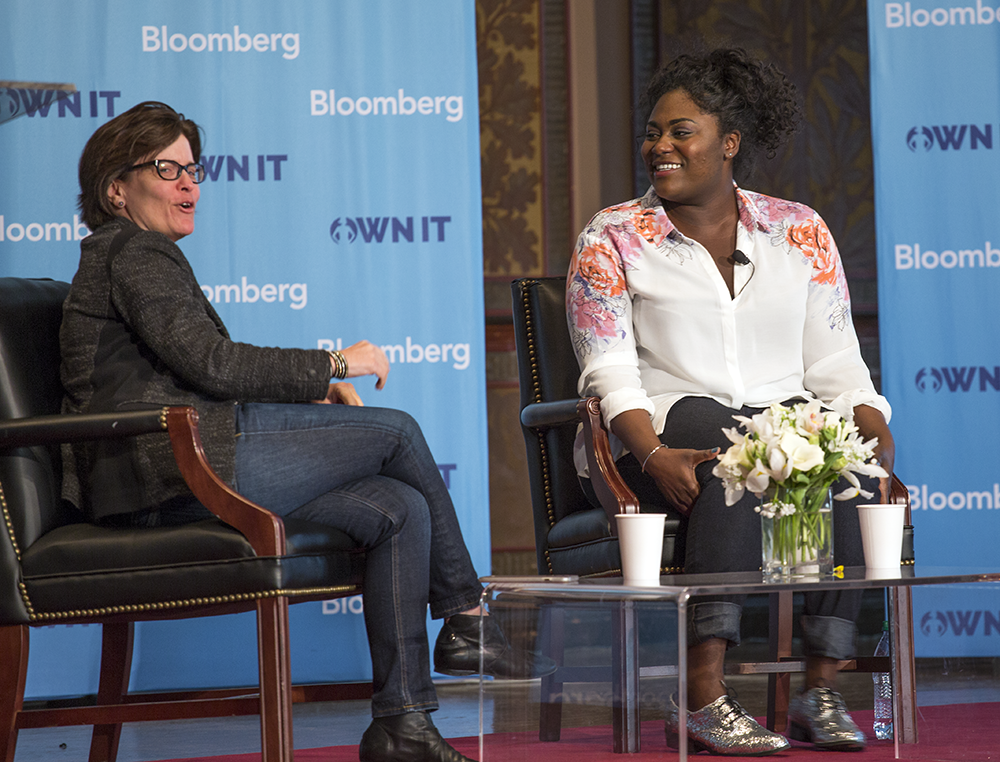 OWN IT and the Georgetown Office of Public Affairs hosted the second annual OWN IT Summit Saturday in Gaston Hall. The women’s conference aims to bridge the gap between young women and working professionals in a variety of fields.

Approximately 800 attendees from Georgetown and universities around the country including Yale University, University of Notre Dame and Johns Hopkins University attended the summit, which featured over 80 speakers and panelists.

The Hoya conducted exclusive interviews with five of the speakers. The interviews have been edited for clarity and condensed for print.

Danielle Brooks is an actress who attended The Juilliard School and now plays Tasha “Taystee” Jefferson on the Netflix original series “Orange Is the New Black,” which is in its third season.

What advice would you give young women interested in acting?
Brooks: I say go for it. Go full throttle for it. If you’re still green, get educated. There’s so many schools out here; it doesn’t have to be Juilliard. There are so many colleges that can give you what you need where you are. Go get some education. Educate yourself, and go for it.

How do you think that your character, Taystee, in “Orange Is the New Black” is exposing problems for women in the prison system in America?

Brooks: Taystee, you know, she is a child of the system. She has been in and out of prison her whole life. As we see in season one, I believe, she goes in and out. The reason she does is because in prison she had a home, she had a family, she had food on the table and that was comfortable for her. And that’s a problem that we’re having that, where do these prisoners go for rehabilitation? Where do they go to figure out how to live when they get out? And we don’t have enough of that. So I feel like, that’s really the purpose of Taystee when it comes to talking about the issues of the prison systems in America.

Mary Jordan is a Pulitzer Prize-winning journalist for the Washington Post who served as a foreign correspondent for 14 years in over 40 countries.

What’s your advice to young women interested in pursuing journalism?

Jordan: Learn how to write. Work hard. Read everything you can, and go for it because there’s never been more opportunities in journalism, actually. There are many more platforms now. You can blog and you can do radio and you can do print journalism. You can do video. There are a lot of places for people who are curious and just know that it’s a fun job. I always feel like it’s grad school. First, I was in Japan and learned everything about Japanese politics, and then I moved to Mexico and learned everything about Latin American studies, then London and learned about the British parliamentary system. I think journalism is so great, because it’s basically just learning every day and meeting really interesting people.

Norah O’Donnell is a print and television journalist who works as the co-anchor of CBS This Morning, and previously worked as the Chief White House Correspondent for CBS News.

What’s the biggest challenge to be a woman in journalism and how would you encourage young aspiring female journalists?

O’Donnell: I think there are very few challenges for women in journalism. I think it’s a great field for women to enter because it’s largely a meritocracy. If you write a good story, if you investigate something and break a news story, that’s going to be recognized. So, I think many of the talents that women have, which are interests in how policy affects people’s lives, answering the question of why something is, which is the heart of journalism. Those are well-suited to some of the skill sets that many women already have and I think journalism is a great field for women. We need more women in leadership in journalism, and that will take time, but I’m firmly convinced that we are at a turning point. Having met many of the women at Georgetown, I’m confident that we are going to have equality in terms of leadership in journalism very soon.

Megan Smith is the chief technology officer to the United States and was formerly the vice president of GoogleX.

What is the role of U.S. Chief Technology Officer and how have you adapted it?

Smith: The official job is to advise the president and his team on how to harness the power on data efficiency in technology on behalf of the nation. It’s a flexible job. It’s not like you’re supposed to run NASA or run IT websites for the government, it’s really an architecture job and a policy job. …
One of the areas we focus on is the American people. How do we help with skills or entrepreneurial access and what people are able to do, STEM stuff for youth and coding at school and that whole range of things to support the American people and top innovators can also help other people get into innovation. We call it “Innovation Nation,” it’s our nickname. Programs like Tech Hire that we launch that are helping people use code boot camps to get into. There’s five million jobs open in the country, so we’re trying to help people get into the tech jobs there.

What advice would you give young women interested in the technology field?

Smith: The universe doesn’t really divide the subjects up. In school you’re learning science, math, and English and history and music. Being fluent in all those different things is very powerful. … As a student, take a lot of time to sample some things and not shut the door because of stereotypes. Even in children’s television they have some crazy stereotypes. Out of every four characters on kid’s TV only one’s a girl. In STEM fields, only one’s a girl out of five, and in computer science cast on TV it’s fifteen to one. Which is not true for the industry, but it creates this bias in what you think you should do. And then you see classes skewed. But coding is just following instructions like following a recipe or following a list of things to do. Learning how to use that to make things and have impact on the world is really important. We sometimes make people afraid of tech. The way that we teach it, we make people feel dumb and bored and not have people teach by learning. You learn to read and write. But when we teach tech stuff, we teach all these facts, we don’t let you discover or make or invent.

Kara Swisher is a technology journalist who serves as the executive editor of Re/Code, a tech news and analysis website.

As moderator of the Innovation Panel at the summit, what were you trying to get across?

Swisher: Innovation can come in many forms and where is it going. And we have to think very hard as to how we can stay as an innovative country. The U.S. is a leader in technology and innovation but it’s going to lose that fast to China and India and countries that are doing some amazing things. The question is, are we educating our people in a way that is necessary to keep that going, are we providing visas in a way to bring in talent from all over the world, do we have enough focus on the fact that this is going to differentiate ourselves and bring us into the future for a better country and a better world.