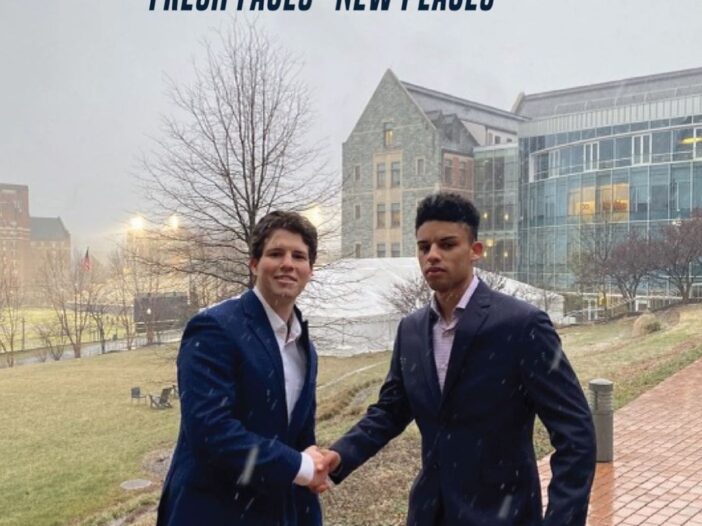 [Disclaimer: Kole Wolfe served as a Staff Writer for The Hoya in spring 2021.]

If elected, what are your top priorities?

Ume-Ukeje: We have a couple ideas about general GUSA meetings, like every once in a while opening it up to students on campus by just allowing them to come into the meetings and give their ideas and voice their concerns. That way, people can actually come in and tell us what they want to see changed, what’s going on in their dorm, what’s going on at Leo’s [Georgetown’s primary dining hall], whatever it might be, so we can hear it.

Wolfe: There is one thing that we actually had a lot of thoughts about: club culture. We’re working on getting in contact with the Center for Social Justice about a plan to create low barrier to entry clubs targeted on direct impact in the Georgetown community.

Many students in the campus community are confused about GUSA and feel that it is ineffective. What do you think sets you apart from previous GUSA presidents and vice presidents?

Ume-Ukeje: We feel like we represent a good portion of the student body, and we don’t really know what’s going on with GUSA. We weren’t really too aware of how their work is affecting our day to day life. We wanted to just bring complete transparency, whether that’s weekly emails, whether that’s a more active social media page, whether that’s putting more stuff on our own personal Instagram accounts to let students know about what’s going on.

How do you hope to change, if at all, interactions between GUSA exec and the administration?

Wolfe: We’ll go into it looking to establish a positive relationship early and often. I think part of it is putting up some resistance when needed and speaking for what students actually want, because there is obviously sometimes an apparent disconnect between the administration and the student body and some policies that they’re implementing.

Ume-Ukeje: I think sometimes when GUSA speaks with the administration, the administration sees it as speaking with just another organization, as opposed to just a couple people who represent the student body and what the students really want to see happen on campus. At the end of the day, we’re just two normal students. We’re not trying to put ourselves on a pedestal by being GUSA president and vice president, we’re just there to speak for how the students feel. I think that’s sort of something that’s not really there right now.

What do you think is the most effective solution to addressing residential safety issues?

Wolfe: I think one of the things that could definitely be done is forming an association of students who live in each dorm, not to actually take direct action but to be vigilant. Obviously the RAs have a lot of responsibility already, but if there was just some sort of team who would scan the hallways for one minute every night on their different respective floors, just trying to keep in mind that, ‘Okay, we’re probably going to be safe, but you know, safety is priority number one. And then, okay, I look down the hallway, I see some dude with a knife. That means it’s time to call some serious backup.’

Ume-Ukeje: There could be resources devoted to hiring professional security guards, obviously taking a hands-off approach and not really being too present, but in case the need arises where there’s a clear threat to students’ safety, they have the training and the wherewithal to step in and make sure that no one gets hurt.

How do you plan to pressure the university to act on the GU272 referendum?
Ume-Ukeje: We want to make sure that the university is holding up their end of the bargain, whatever that might be. I don’t know what that bargain was, I don’t know what deal they struck. But it feels like this issue is being avoided a little bit too much. So we want to, number one, pressure for transparency. Once you step up the noise levels, then they’re going to be forced to make a move to correct their lack of movements so far.

This article was updated on Feb. 3 to clarify Wolfe’s previous role at The Hoya.