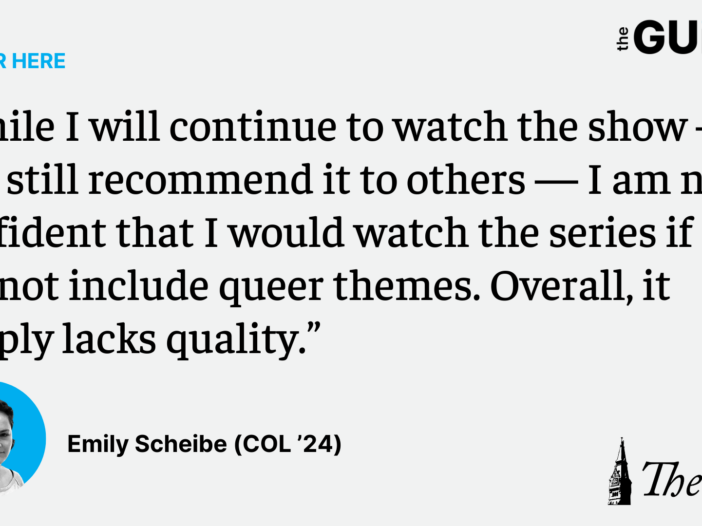 Welcome back with another lesbian teen romance — but this time, instead of a movie, we have a whole series! On June 10, Netflix released “First Kill,” a supernatural drama surrounding teenage monsters and monster hunters. While the series is groundbreaking with its showcase of lesbian media in the supernatural realm, its poor execution makes it a cringeworthy watch that will likely not appeal to anyone other than those hoping to watch queer TV.

The genre of “First Kill” makes it particularly memorable as queer media. While previous supernatural movies and TV shows such as “Jennifer’s Body” and “Supernatural” have often hinted at queerness, a dark mythical series dedicated to a full-fledged queer romance is rare. In “First Kill,” we follow an undercover vampire named Juliette (Sarah Catherine Hook) who develops a crush on monster hunter Calliope (Imani Lewis), with the relationship soon blossoming into a full romance.

Within this world, set in what appears to be modern-day America, the viewer is slowly exposed to the history behind why these creatures are hidden among society and who is meant to keep them in check. The monster lore is well done and interesting to follow, and the way this background revealed itself was deserving of the show’s dark themes.

In the beginning, we are introduced to vampiric life through Juliette’s family, after which we find out why and where the monsters are hiding in otherwise modern society through Calliope’s family. There are some great surprises throughout the show because of how they slowly reveal the background, keeping the audience on its toes.

However, the poor CGI, acting and writing failed to sell the show in the end. The underlying Romeo-and-Juliet theme felt cheap and unnecessary. Not only is one of the character’s names derived from the Shakespeare play, but they even reenact a scene from the play. It was excessively obvious as a reference, and the fact that this overused trope was applied to a queer couple did not make it feel any less overused.

The acting was jarring at certain points, and I wish that the two main characters had more chemistry. The first episode was well assembled, but everything after felt like it was trying to catch up in quality.

Some areas did stand out: the moms were great actresses, especially Calliope’s mom Talia (Aubin Wise). She displayed great acting as a lovable, sympathetic character. Other likable characters include Juliette’s sister Elinor (Gracie Dzienny), but overall, the show missed the mark with its execution.

As for how it handled queer themes, the show seemed fairly accurate in its portrayal of young queer people. For instance, there is an unhealthy closeted romance that a gay character leaves, showing a responsible depiction of that type of situation. Closeted romances are often emotionally taxing, and it is good advice to young queer people — who will no doubt be watching the show — to leave that kind of relationship.

The outfits of the two main characters were also excellent, and they both fit within the modern queer spectrum and the characters’ personalities. Juliette had a preppy wardrobe with lots of queer collars showing, and Calliope had a more feminine and modern clothing set. While the main romance is free of “coming out” or other external homophobic pressures, such as wanting parental acceptance, the show did suffer from confusing sexualization.

The show felt mildly oversexualized while still somehow underdelivering. Advertisements for the series seemed to be selling it as a “sexy” show, making it very clear “First Kill” contains two sexually involved women with the suggestive phrase, “You never forget your first.” Aside from the first episode, however, the show contained few scenes where the characters even kissed. There is a very brief sex scene, but it did not feel natural at all.

Advertising the show with sexual themes and then delivering these themes would have made sense and fit well with the drama’s audience. But the advertising, combined with the awkward pecks between Calliope and Juliette throughout the series, suggested that lesbian sexuality had been used to drive views.

Considering that lesbians in media have often been oversexualized in the past, the writers may have been attempting to avoid that trope — or maybe we are all just used to lesbians being heavily sexualized whenever they get screen time. In any case, I felt let down when the characters’ chemistry barely existed, especially since that chemistry was used almost exclusively to advertise the show.

While I will continue to watch the show — and still recommend it to others — I am not confident that I would watch the series if it did not include queer themes. Overall, it simply lacks quality. I hope that Netflix puts more effort into the show for future seasons, as “First Kill” definitely has potential to become something great. I am grateful that we have a queer supernatural romance, but regardless, with poor execution comes a poor product.

Emily Scheibe is a rising junior in the College. Queer Here will appear online every other week during the summer.