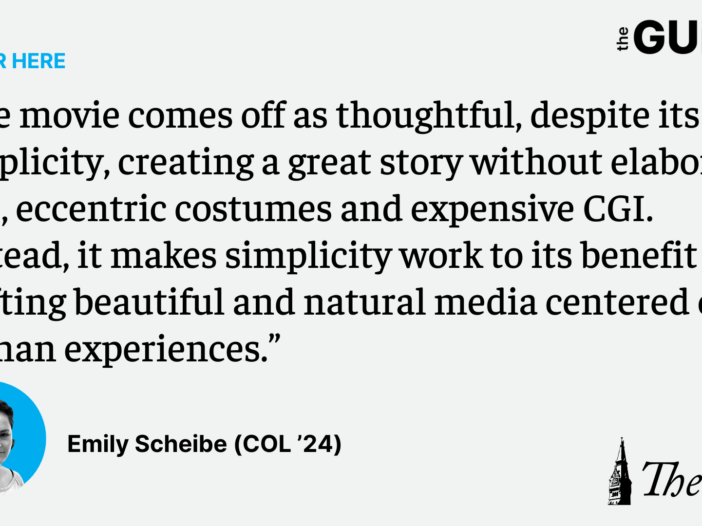 “My First Summer” follows the story of two Australian teenage girls, one of whom navigates an extraordinarily horrific upbringing while the other escapes loneliness and bad parenting. Released in 2020 and directed by Katie Found, this movie is a must-watch for its flawless artistical and technical execution and queer relatability.

The story focuses on the two young women and the development of their relationship, including insight into a dramatic storyline about an orphaned child raised under questionable circumstances by her mentally ill mother. The dark themes, while disturbing, are thought-provoking. The perfect chemistry between the two main characters, Claudia (Markella Kavenagh) and Grace (Maiah Stewardson), pulls the whole concept together.

The movie also presents its queer themes well. The relationship between the main characters develops naturally into a romantic one, without queerness mentioned explicitly. This casual approach is part of what makes “My First Summer” a great addition to the already existing queer movie catalogue. While it can be wonderful to have queerness explicitly mentioned and discussed, having queer relationships develop organically through a close friendship provided a fresh perspective.

When I was younger, I was always jealous of straight movies where there were no queer roadblocks to navigate — no coming out, no fighting for legitimacy — just natural tension of a friendship that developed into a romance. By contrast, “My First Summer” ignores heteronormative gender norms, making the film revolutionary for its queer audience. Moreover, the characters’ isolation in a woodland enclave, with no friend group distractions, allows viewers to witness a pure relationship develop.

In addition, the romantic tension is unmatched. There are so many scenes sprinkled throughout the film that leave the viewer breathless, waiting to see if the relationship will grow more intimate. This experience is relatable to queer people; trying to understand if that skin-to-skin contact is a friendship or something more is an essential queer experience.

The movie’s cinematic prowess through its directing, acting and writing is another reason I would recommend it. Every shot felt like a breath of fresh air as viewers explore the woodland home of the two young lovers. The aesthetic themes of the movie were a wonderful expression of queerness, as the cottage aesthetic is popular among women-loving women, and the scenes of the gardens add a stunning level of beauty. The outfits, especially Grace’s, are frilly, extravagant and overwhelming. They match her blazing personality as Grace brings light and joy into Claudia’s life. The contrast between Grace’s lively character and Claudia’s more reticent personality was a wonderful directive choice that offered a more grounded, realistic view of their romantic relationship.

“My First Summer” is full of mature topics and is marketed towards adults. I think the movie could have instead aimed to provide queer representation for a teenage audience, who would probably most appreciate seeing the two 16-year-old girls fall in love. When I was a 16-year-old girl, a movie like this one would have been life-changing for me because I was used to only seeing lesbian content in the adult sphere, often riddled with explicit humor and sex scenes.

The isolation in which the girls lived also meant that the movie lacked diversity to a significant extent. It mostly follows the story of these two young women exclusively, with minor intervention from the outside world. This choice is wonderful in that it centers on a women-loving women relationship, but this perspective excludes racial diversity and further mentions of queerness.

The acting and directing were much better than many queer shows and movies released recently, like those that I have covered previously in my columns. The two actresses do a wonderful job of portraying their characters with authenticity, humor and grace. The movie comes off as thoughtful, despite its simplicity, creating a great story without elaborate sets, eccentric costumes and expensive CGI. Instead, it makes simplicity work to its benefit in crafting beautiful and natural media centered on human experiences.

Keep “My First Summer” in your mind as fall approaches, and make sure to keep an eye out for upcoming queer movies, shows and books!

Emily Scheibe is a junior in the College. Queer Here will appear online over the course of the fall semester.